Issue:
Point of Sale at Walmart in Orlando Florida was declined and had to use a family members Halifax card to complete purchase 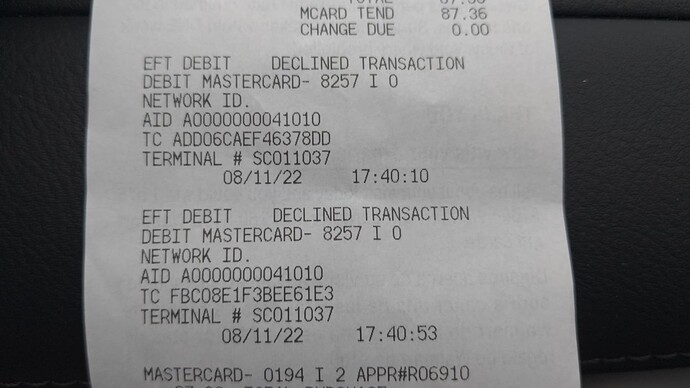 Is there a decline reason in the app?

(I’ve moved this thread for you, this isn’t a bug)

Have you turned on the magstripe feature some merchants in the US still swipe cards to take transactions right?

At least from what I remember. So this is my first thought too. Monzo has magstripe off by default, but most other banks have it on.

I’m curious, because Monzo know when and where you’re travelling to based on location, are there any context aware prodding for this case? A notification that says “Hey, you’re in America, most retailers use mag stripe, you need to turn this on in settings” would be really nice.

Monzo has magstripe off by default, but most other banks have it on.

But only for ATM transactions, right? I’ve had my card swiped (and accepted) in the States without doing anything to enable it.

Is it not stores too? I’m sure Boots tried swiping mine once when it couldn’t read the chip and it got declined. I think back then (maybe they still do) Monzo sent a notification explaining why. May be a phantom memory though. Several years ago now just after I began using it.

I think it’s different in the UK, where the terminal asks you to insert the card instead?

Looks to me like they tried to process it as an ‘EFT DEBIT’. EFT Debits - as far as I know - work only for US issued cards.

Were you asked whether your card was a debit or credit card? When abroad, you should choose ‘credit card’, even though the Monzo card is a debit card: Many countries assume your card is a local card when you select ‘debit’, and try to process your card through their domestic card network, which will fail.

No decline reason in the app. Strange thing is I went to home depot and JC Penney afterwards and no issues with using the card.

Only Walmart seemed to be the issue. There was no prompt during check out to select debit or credit card.

This happened at two of their locations to both me and my girlfriend who had Monzo cards.

I did try use the mag strip but it told me to insert the card and use the chip and pin. I input all my details and then it hung on their self checkout before telling me it the payment failed.

If there’s no decline in the app it didn’t get to Monzo and it’s the retailer declining.

The US possibly has the most complex point of sale (POS) debit payment system on the planet. Anything could have effected the transaction before we even get Monzo involved. Its processing network is also quite backwards compared to Europe and much of the world.

As has been mentioned a large number of US debit cards now use chip and pin, but most US credit cards use chip and sign to authorise transaction. Chip and PIN working depends on the merchant and the middle-man processing network they are using. Generally US bank accounts work best with it, but its not impossible, depending on the merchant etc.

Credit card payments tend to be accepted much easier because US credit cards, and its network, are much less secure than European ones, hence why it uses chip and sign. Whilst less secure, credit cards use the major processing networks easier.

I suspect you’ve hit the nail on the head here!

I have the same issue occasionally but in South America. There are always 1 or 2 merchants where it just does not work. I never use the strip, always insist on using the chip/pin or contactless.
I have the Aqua credit card which has never failed me. Have that for the larger purchases and as a backup.
Also getting the new Barclaycard Travel Rewards card in a few days, great for travelling also.

true - when I say it is a debit they always say but it says credit on the system and it goes through as a credit card transaction.

I always use the credit option in the states, debit tends to refer to a different way of processing payments for local cards.

I just had exactly the same problem at exactly the same store! This was at the self service tills. There was no option to choose credit or debit. It didn’t even reach Monzo as there’s no decline reason in the app. Luckily I was able to get cash out from the ATM inside the store, but wasn’t ideal!

Interesting. Mine was my primary means of payment in Secaucus (NJ) for a while and got a lot of use at that Walmart.

Wonder if it’s just that one Walmart that has issues or if Walmart overall has changed their system? I recall it being a chip and pin last time I was in one.