Issue: when opening the app the transaction pane is often blank. Transactions reappear later so no huge issue, just wanted to let you know. 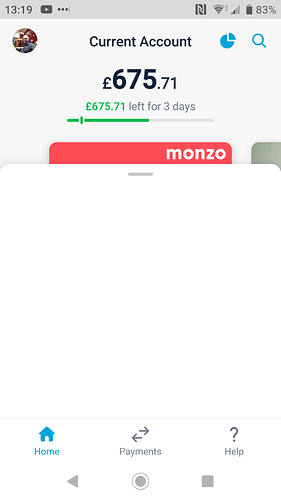 Mine does it all time and has for about 3 weeks, uninstalling didn’t make a difference, I’ve just gotten used to exiting app and going back in

It has been doing that for me ever since the new nav launched. I just need to switch tabs.

I see this pretty regularly too on my Samsung S10e. I flit between tabs, sign out, sign in… eventually it works. There doesn’t appear to be any one thing that consistently forces it to reappear though.

Tap on ‘Payments’ then tap on ‘Home’ and it’ll refresh. While not ideal, it’s quicker than exiting and re-starting the app.