After the honest news today, I think it’s safe to say Monzo has now done everything (in my opinion) that makes up ‘Trust’ - the least likely thing I ever thought of finding in a bank …

The Predictability that whatever is upcoming, being planned or just a vision will be done with ‘community’ at the forefront…

The Value Exchange rather than money for service, I believe Monzo recieves feedback, appreciation and the want to make a positive change as just if not more important…

The Delayed Reciprocity that Monzo expects that the rapid speed of changes, the updates and high expectations of a free banking service all in hope that we will be here for the long run.

Finally the Exposed Vunrabilities that come with being open, accessible and free to everyone, and the trust that deserves in return.

Ok, I’m biased as a fan, but wanted to have a ramble about my opinion

You haven’t said anything that’s not true.

The fact that this forum is as popular as it is shows testimony to how good Monzo are and how they’re helping turn a boring topic i.e banking into something exciting that people want to talk about

Absolutely agree. The handling is impeccable.

After the honest news today,

Have I missed something?

Our story from behind the scenes:

Just the whole background into being proactive and spotting ticketmaster issue months ago and reaching out to them, replacing cards despite Ticketmaster saying no issue, the proactive not reactive approach.

Thank you all for your kind words

We’re lucky enough to have always been in a position where we can be guided by doing what’s right for the customer above anything else, with a company full of amazing, empathetic, intelligent people.

Trust can be lost in an instant, and that’s really what’s at the heart of radical transparency. Holding ourselves accountable for every decision, and being able to explain the thinking behind the decisions we’ve made.

We work very hard to maintain the culture that we’ve built as we continue to grow, and you’re all a huge part of that, so we have you to thank as well. Getting your thoughts, opinions and feedback in real time as we build out our product is truly an amazing thing

That’s a great story, but “honest” is a strange way to describe it. I thought Monzo must have admitted to doing something wrong!

That’s a great story, but “honest” is a strange way to describe it. I thought Monzo must have admitted to doing something wrong!

I guess that’s right, I meant honest as in details in spotting X amount of users affected, cancelling all that time ago just because they ‘shopped’ at Ticketmaster without actual ‘proof’… But guess transparent rather than honest, my bad.

The news got viral even on LinkedIn.

Recently was convincing my friend to join and there we go: 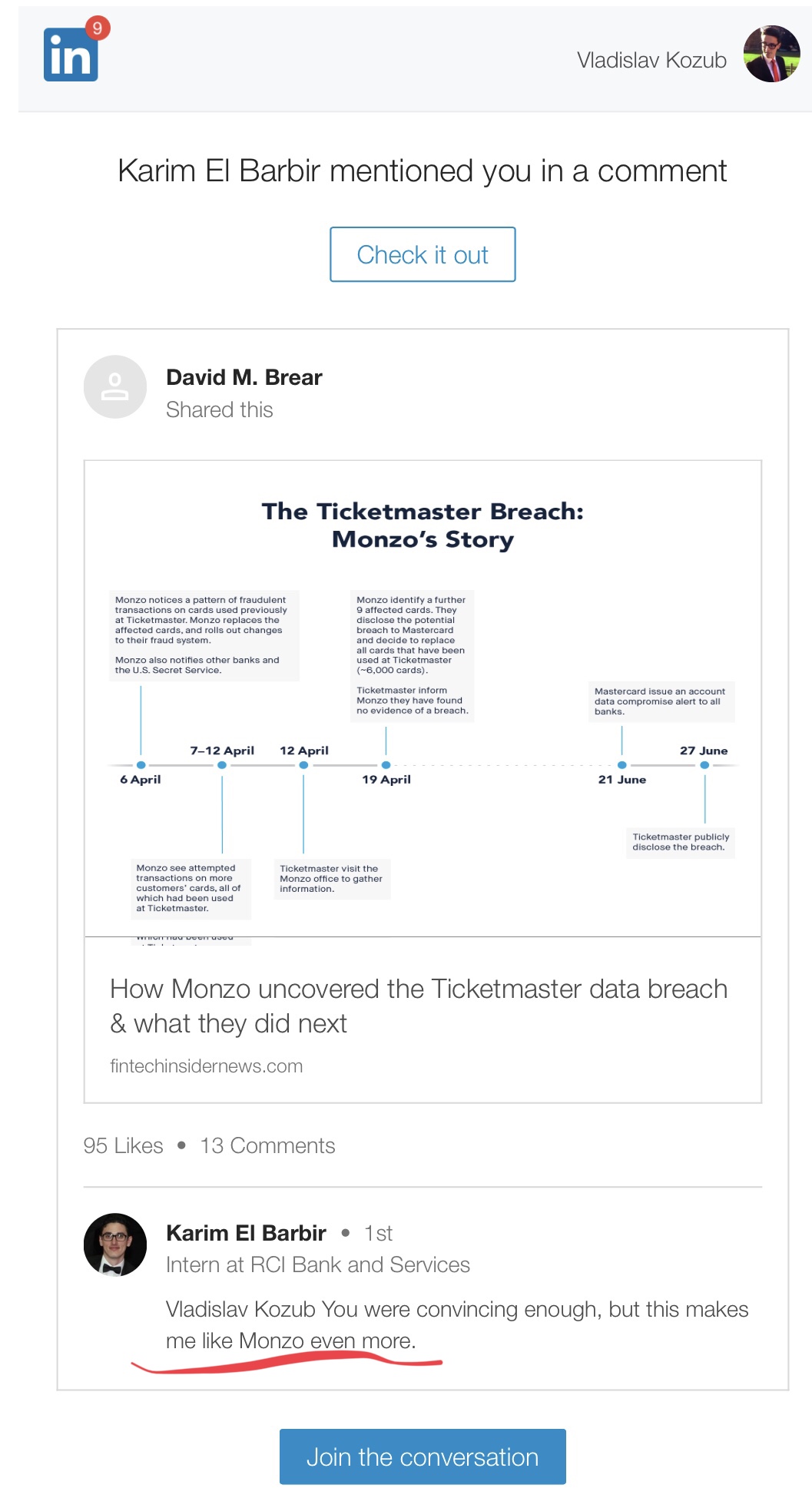 Monzo really is showing the banking industry how it should be done!

I also remember one time before I signed up to Monzo, I went to another legacy bank to open an account with them, told them honestly about my past credit issues and was basically told ‘the system decides what account you can have, and you just have to suck it up’ Needless to say the account didn’t stay open for long! At the time, I was wanting an additional account to manage bills, and I was also spoken to like dirt on the phone, spoken to disgustingly by a very rude woman. Therefore, I ended up telling them where to stick it after I found Monzo.

I’m absolutely gobsmacked at how different things are here. I’ve never had a bank before that actually talks and treats you like a real person!