I have thge full system in UK if anyone has any questions on it feel free to ask me !

HI there - just bumping this thread again. One year later, how has your experience been? Moving into a small ground floor flat and thinking about Simplisafe. Thanks in advance!

Hi David, one year on, what has your experience been? Would you still recommend Simplisafe? Can I also ask if you were able to identify the cause of your false alarm and manage to “address it” to prevent it in the future? Thanks in advance!

Hey, yeah I still use it and am very happy with it.

Brilliant, thanks for replying. They have some good sales on now so think I will jump in ahead of moving to our new place. Thanks !

If you haven’t seen this video - you should def take a look:

SimpliSafe has a pretty major flaw:

I’m not sure what’s changed since that was posted, but it’s worth checking on it before you decide

So, not to suggest this source isn’t credible, or wirecutter are inherently more credible, but I was looking at alarm systems recently and they had this to say: 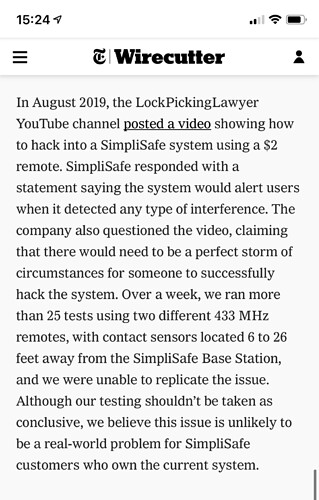 So if systematic testing with a variety of scenarios can’t replicate, doesn’t seem that worrying.

thanks for pointing it out - I did see those reports from a while back. it seems 1) new software means comms with it are now encrypted. and 2) also seems a corner case, or not unique to them. For example if you bring a massive jammer into the picture, might disable 4g mobile data, wifi, everything. For now, seems to be sufficient, so think I will give them a try. Thanks to everyone who has come back to me!!

The SimpliSafe system works very well but it is a shame that you need to pay for active monitoring to get app alerts on your phone if the sensors detect something. No cost for having the SimpliSafe indoor camera send alerts but entry sensors and the like require a subscription.

Similar systems from the likes of Ring or Eufy don’t seem to charge anything for app usage (arming/disarming system, alerts) but SimpliSafe seem set to continue with their current charging scheme.

Thanks for letting me know it works for you!

I agree that it seems a bit stiff of them to not provide app functionality if you’re not paying. Fair enough that you have to pay for full monitoring functionality, but alerts / remote control seem like they should be included with the hardware.

As part of having an alarm system I am assuming that I’ll have to pay for monitoring, and Simplisafe’s monitoring seems competitive compared to some of the other solutions, so won’t be an issue for me, but I do agree with you.