We teased it a few weeks ago, and you’ve been using it in Labs, but now it’s officially live in the app!

Check out the announcement blog post for the full details 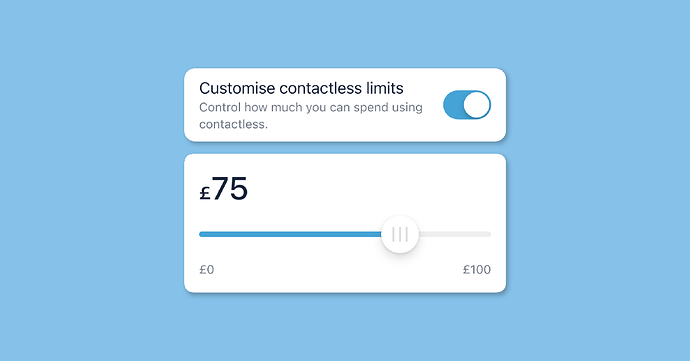 The flexibility to set restrictions that work best for you and help you feel in control.

22 Likes
Guess the feature coming next week 👀 (REVEALED: Set contactless limits to levels you're comfortable with)
phildawson (Sorry, I will have to escalate this.) 16 December 2021 12:37 #2

Good to see Monzo have finally caught up with other banks on this.

One of the things that could tempt me back to Premium is the option of an all-metal card without the plastic contactless layer.

Yeah, that was a torturous 7 weeks.

And turning off contactless other banks have had that for ages. I imagine most people that use the feature will be sliding it to zero or they aren’t fussed.

It’s quite possibly a complex thing to do, and with resource and the launch of other innovative products being rolled out or worked on, someone handling their own contactless levels is probably lower down the list.

Security is good, and the ability to amend is good, but nothing is more important than being responsible for your own card - including as and when it can be used.

I would love to see stats on how few/many actually use this. RBS does not have limits in its app so far so I wouldnt expect Natwest to have it either and they are a huge group.
Its not like when starling knocked off bill pots people went “finally caught up” but when its monzo people love to take pop shots.

To be fair to Monzo and Starling here, a lot of people did say that!

I would have been nice if Monzo were one of the first banks to offer this feature, but they are still launching it relatively quickly so too much criticism is a bit unfair.

Starling’s pay from spaces, though, was something people requested for years before it launched.

Its not like when starling knocked off bill pots people went “finally caught up” but when its monzo people love to take pop shots.

Only they did as @SebH mentioned.

People should be firing as many shots as they want to pop.

The amount of people who jump out to defend Monzo at every turn is nuts. It’s akin to Apple fans who won’t have a bad word said about the company’s products.

You wouldn’t get that level of defensive posting on a Halifax or HSBC forum.

It’s more against Monzo because well it’s Monzos forums and Starling has one thread. When the Starling forum was alive people gave them both barrels. Although Starling are a sensitive bunch and wanted every word to be positive or shut it down, doesn’t feel like Monzo cares either way if a new feature is well received.

@Revels just came up with an arbitrary 7, you are just mindlessly repeating it. Banks have had the controls disable contactless for ages, as you mention both NatWest/RBS you could do it in app. Being able to set a specific amount that’s newish sure, how many will do that probably not many, all or nothing I’m guessing.

The different thread where you doxed me in the hope of bullying me? Move on with your trolling.

The limited increased 15th Oct. I didn’t just make up that it was 7 weeks.

At least it’s given you something to moan about.

I am not sure how many used the labs option prior to the ios update today but if you did has it worked okay for you?

I probably should have added a few wink faces and eyerolls. It couldn’t be further from an actual moan, but I guess it gave some ammo to have a counter moan back.

User ignored so I can avoid this problem in future.

has come early. Could have just been an apology and move on but I’ll take it.

Like someone said earlier id doubt cery heavily that this will be used by more than 10% of monzo users.

Kind of feels like when atms stopped doing £5s, small vocal minority thought it was crap when it was forced on us but it was obvious why. a higher contactless limit is more than welcome and been proven to be secure so no point moaning for the sake of it

TBH though it was awesome back in the days I still used cash to find an ATM that dealt out fivers, especially as a student

And the 9 is literally just the number of weeks back to when the contactless limit was increasing again.

It was back on 3rd March 2021 (9 months+ ago) this was announced, which is why banks implemented the ability throughout the year.

Starling just happened to decide to launch their feature on the exact day the amount increased again. If we are using that rival date then Monzo were two months late to the party in providing the ability to control the amount.

Does anyone care, about the ability to set a specific amount probably not, or not many.

However I’d expect people do care about the basic ability to simply disable contactless that we’ve had with other banks for literally years.

So you could say Monzo are years late to the party in giving you the ability to turn contactless off.

TBH though it was awesome back in the days I still used cash to find an ATM that dealt out fivers,

I never had that

I did find cash in the self-serve checkouts quite a bit but they don’t offer cashback anymore. Possibly for that reason

Sainsbury’s* still do £5, just need to press other and type 5.

*your experiences may differ, my local ATM does.