Thread for all Revolut feedback/discussions.

Most of my EU friends have been using Revolut for quite some time and overall happy with the service.
Revolut is in the process to become a fully licence bank and offers some interesting features like phone/travel insurance, loans and business accounts.

They were in tech news for past few days after the flowing announcement;

Revolut is merging traditional banking and cryptocurrency to let you buy, sell, trade, and hold Bitcoin, Litecoin, and Ether alongside 25 world fiat currencies. The $90 million-funded mobile banking startup is trying to erase the divide between old...

Your step by step guide to understanding cryptocurrencies.

I was interested in the crypto-currency trade they offer so decided to give them a go. OMG!
My 2c of experience so far: 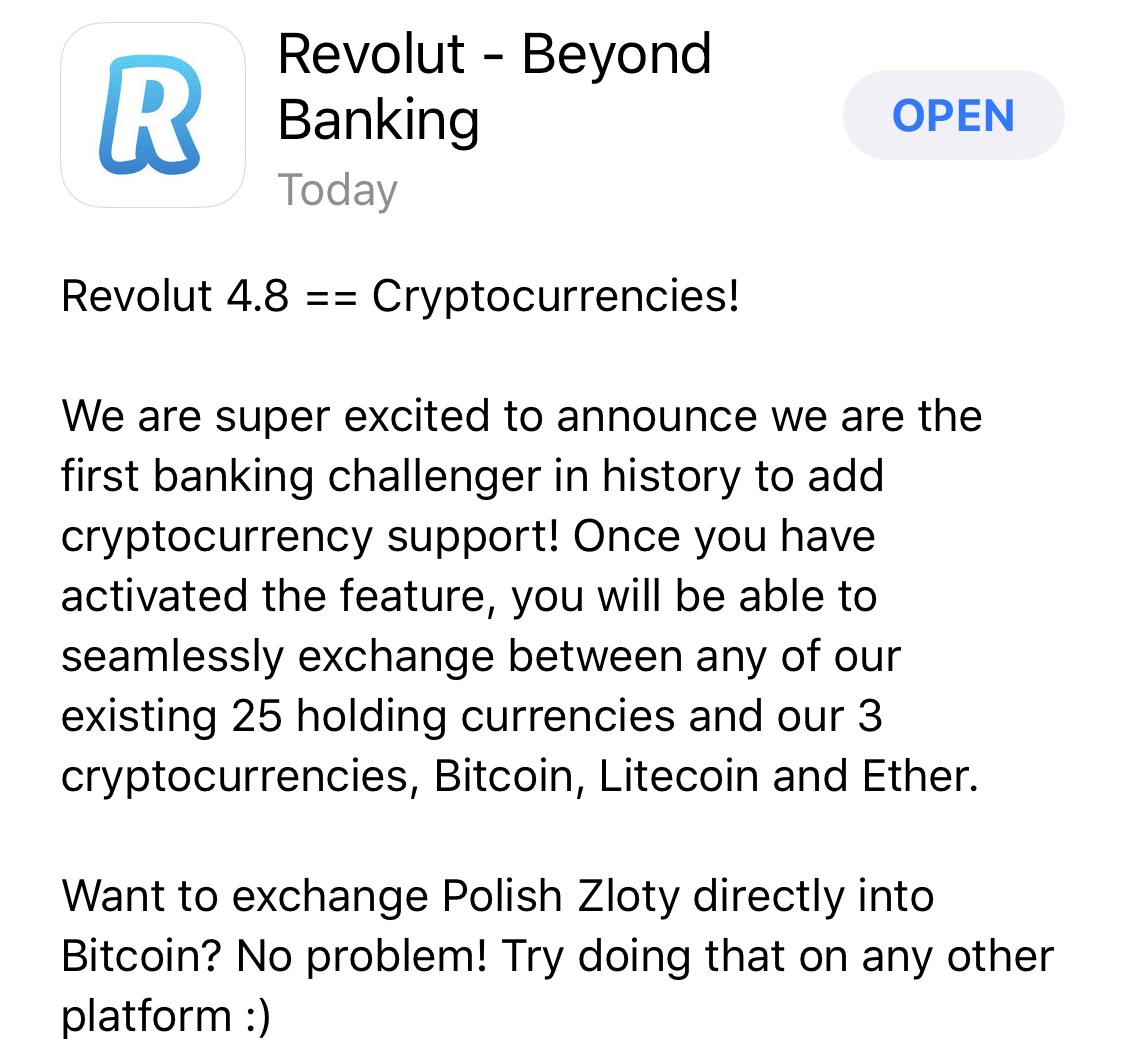 Well even you would have been able to sign up you couldn’t use Crypto unless you get a premium account or friends to sign up. Just not a great start I think 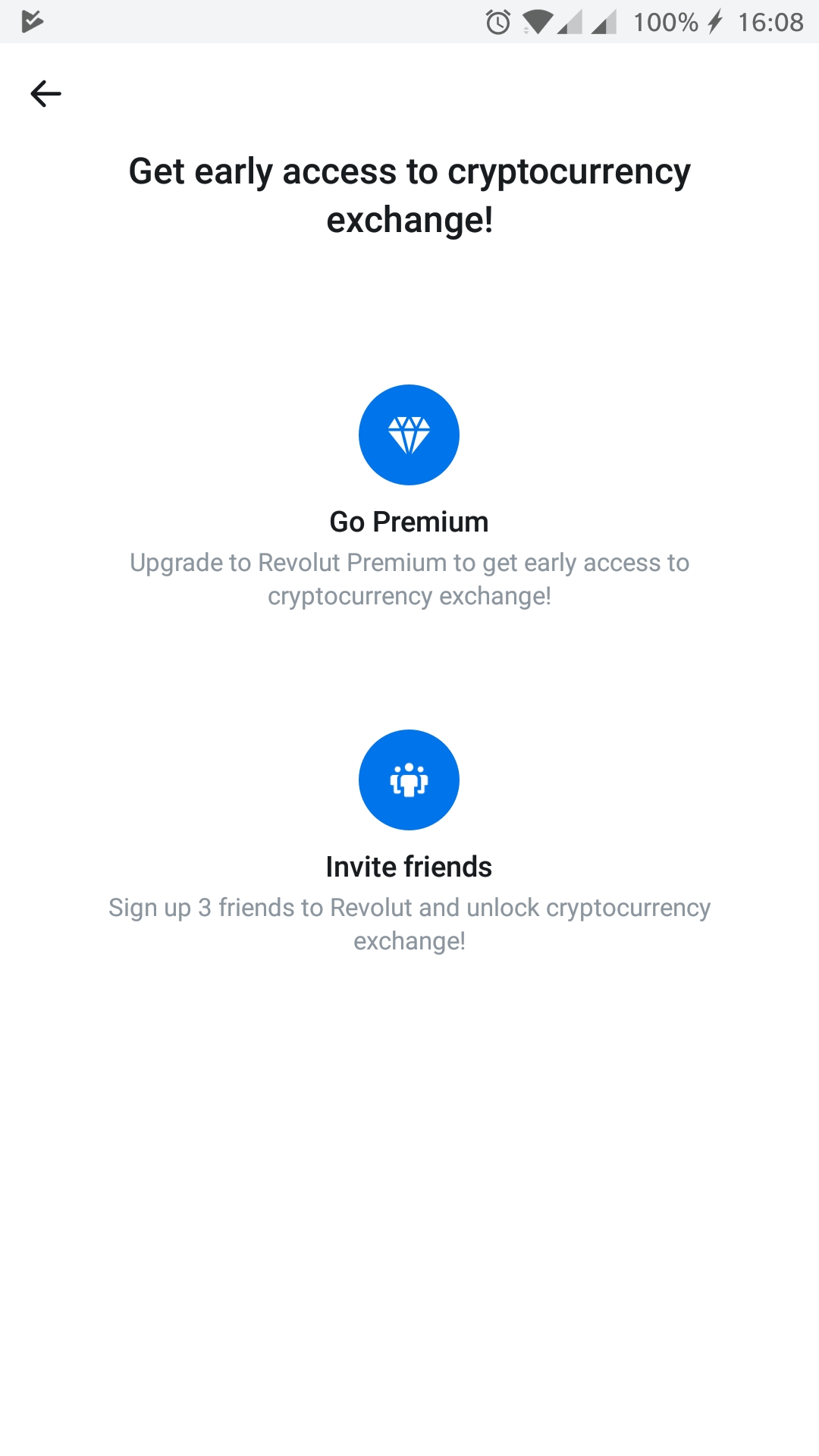 ven you would have been able to sign up you couldn’t use Crypto unless you get a premium account or friends to sign up. Just not a great start I think

If there’s anyone with Premium account would they share what fees they offer and how those compare to Coinbases?

Yes I would also like to see how this will work and compare with existing solutions. Please share your exprince if you’re have access to this already.

From what I’ve seen : Revolut don’t allow you to send crypto to an outside wallet. This seems like a major flaw.

Thats correct from the original press release in August I think. You can spend money to buy bitcoins but you must sell them to do anything with them. It didn’t say this bit but I think they did it so they could claim they were ‘clean’ bitcoins with a paper trail (money laundering etc).

ect from the original press release in August I think. You can spend money to buy bitcoins but you must sell them to do anything with them. It didn’t say this bit but I think they did it so they could claim they were ‘clean’ bitcoins with a paper trail (money laundering etc).

Surely the cleanliness would not be problem for exports into other wallets, but only for imports? Why would they care how I spend my own money

Re-finding that blog post, it’s more about limitations of the current platform offering. They plan to open transfers in the future.

We’re looking to release Phase 1 within the next few weeks, and hope to support external transfers in the near future — we’re working closely with our biggest financial partners to make this a reality. Revolut believe cryptocurrencies will play an increasingly important role in global financial services and hope that our initial adoption will help to bring crypto to a wider audience.

How Revolut are leading the way with cryptocurrencies

Here at Revolut, we are constantly evolving our platform based on the feedback we receive from our customers. One aspect that has repeatedly cropped up is cryptocurrencies — a digital currency.

Currently they say the crypto service is only for premium customers

I think they had a surge in sign-ups because of the crypto launched that caused them some issues.

I haven’t used them so I can’t comment on their ‘normal’ service levels but you may have just been affected by a spike in activity.

Not great but could end up being a shrewd move to grow members if they sort the issues out.

Apparently they are going to make it available to everyone in two weeks. The requirement to be premium or sign up friends is only for early access.

If you want to try it: https://revolut.com/r/simoneieh!crypto

I think Revolut is really struggling with this whole Crypto move.The Revolut forum is full of people that don’t get the support for just normal banking stuff at the moment. I had the same situation. Because I don’t really use the product anymore I just contacted them via twitter, which seems to be the only way to get some sort of support and they told me if I close the account I can’t re-open during 5 years?!

There is quite an interesting video online that somehow just shows how different the company philosophies are:

Do Revolut charge £5 to get a physical card?

Do Revolut charge £5 to get a physical card?

If I remember correctly any extra card costs £5. It doesn’t matter if this is a virtual card in the app or a physical card. I think there is also a delivery cost charge if it is a physical card. Don’t quote me on that though, back when I joined the physical card was free I think.

Yes just checked it’s £5 for additional card. I was given their Visa card for free because they were trailing it and you get 1 card free when you get Revolut account. Physical card has delivery charge. 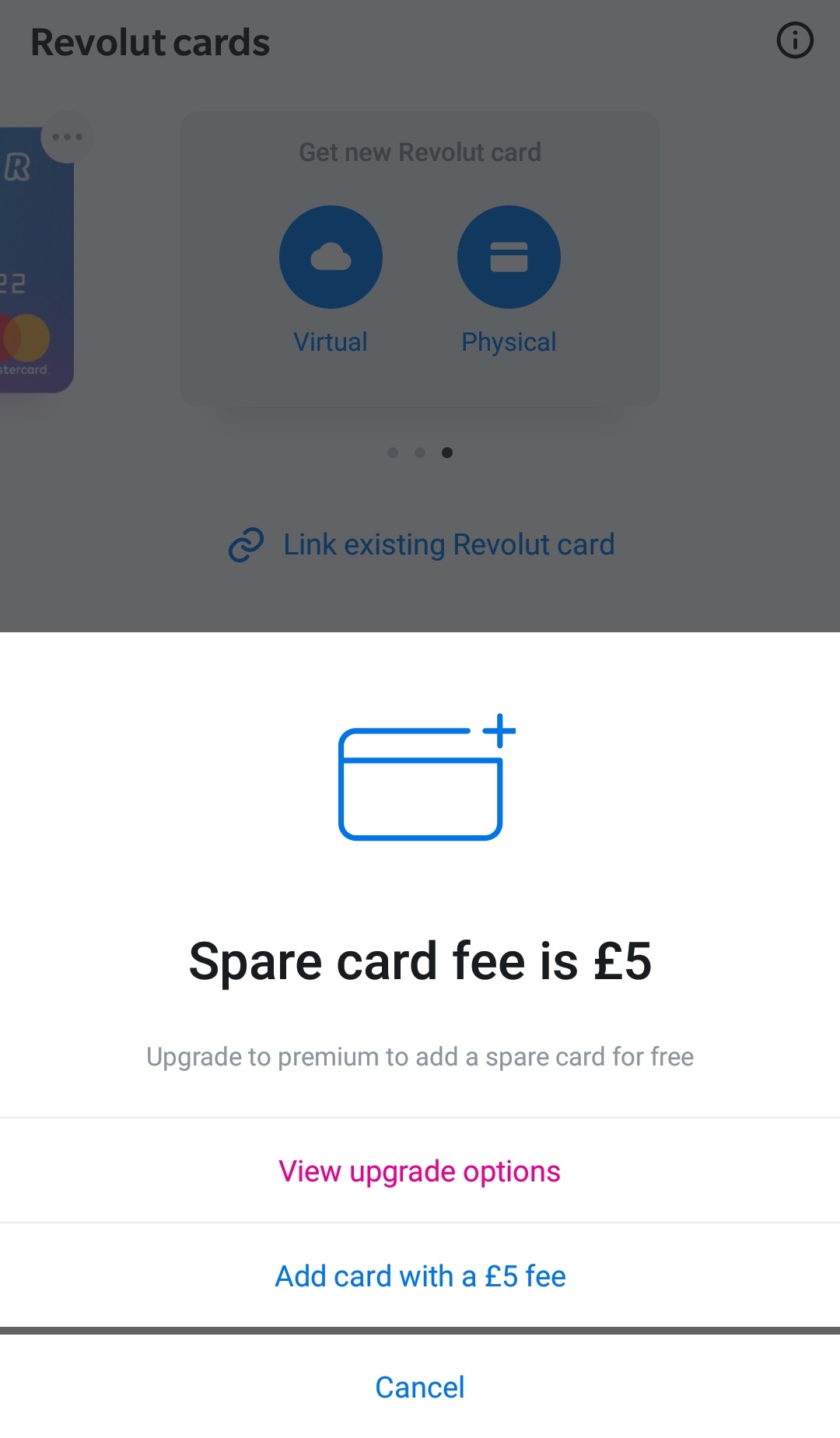