A colleague of mine mentioned he’d just been to a Bureau de Change to buy 800zł (Polish Złoty) and I immediately thought I should probably recommend some fintech to him.

I get the impression he’s not up for another bank account, but think he’d respond better to a specific currency card, so either TransferWise Borderless or Revolut. I hold both cards but haven’t had much opportunity to text both against the other in the field.

My immediate thought was to recommend TransferWise over Revolut, as I have the impression that, although here are more small fees attached, the customer support is better, and I personally would use that card. But am I making the right recommendation? He was immediately impressed with the app which proved I could buy PLN cheaper than he just had.

I actually think they’re slightly different products, just on the debit card side of things; Visa vs Mastercard, fees or none, Apple Pay etc. and that’s before all the bells and whistles Revolut adds, or bank account numbers they both offer.

Thinking about how these cards would function for someone not so into the fintech scene, which would you recommend to a traveller, and why?

TL;DR – taking all things into account, would you recommend TransferWise Borderless or Revolut for a traveller?

Having said that, I’d recommend a Monzo account as I’ve found no advantage to Transferwise over Monzo for the occasional traveller.

Transferwise Borderless, in my opinion, is more suited to those who are paid in one currency, and want to spend in another.

Thanks for the reply.

I’d actually recommend Starling over Monzo, as that’s cheaper still (no £200 limit) but I deliberately steered clear of current accounts – I think his reaction would be “I don’t need another current account” and I get the impression he’s rather socialised into ‘purchasing’ currency before a trip, so having actual currency within an app would suit him better.

I found that Transferwise Borderless worked just as well as Monzo prepaid did.

I use both and I’ve had the transferwise debit card since the beta. I’d say I like transferwise better due to the incredibly good costumer support I’ve had from them, however revolut is just better in everything else.

Transferwise has a lot of small fees for everything and the app is terribly designed and confusing. The borderless account was clearly bolted on the existing transferwise app. Additionally with transferwise you cannot control much of the card behaviour besides setting limits by type of transaction (ATM/internet/etc), no security features.

So while I have absolutely no love for Revolut, for someone who’s not going to use it everyday and just for travel I’d reccomend revolut. Fairly good intuitive enough app with a lot of functionality, especially compared to transferwise and no fees besides the weekend fx fee

I haven’t used either Transferwise or Revolut apps beyond briefly playing around with them and making a few test transactions.

But my initial impression is also that the Revolut app is more user friendly than the Transferwise app.

Thanks, both very helpful responses.

TransferWise, like Revolut allows toggling of all card functions (something that I want from Monzo)

All the “security” features revolut has, transferwise doesn’t 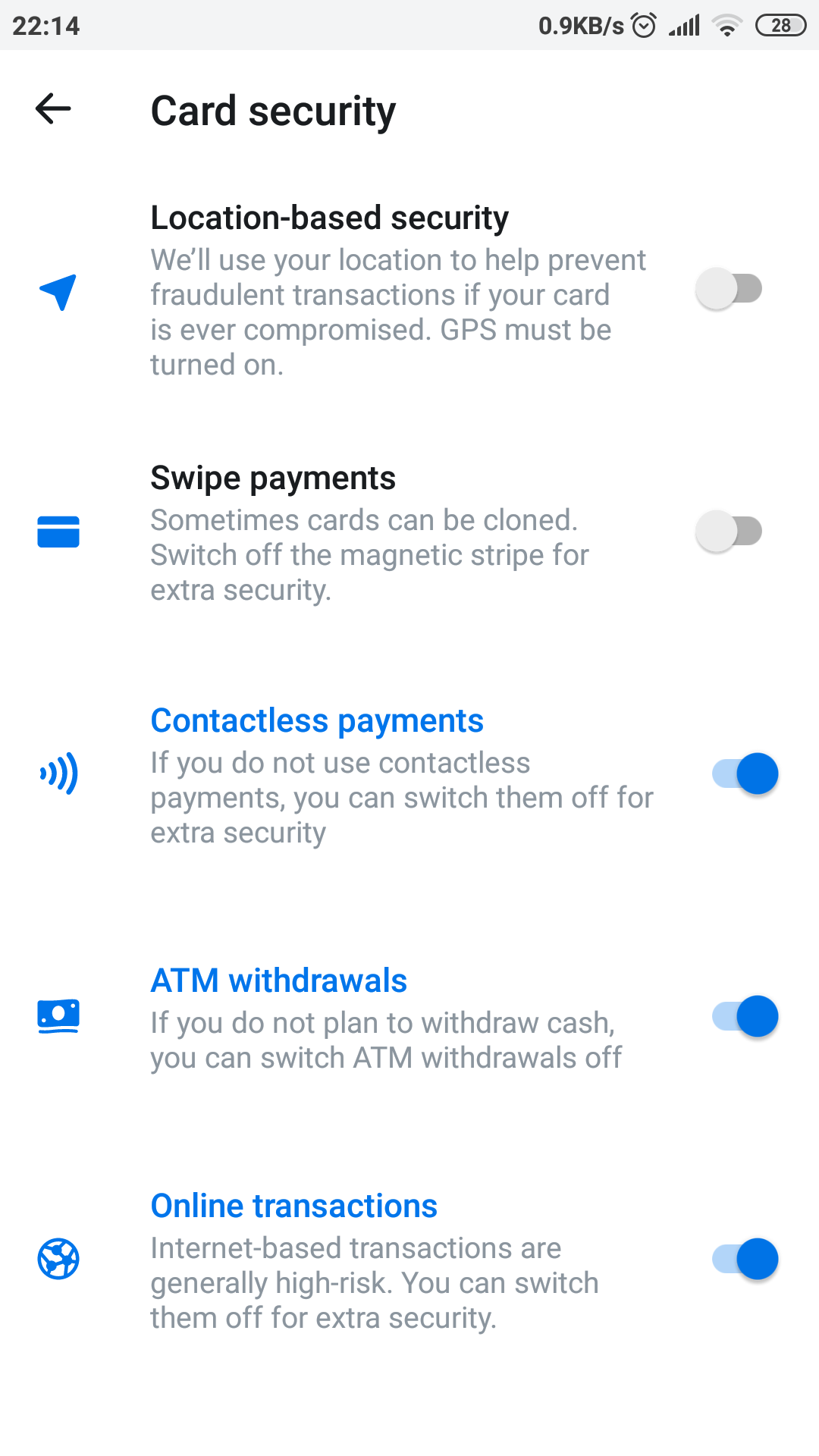 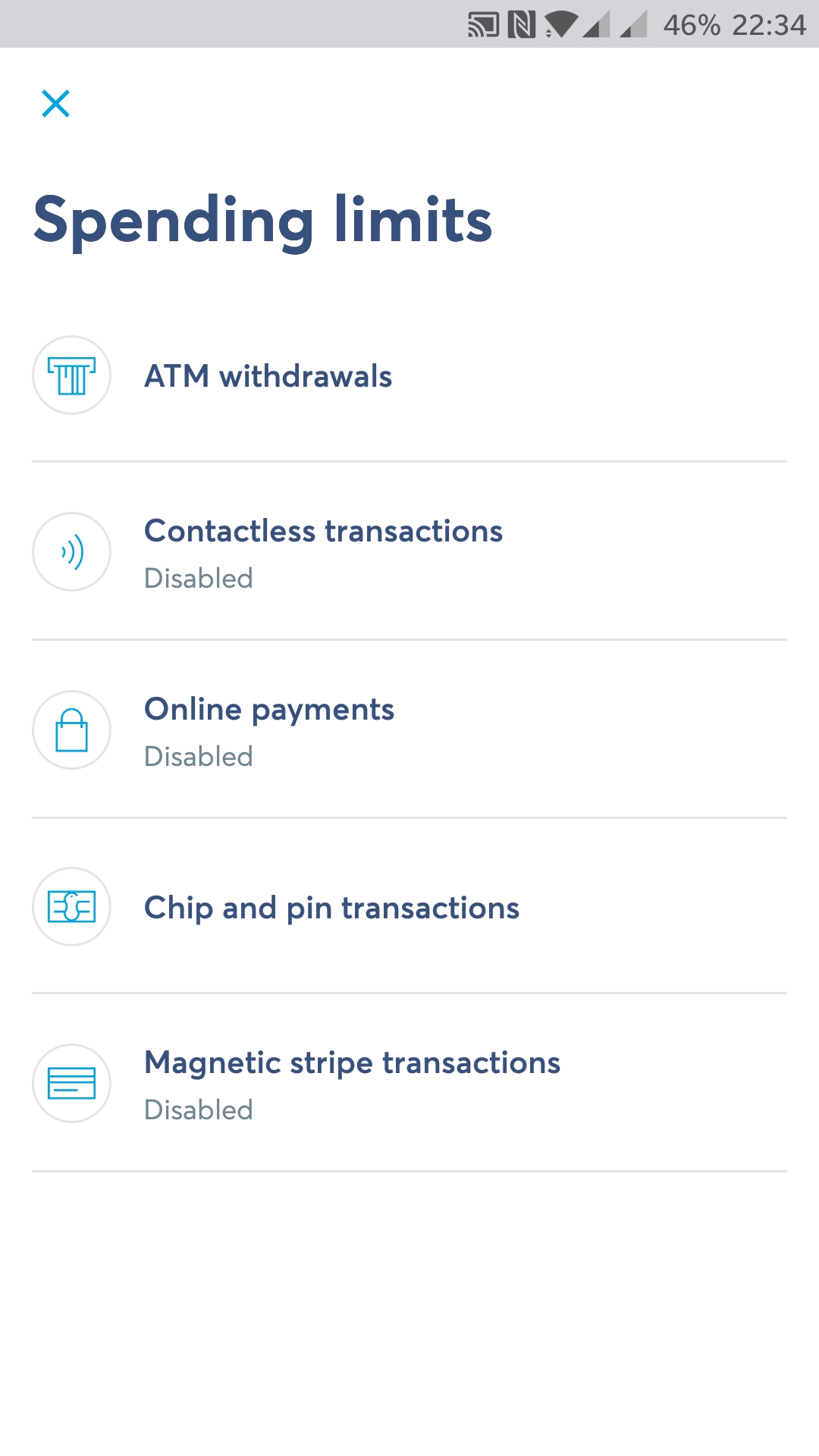 TransferWise toggles. Perhaps you should update your app

Hadn’t yet seen that. That menu is hidden under the “spending limits” button which has been there all along but before only used to let you see the limits, not enable/disable stuff or even adjust the limits.

It seems like an example of the bolted on, non intuitive design I mentioned

By the way, you can avoid the weekend fx fee loading funds in your preferred currency with a Mastercard with no fx fees. Then you get the Mastercard rate, which is slightly worse than the weekday rate at Revolut, but a lot better than the weekend rate.