I purposely wanted to change my number on each occasion. I didn’t want exes, marketing organisations, or former work colleagues contacting me.

I know I could block others’ numbers, but others could just as easily change their phone numbers, rendering my blocks useless.

Can you not just use Monzo.me to request exact amounts?

I’ve no idea how Monzo.me works.

I never had the prepaid Credit Card. I’ve been a Monzo current account user for less than a fortnight.

I can’t see any option in the app to create a Monzo.me unique username. I thought it might be under “SHARE ACCOUNT DETAILS” in the settings, but it isn’t.

In any case, most of my family are of an older generation and very technophobic. My parents have never paid online for any goods or services, ever. They’ll happily give their card details over the phone when booking holidays, but they’d never enter those details online. They have no desire whatsoever to use any form of online banking.

I totally get that. I was just replying to your post of your sister topping up your account with her card.

On iOS it’s under payments and at the top it says request. If you click on that you can see your Monzo.me link which you can use to top up your account with any specific amount from any debit card.

I’m on Android. I can’t see any option like that. 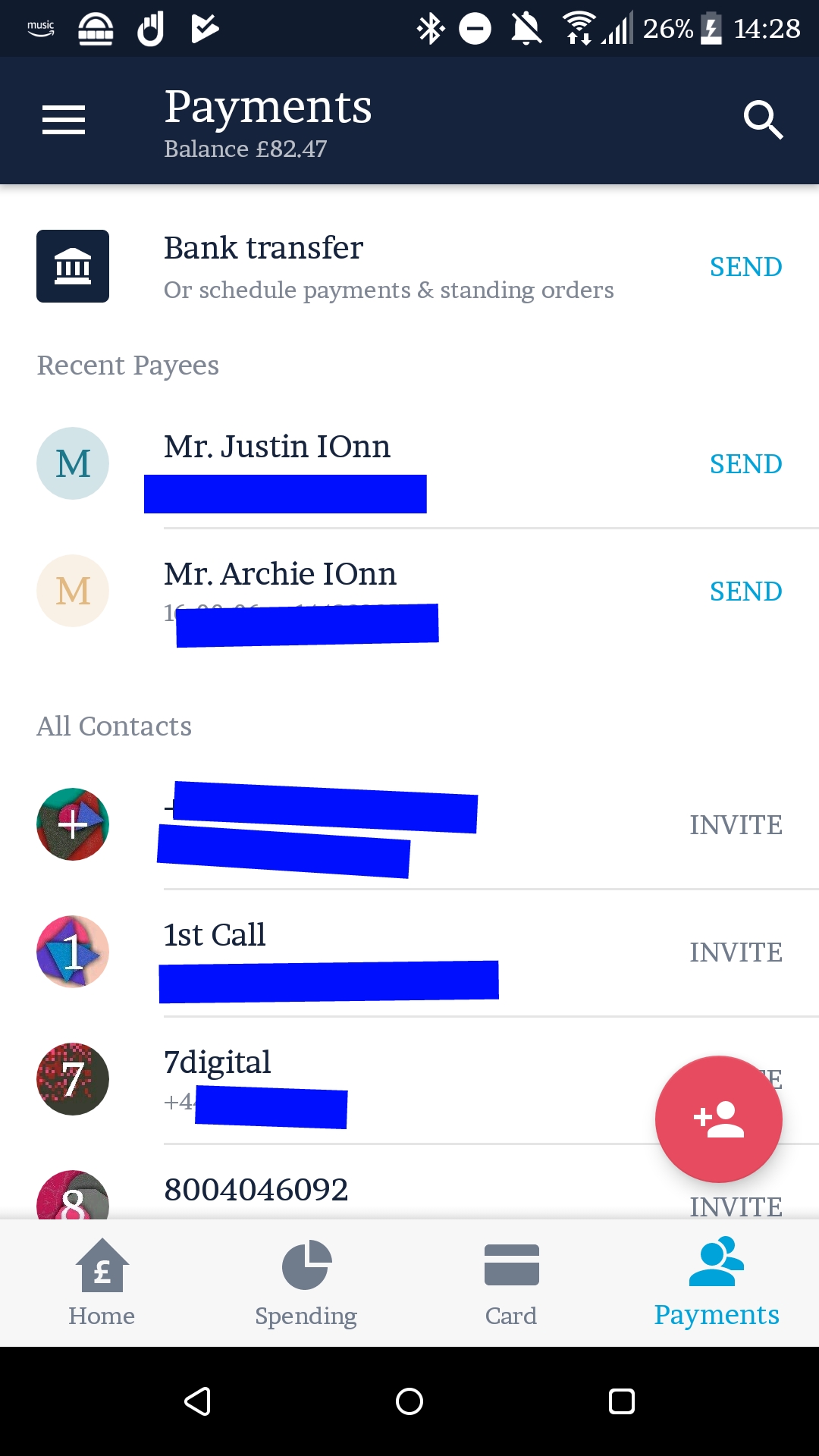 I’m on Android. I can’t see any option like that

Go to the “hamburger menu”, settings and scroll down to the “turn on payments with friends” toggle

Select that and go back to the payments screen, there should be a additional tab called “request” and in there a Monzo.me link

I’d already turned on that option a few days ago, to see what would happen. 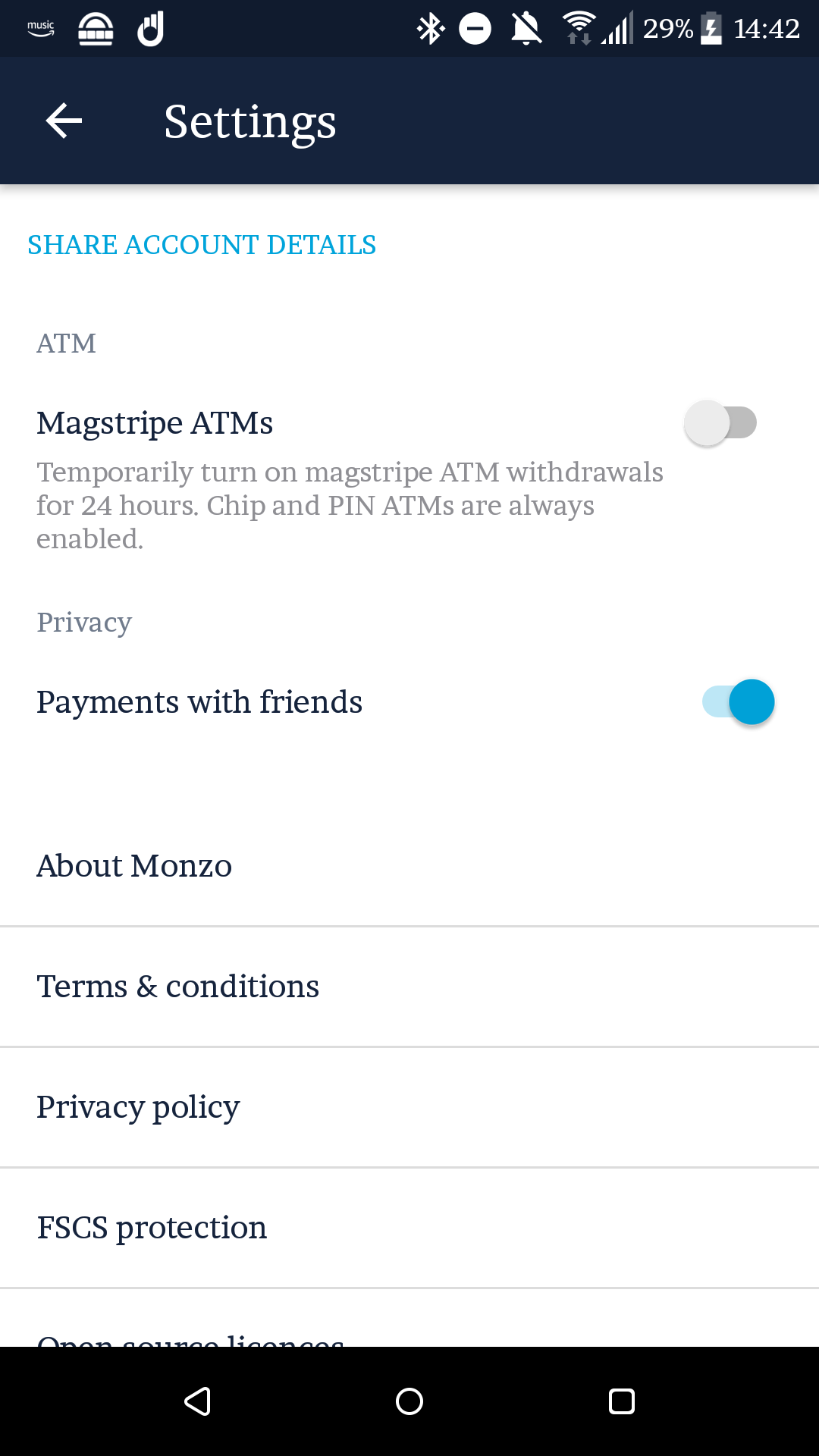 Okay, you need to make sure you have the latest version of the app

I don’t know if the version, with pots, that I have is the beta version or not. If it is, you can enrol in the beta program in the Google Play Store.

I have the pots.

There’s still no “Monzo.me” option in the payments menu, unless I’m being completely dense.

Anyway. I need to get some housework done now.

Should be in the “Request” tab at the top.

If @justinionn never had a pre paid card, I don’t think Monzo.me is ready for ‘brand new’ current account owners. Correct me if I’m wrong though?

That would explain why I can’t see the option.

Oooh, I didn’t know new customers were getting onboarded

It’s a hassle for them to re-call and re-send to my correct current mobile number.

I don’t understand why your friends seem unable to use your correct number. Presumably they know how to call and text you correctly? Why can’t they use that same number?

I don’t know. My sister is with the RBS. I don’t know how their online banking stores previous payees.

It’s not a huge concern. She’ll maybe send me cash once a year to split bills. Though, the last time she did so, she sent funds via PAYM to my old mobile phone number.

Any chance of this being added to the roadmap? It may well die a death with Apple Pay and Monzo.me but - for now at least - it’s still pretty handy to have paym support

I’ve added PayM to the Roadmap under “Long Term” based on conversations I’ve had with our Payments team.

There is a chance that it belongs in Medium Term, but realistically it’ll be a few more months until we can say that for definite. There’s a couple of higher priority projects being worked on by the payments team right now (including cheque imaging) and once those are completed, we can then look into committing to a timeline for PayM.

PAYM really is the missed opportunity of the last few banking years… in fact too many.

What an amazing service, which in similar form has changed the way people transfer money in other countries like Sweden.

build against it, it would be great for us, however it’s one less leverage point to push others to get

… however it would probably double the users of PAYM

Are you saying you have updated payM with your new number straight away? If so I thought payM attempts to the old number would recognise it is no longer registered and not allow the sending of the payment?