I currently live on a island that has no mobile signal. My U.K. phone number only works when there is internet connectivity and the only internet connectivity is in my accommodation through Wi-Fi. This causes issues when authorising online transactions by text. I’m sure I’m not the only one who’s having this issue as when on holiday people may not be using their usual SIM cards. Could perhaps the ability to receive authorisation codes through WhatsApp be added as an option?

Can’t you authorise the transaction through the Monzo app? That’s the default for me, and would work when you have WiFi (which is also needed for WhatsApp).

For online purchases it texts a verification code now. I think I read somewhere it’s becoming a standard for all banks next year.

@parry.tsj think you may have misunderstood @jzw95 - most places have 3d secure authentication, which would challenge you with some info to authorise the payment.

When Monzo got around to using 3D Secure they had a push notification that prompted you to open the app and approve or deny the request.

So in your situation you should be able to be connected to wifi, purchase what you want to purchase, a push notification should prompt you to approve or deny via the Monzo app, you approve, everything is good

Hopefully I have understood your issue and provided value 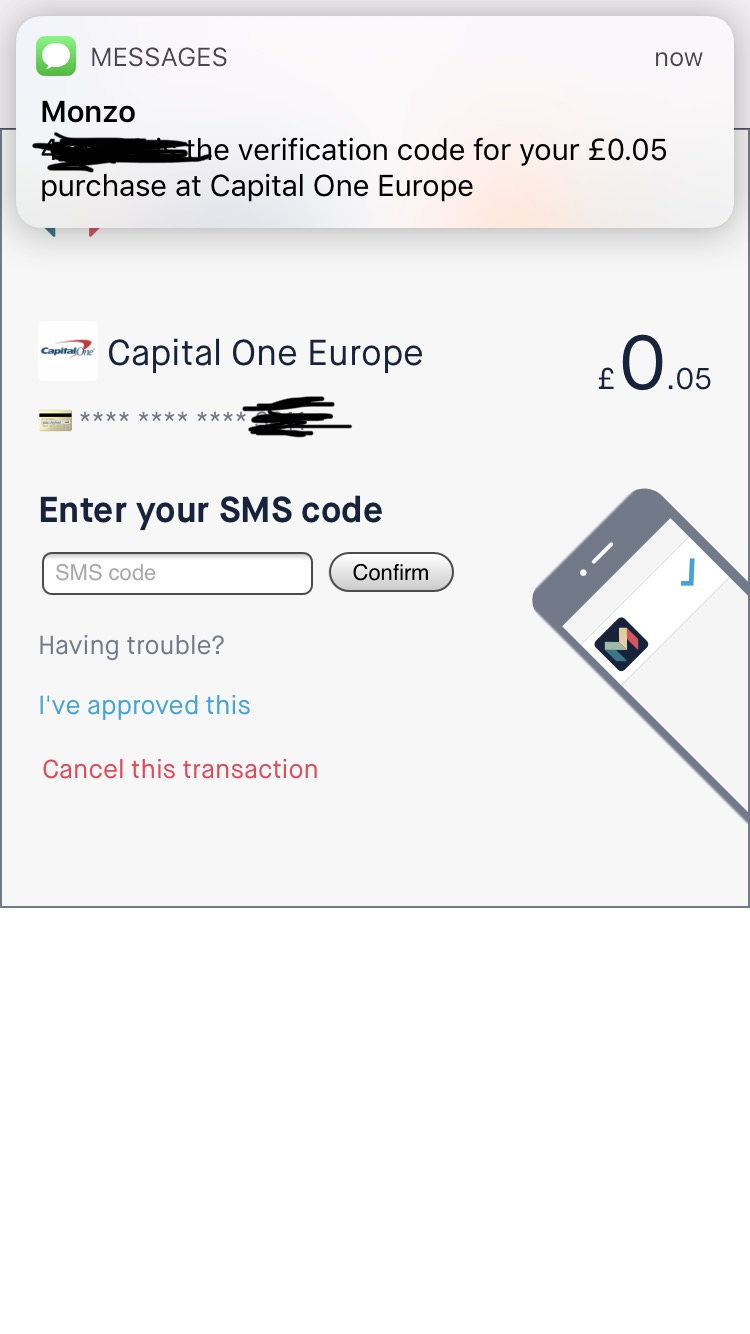 I’m straight to this, no push notification offered or when opening the app?

There are some cases where Monzo forces it to SMS rather than notification bacause of annoyances with certain apps.

With Barclaycard’s app, for example, you’d set up the transaction and receive the auth notification from Monzo - then you’d switch to the Monzo app to authenticate, but the Barclaycard app would then bin the transaction because you left the app.

I wonder if maybe CapitalOne is another of these.

Wouldn’t you have the exact same problem with WhatsApp? It still needs a an active internet connection to function… which if you have it you’d get your original number thanks to Wi-Fi calling/IMS anyway.

I’m describing this badly. Due to the lack of mobile signal I can’t receive text authentication and have a different SIM in. However due to saved U.K. number in my phone can receive via a WhatsApp account, iMessage etc.

I’m assuming it is the forced sms due to apps I guess then.

I’m assuming it is the forced sms due to apps I guess then.

This is a problem caused by other apps, not by monzo.

However, I agree that monzo could handle it more gracefully - though it (I think) only applies in the case that both:

Which would probably mean it is only affecting a small amount of users.

That doesn’t mean it isn’t a valid problem though!

A WhatsApp integration would be nice,

Although why not just send the code as a push notification from the monzo app? It would save money on the SMS costs and would help people without signal and people who are roaming and have a different SIM in then.

Monzo app would work and sounds like it’s supposed to. Just a shame it doesn’t always work. What’sApp option perhaps might be a workaround that sorts the app switching issue though!

I believe SMS is on its way out and it’s just a stop gap solution anyway. I think the new regulations require proper authentication (with PIN or fingerprint) so just texting a code doesn’t cut it.

I meant a code would be visible in the notification to
be manually entered in apps that don’t let you leave mid transaction.