The ‘Pay from’ option in the edit menu is a button… so hopefully something exciting coming soon?

And it is listed as a card option so it suggests some future functionality here is inevitable!

However, it has been there since plus launched though, so I wouldn’t personally read too much into like it’s a new thing they’ve just added, because it’s not.

New as a button though, I believe?

It’d be excellent to see in the transaction view which card has been used.

I’d like to be able to see whether I’ve used Google Pay (and which underlying card), my physical card or a virtual card.

I’d much rather have a note at the bottom of the transaction view, and be able to search by it, than the ornamental graphic on the merchant logo.

Does anything happen when you try to press it?

Maybe they updated it, but I don’t have plus anymore so can’t check! It did look like an area you could tap to change when it first launched though.

ETA: screenshot here of what it used to look like at launch.

Monzo Plus: Virtual Cards Monzo Plus

And here’s how it looks on my brother’s app now: 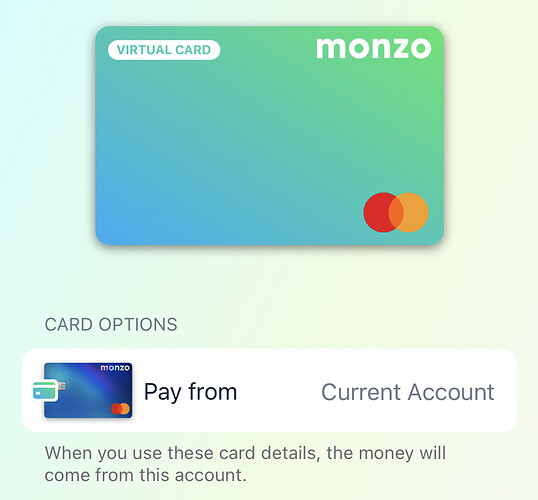 So they have made some tweaks! Tweaks that very much do suggest to me that you’ll be able change the source in a future update! Can’t wait!

I’d much rather have a note at the bottom of the transaction view, and be able to search by it, than the ornamental graphic on the merchant logo.

This would be a wonderful improvement too. I did like the graphic in the feed too though! Can’t put my finger exactly on why I liked the virtual card graphic but could never stand the round up one nor the thank you emojis.

Does anything happen when you try to press it?

It highlights itself in a light grey, as if pressed.

With this and all the other hints, feels p certain pay from pot is coming at some point

Ooo exciting! As soon as this is becomes a thing I’ll be signing back up immediately. Keep delivering, Monzo!

I’m probably overthinking, and don’t want to get anyone’s hopes up, but I think once the new pots views have been rolled out it might be time for pay from pots.

That’d give a nice annoucable package of categories and Summary for connected accounts, time expiring virtual cards, virtual cards from pots, pot transaction history… The icing on the cake would be to connect virtual cards to Google/Apple Pay - but we can always use Curve as a get-around for the time being.

Rough estimate of beginning of June for all that?

but I think once the new pots views have been rolled out it might be time for pay from pots.

I’d been thinking the exact same thing. Would certainly tie together, and I feel the hints around pot feeds re ‘getting ready for extra features’ could only have meant pay from pot too tbh.

Bonus question: how would you describe a virtual card to your friends?

No one answered my bonus question…

I tried to earlier but what you have written in the app is spot on in my opinion.

The only bit I suppose I could add is that if you need to replace your main card you don’t need to update all of your online accounts if you use virtual cards.

I would describe it as:

“A card without the actual physical card part of it.”

It’s pretty hard to describe, without trying to use the word “temporary” (which they aren’t necessarily). I think the key comparison is it’s 100% a normal card, just without the physical part of it.

My friend put it so aptly recently; a condom for your debit card.

Probably not appropriate for marketing, which I gather is what they’re looking for here.

Not sure how I would describe them, but there current purpose is definitely one of protecting my physical card. But that could completely change once you can pay from a pot. That would transform them into something completely different.

I tend to describe it as a card that you can use if you’re unsure about the legitimacy of a company. Maybe for example if you’re buying from a site for the very first time or maybe even signing up for a subscription, that way you don’t have to worry about that company having your ‘real’ card details.

The only bit I suppose I could add is that if you need to replace your main card you don’t need to update all of your online accounts if you use virtual cards.

Yeah I think this is very handy and would always say this as part of any explanation.

Like, rightly or wrongly, it seems more likely something’s gonna happen to my physical card, so I see the virtual as saving me hassle in that instance as opposed to it protecting my main card from fraud.

If I buy something from dodgywebsite.biz today, use a virtual card and set the expiry to today, will that cause any problems with the pending/final approval of the transaction? As it wouldn’t all be done and dusted today.

Card details without the physical card, typically used for online purchases and subscriptions.

Depending on how they want to use them they may want to use a virtual card to help with budgeting/separation of spending, or to protect their physical card details, or both.

Card details without the physical card, typically used for online purchases and subscriptions.

With a mention of how it’s linked to your main account. If your virtual card details get defrauded (

) you don’t have to replace your physical card and vice versa.

If I buy something from dodgywebsite.biz