I’m in the same boat. Too bad this thread did not get much traction. We might not get a concrete reply from a monzonaut before the press writes an investigative piece on how our financial privacy is non existent within the new wave of banking solutions and fintech…

Perhaps you should tag an actual monzo person if you want a reply from monzo. Just saying.

Perhaps you should tag an actual monzo person if you want a reply from monzo. Just saying.

Without a published list of specialities and willingness, bit hard to guess who to tag in. Bit harsh on Simon and Rika to pretty much always be the go tos for such things

I am fairly confident it is nothing too untoward, but given the sensitivities (some understandable) around FB it would be interesting to find out the proper reasons

As mentioned, if you haven’t had a reply from a staff member then please feel free to tag and we’ll take a look as soon as possible.

So, Facebook Analytics are solely for marketing/install tracking purposes. We run a lot of different ads on Facebook, and the install rate from the different ads is one of the main metrics. Same story with Google Ads. As mentioned we also have some Facebook code (Facebook Login) for pulling in a user photo for your profile, which is a user-driven and optional choice.

Crashlytics is for crash reporting, they are owned by Google.

Opening it to the floor, and to yourself, what is install tracking and install rate in nice simple language for muggins here to comprehend?

Is it a case of trying to avoid advertising Monzo to me on Facebook?

My own employer sent me Facebook adverts about employment opportunities over the weekend!

what is install tracking and install rate in nice simple language

So installer tracking (in this case, related to Facebook and Google) is essentially a small bit of code within our app that links to the adverts we are running on those platforms at any given time.

So, this means that we’ll know if you’ve installed our app as a direct result of seeing one of our adverts, and thus, we can gauge the effectiveness of the advert.

So if I keep seeing the advert, but never click on it you “know” that my token is not very good value?

I don’t think I have ever seen a Monzo advert online. Did see one, literally one. at South Kensington tube station after going to the V&A though so I’m covered

@simonb
Thanks for replying!

If this is the case, why is the app regularly connecting to Facebook? The install attribution should be at install time only.

I don’t use Facebook, so it’s not pulling my profile picture in.

Surely Crashlytics should be opt in to be GDPR compliant? The app hasn’t crashed once, so what is it sending?

Using the app for 2 minutes browsing transaction history, it connected to

It’s also connecting to Facebook when I’m looking at settings - this level of traffic is excessive for just install tracking and profile pictures.

Hi @simonb any response to the above?

Facebook uses lots of signals to identify users. Including IP address and Advertising IDs. These let Facebook correlate between apps and identify users. These are all sent with the Facebook SDK.

I don’t remember signing a EULA that said this would happen, pretty sure that’s not legal (GDPR).

This data is shared with FB irrespective of if you’re a FB user.

You mean other then the comments already made? Not sure why they’d comment again to be honest.

No to my last comment. The amount of connections seems excessive to the stated purpose, what exactly is the Monzo app sending

Ah. Missed that in my scanning back. Sorry!

Monzo replied to me in a DM, with this: 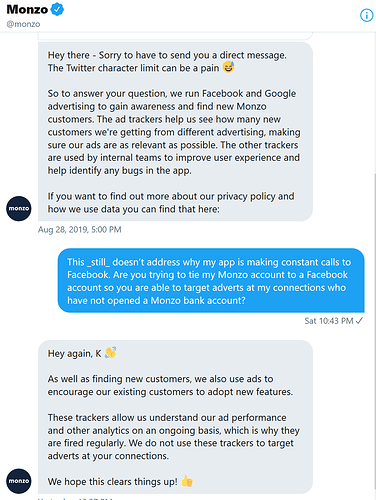 Not sure why they refused to tell me this in public though. Also it seems like they use the Facebook graph API for a lot more than they originally tried to say.

So does that last reply essentially mean they will (or at least, can) target Monzo users within Monzo to get Monzo plus? They are not going to run paid adverts on Facebook for no return.

So does that last reply essentially mean they will (or at least, can) target Monzo users within Monzo to get Monzo plus?

I think they’re already doing that if you haven’t opted-out of the in-app advertising. Not sure how they fit Facebook into this though, it’s not needed for what you described

So I’ve taken a look at the traffic that the app is sending.

Make of it what you will but I believe this data can be used to fingerprint users by Facebook, and they probably know what device you have, your coarse location and that you are a Monzo customer.

The requests to login to Facebook are completely separate to the above, and I still think that sending this data regularly is excessive for install tracking.

Well it doesn’t look like Monzo will be telling us the truth.

Based on what? (As in why disbelieve what’s already been said?)