There’s been talk over on the Stocks & Shares Pot thread about seeing stocks and shares portfolios in Monzo.

Freetrade was mentioned, and (disclaimer: as an investor in both companies) I’ve been thinking about how an integration with Freetrade might work.

What would it look like in the Monzo app?

How would they make money?

(Note: all these figures are guesses and based on no real research)

This would lead to an ongoing, mutually beneficial commercial relationship, I think / hope.

What does everyone think? Is this an interesting model for folks like Monzo and Freetrade to look at?

Sounds like a good idea. I have asked freetrade in the past, any plans to work together with monzo or integrating their app with monzo. So far, they mentioned its not on their pipeline yet. It would be really brilliant if they can integrate

There are lots of interesting ideas here, which in the long term I agree would be great for these two companies to explore. I think any first integration needs to be a lot simpler though:

Each partner could add a small percentage fee (I’d go with 10 basis points each) so fees are unobtrusive - I think for this different product a percentage fee makes sense as it doesn’t penalise small deposits. I’d make min deposit £100 or something really low, with no top limit - this could potentially make monzo a lot of money and give them a really compelling advantage compared to other banks.

Messaging would have to be right of course, based around long term saving, telling people it is possible for their fund to go down as well as up in the short term.

So this is vastly simplify saving using the stock market, with probably 5 x the returns of the Cash ISAs - I honestly feel most people don’t appreciate how bad the returns on cash are at present, if you’re saving for the long term you are losing money with almost any Cash ISA.

Then later a great thing for freetrade would be your other suggestion of:

Any more complex integrations would have to wait till they at least have the above in place, they are certainly possible but better to start with the easiest and most useful features and get them done. Fingers crossed the two companies do decide to work together.

I just came on here to make the same suggestion, although you articulated it much better than I could!

As a user of both Monzo and Freetrade I think they are both made for each other and I would love some integrations. Even if it was just as simple as seeing my current freetrade balance in my monzo app, in much the same way I can see my Barclaycard balance.

I’ve just read this article about Freetrade that has an interesting nugget:

It’s also looking at an ‘auto-pilot’ feature which would automatically funnel money into different accounts for you and integrate with customers’ banks so they can see their investments in their banking app. “We want people to go to the Freetrade app, but if you’re looking at your savings app it would be nice to see how much you’ve invested,” says Fuller.

Emphasis mine. I’m assuming they’re working on an open API, but who knows? 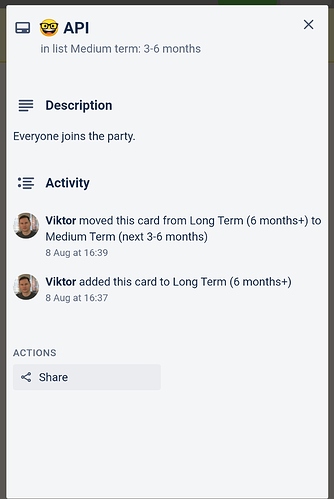 This would be amazing, great idea @Peter_G!

I love Freetrade and would love to see a similar offering through Monzo whether by way of a JV arrangement with Freetrade or building out it’s own platform like Revolut. I think this is a missed opportunity as Monzo already has 4+m users vs Freetrade’s 150k. I believe Feetrade also licences use of its platform. Would love to hear more from Monzo on this. This would be a great product to tie in with the premium account.