[Removed - I can see this was misunderstood as an attack on equality. This is not the case at all, and I offer my apologies for any offence caused.]

What do people think of equality but you don’t want to start a flame war?

There is no negative side of equality. People should have the same opportunities

Have you read these two threads on diversity and inclusion? There’s some discussion on both sides about it.

An Update on Diversity and Inclusion at Monzo News & Updates

Building a diverse team where everyone feels included is important to us at Monzo. It’s key to our success as a company, and it’s the right thing to do. Here’s our annual update on what we’re doing to improve, and our progress so far. Please let us know thoughts, comments, suggestions or questions here

I just think that there are different kinds of privilege eg gender, race, class. A white cis male from a poor background might have certain kinds of privileges but not others, and resent being told he is privileged, when we are comparing apples and oranges.

However, I’m wary of statements saying “political correctness gone mad” or “witch hunt” in recent conversations in the media because it makes it out to seem like there is an attack on men, when it’s about raising women up not putting men down.

Also, equality doesn’t = giving the exact same things but rather raising them up to give them a more equal footing. That’s why we have bursaries and subsidies for underprivileged children, initiatives to introduce more women in certain industries, etc.

However, it seems there is a ‘sect’ that views general society (mostly white cis males) as advantaged, and as such efforts should be made to rectify this. I don’t include myself in that group for a number of personal reasons, but I think we need to guard against political correctness gone mad.

You have to elaborate on this.

Are you saying that white men with ‘gender appropriate’ roles are somehow being undermined by political correctness and there’s a need to defend against that?

If that’s what you mean then I am probably in that ‘sect’ which you don’t like because I don’t believe in old gender stereo types and I don’t think there’s a sect it’s just common sense.

I think we need to guard against political correctness gone mad.

The same thing was probably thought at certain points in history as ideas that we now view as progressive were starting to get raised.

For example, the suffragettes, we now view them as heroes of their time, I imagine at the time plenty of people probably believed it was “political correctness gone mad”

In order to understand disadvantage you need to understand your own view point. As @evangelskies points out there are different levels of privilege based on a number of different things that make up the whole (of an individual person). Not everyone has the same privileges, but generally we might all have some.

Cis white men shouldn’t feel under attack (I am included in this, although I’m also gay so have been under attack at times) because again it’s not about disadvantaging us but instead about removing some of the barriers that history has built up for others.

There are some sections of society including parts of the media, that tell us to be scared; we should not listen to them. There is more that unites us than divides us and we should never forget that.

I’m glad that the first thing I did when I woke up this morning wasn’t to question whether equality is a good thing.

…such efforts should be made to rectify this

It seems you’re thinking of it as people disadvantaging you to make up for everyone else being disadvantaged rather than just trying to make sure other groups have the same opportunities as you.

I think we need to guard against political correctness gone mad

I think we need to guard against manbabies who think political correctness has gone mad.

Equity is a far better way of describing what most of what you might call “political correctness”. Equality is one thing (everyone has the same rules to follow, the same opportunities etc) however right now people do not start off from the same place, on a level playing field. Therefore we need to push up certain groups/things to allow them to actually take advantage of equality.

A great cartoon that demonstrates this: 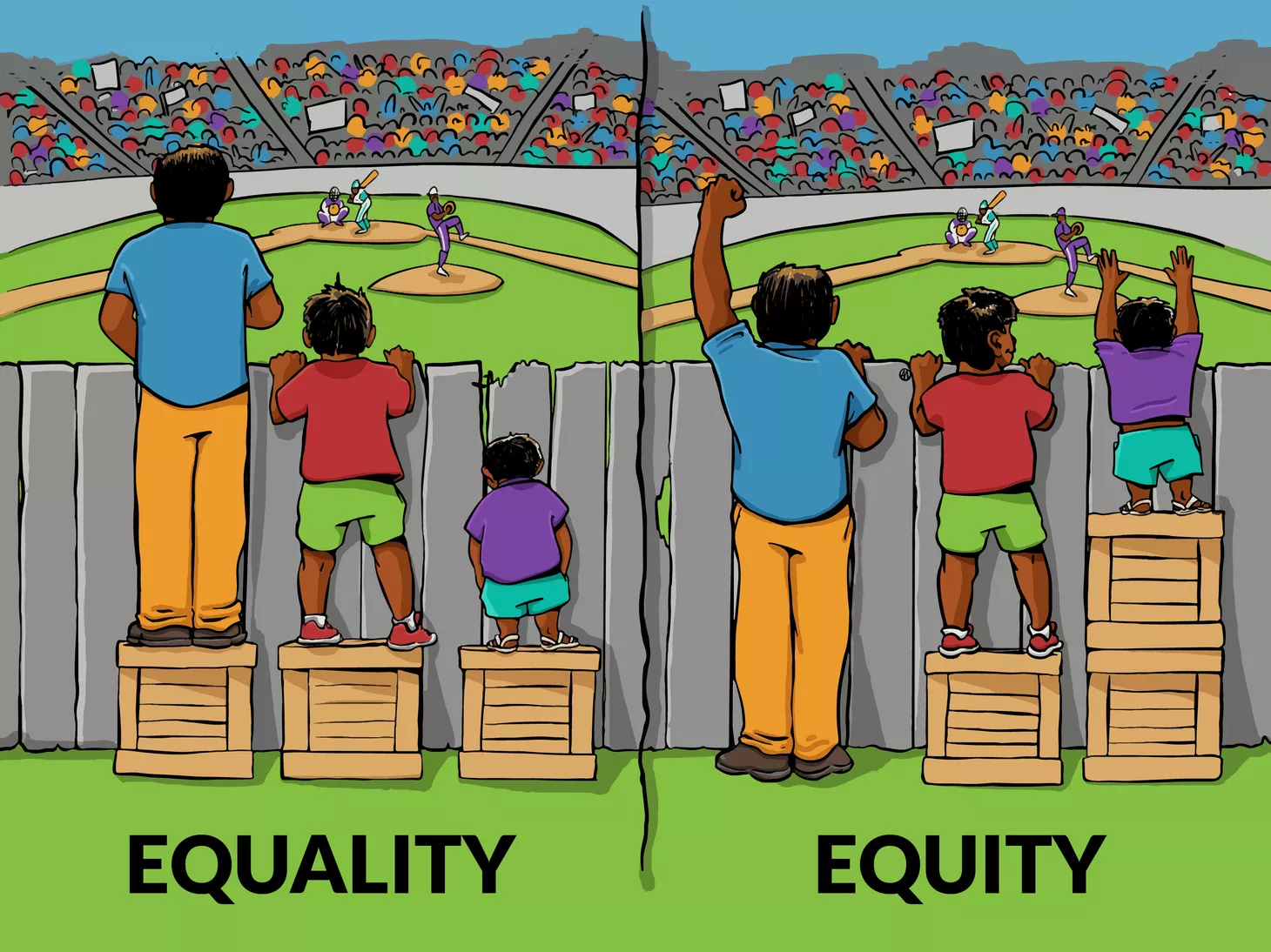 However, it seems there is a ‘sect’ that views general society (mostly white cis males)

Ummm, I’m not sure where you live, but general society is not mostly white cis males. For starters, there are more women than men in most parts of the world, including the UK. I think that starting from this assumption is where a lot of things go wrong.

I’m closing this thread now. I don’t think there’s much value in questioning the value of promoting equality. It’s something we support through both our community Code of Conduct and our company values in general.

There are plenty of places online for these discussions. But we’d rather not host this kind of conversation.