Am I missing it, or is there no actual link on MSE to the supplier? (I know you’ve put the link in your post)

You’re right, there isn’t a link. They want you go go through their ‘cheap energy club’ instead.

I’ve been with octopus for about 6 months, and I have never been happier with any other energy supplier. The customer service is second to none, the pricing is much cheaper than what I Wass paying with previous suppliers, and thee IFTTT integration with the Agile Octopus Tarif opens up some really cool doors (for example, I Have a lamp in the living room that turns green when energy drops below a certain price so is cheaper to use, and red when it is higher and more expensive, a nice little visualiser for when I can save a bit of money.

We are saving a lot on our energy using the below combination. Gas at its cheapest tariff. Electricity one of the cheapest. 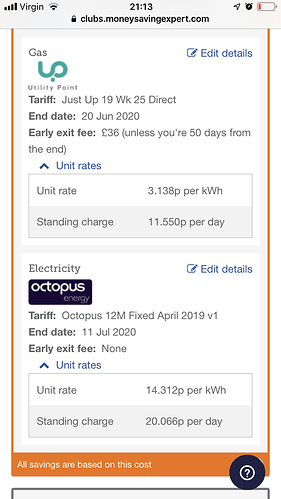 should be in the referrals topic

I’ve just signed up for them, will have to wait and see what they’re like.

That’s a good point Manender, sometimes it’s cheaper having separate suppliers for Gas and Electricity. Does mean you have two different suppliers to deal with for billing and energy issues etc though!

Yes I have two separate suppliers. But there haven’t been any issues as yet, fortunately.
Submitting the readings on time is the key. Secondly the suppliers need to have good reviews as well.

In June I received an email from Octopus about SMETS2 Smart Meters. I filled form about my interest. And… still no reply from them.
Someone got new meters from Octopus ?

Just got our smart meter installed from octopus last week (2nd gen). Prob took a few months from requesting to being contacted to arrange a time.

The team they sent to install were amazing. Fixed a few issues as well as installing the smart meters. No charge for any of this! (I think it is funded via government so maybe not entirely free…)

Fascinating having a real time meter. We have tested most appliances to see how much electricity they use. Geeky but awesome.

The team they sent to install were amazing. Fixed a few issues as well as installing the smart meters. No charge for any of this! (I think it is funded via government so maybe not entirely free…)

It’s funded through our energy bills I believe, so we all pay.

Did you see they’ve pushed the deadline for the finishing the smart meter roll out back by 4 years! Obviously been some big problems.

Just completed my switch to Green. Fairly painless process so far and the app seems pretty decent, although some parts won’t work until they have more than my opening meter reading.

I’m currently with Green on their variable Oak tarrif. Customer Service is really good. Although I might be switching to Eon as their latest fixed tariff is only a few quid more expensive per year and I can get some cashback.

Although I might be switching to Eon as their latest fixed tariff is only a few quid more expensive per year and I can get some cashback.

I moved away from eon as the ease of use and customer service elsewhere were worth the extra few pounds.

Please god, don’t! You may be lucky and everything go to plan, or injure your head against a wall…

Are you against Octopus or Bulb?