There are a few apps in the app store now that let you pick between different app icons. I want all the hot coral in my app icon… please make it a reality!

That could be cool

I just want a hot coral background with the monzo logo. As simple as that. Or maybe even just hot coral with no logo. A few different icons to flip between would be nice. Can chop and change between a few.

I agree, was just looking in my ‘finance’ app folder on iOS and realised Monzo sure would stand out if the icon matched the card. Let’s make it happen!

This would be so dreamy! I read somewhere that most app icons are blue (for trustworthiness?

) but hot coral is just so us.

I just wanted to bump this to save a new thread as I’ve just joined Monzo and feel the same way too!

I feel the current iOS app icon isn’t very reflective of Monzo’s uniqueness - I’d love a hot coral icon or in a perfect world, the choice of 4-5 different icons within the app (as mentioned, like other companies do - which also suggests it could be implemented relatively easily?)

As it stands the app actually looks slightly smaller than my other apps as well (although I’m sure this is just some sort of visual trickery) - but it’s a shame to hideaway the Monzo app in a folder when I want it on the homescreen, at forefront of my phone/mind.

Really happy with everything else so far! Hope I’ve done this in the right way.

I liked the Original CA icon (the white one)

Ah, I just saw the White app icon on an old thread - I wonder what the reasoning was when they changed from that?

The Monzo icon has always been blue. When users were invited to try out the Current Account the app was released as a ‘beta’ app and as you could still use both apps they had different coloured icons.

Customisable app icons are coming soon, and you’ll have access to different ones depending on how long you’ve been part of the Monzo journey. Neat idea. There’s also a special gold icon for investors. 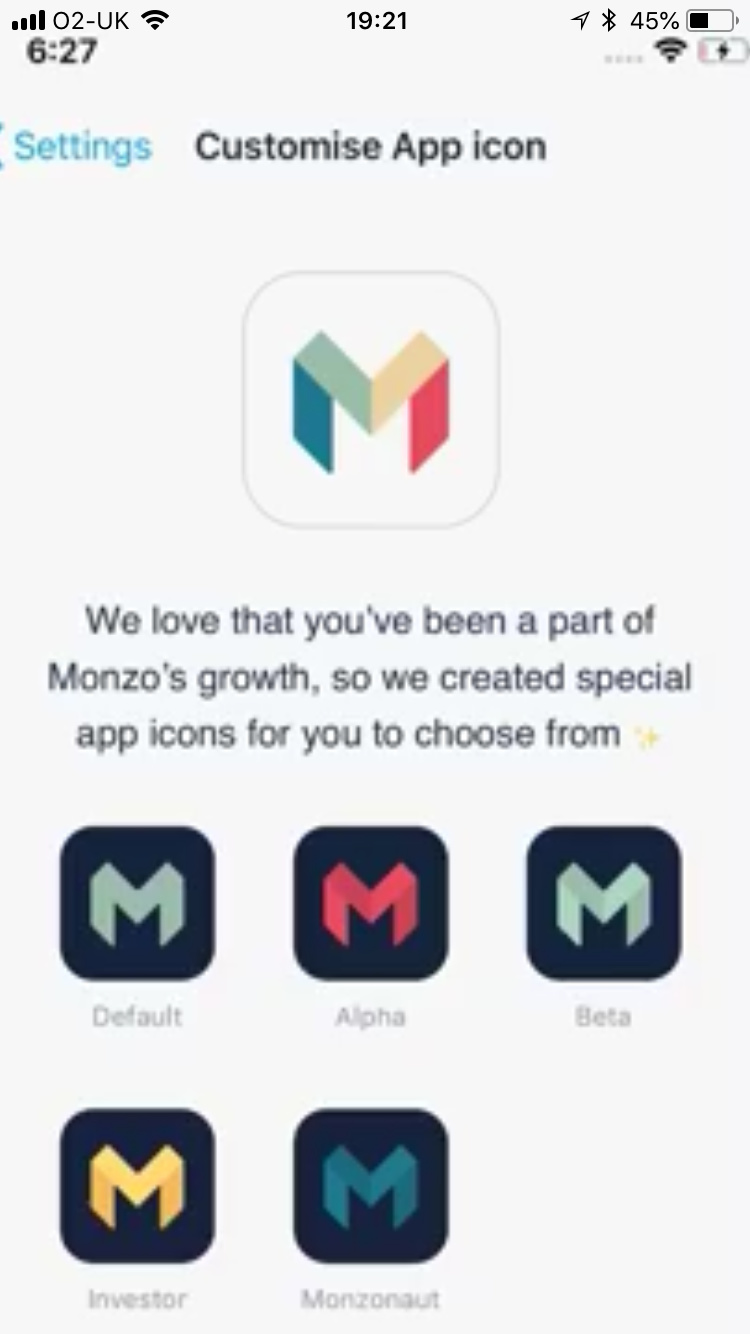 This is from a sneak peak from today’s Bulletin with the one and only @simonb and guest starring @jexyla.

That is pretty sweet!!

Coincidental I only bumped this yesterday

Not exactly what we wanted but not complaining - still an improvement/step in the right direction!

I don’t even know which app icon/s I would qualify for as a newbie!

Really disappointed with this, not sure that App icons should be restricted based on when you adopted. The Alpha colour with the hot coral is the nicest of them all on there.

Fine, no problem restricting based on whether you’re investor or not. But the cards don’t say Alpha/Beta anymore, so why restrict things based on it too?

I wonder what classifies you as a ‘Monzonaught’. Is this for staff members only or is it a well known term that I’m not familiar with?

I believe a Monzonaut is anyone that uses Monzo.

Oh good haha. I’m not too keen on the beta icon so looks like I’ll be going for the blue! Let’s hope the next investor round opens up soon

In my opinion a decent compromise would be 3-4 default ones for everyone to pick from (the current one, a hot coral tile etc), with more in addition for the veterans if they want to show-off

But this will hopefully all come in time, at least they’ve added the functionality for now!

I think it’s staff. From what I’ve seen anyway.

I think the investor/beta/alpha should be “modifiers” on the current logo – or maybe a picture of Chip holding the equivalent level.

Chip’s not thorughout the app enough!