It would be a great idea to allow for custom vendor logo uploads and nicknames. So essentially I can choose a photo from my library to use for specific vendors, and choose my own names for them so that they are more recognisable when going through my past transactions.

This could be implemented by simply tapping the logo on the overview screen, and uploading your own logo, and customising the name! A simple but very neat feature

I’m assuming you’re on android as on iOS you can tap “something wrong with transaction” and it will allow you to correct names.
On android just contact support and they can correct it.

But it is not him correcting a name just wanting to be able to give it his own title such as Corner Shop, Where Jim Works, The Red Building etc, however if it is called Tates Stores that may be how most other people know it and it should not be changed so they see Corner Shop too, particularly as they may think of Corner Shop aa being another corner shop they go to! The OP raises a separate issue to amending an incorrect name, one of being able to display a different name in your own app, i.e. a user specific change rather than a change forced on all customers who may go to that shop

Ah right i see. I thought that was the actual shop name.

This would actually be a great idea, I have a couple of payments that are named like this and would love to be able to change them to something more memorable. 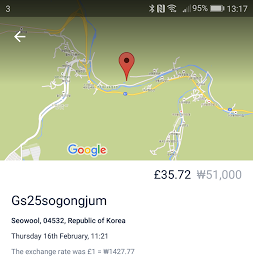 @MathewBloomerBrack Haha! That’s a prime example of what I am talking about.

Obviously what you’re seeing there’s not the merchant’s name so it would be good if you could let Monzo know about those (via the in-app chat for Android users, for now) so that they can fix it for other users too.

Obviously what you’re seeing there’s not the merchant’s name so it would be good if you could let Monzo know about those (via the in-app chat for Android users, for now) so that they can fix it for other users too.

A few of the places such as this had no visible names and definitely not one I could replicate on my Qwerty keyboard, but being able to change them to something like “Shop: Dorasan/Pyongyang” and change the location as it’s about 45 km south of where I actually was would be useful. I honestly can’t imagine many users will ever visit this particular shop so keeping the change tied to my account would make sense.

I honestly can’t imagine many users will ever visit this particular shop so keeping the change tied to my account would make sense.

Maybe not yet but you won’t just be sharing this with UK users, once Monzo’s international expansion gets fully underway.

That’s a fair point though, I hadn’t thought of that

Yep. So times like that it would be useful to add your own picture to the merchant. So at least you can try to remember what the place was

@anon44204028 That’s cool, I honestly prefer that to logos as it would let me see the place without having to tap on it and read the map

I hasten to add, I did not specifically request this, it was done by Monzo

True. As the Monzo app does not recognize I have Here Maps installed and just tells me Google Maps is missing I can see your viewpoint. However personally I prefer a logo/icon.

Perhaps a future iteration of the app could have an option of logo or Google Streets photo and a user select their preference.

True. Although I prefer seeing an image of the vendor, I suspect most people would like to stick to logos like yourself. The easiest way to please everyone would be to allow for customisation of the image and title as the first post describes