Indeed they do, but despite their success (>50% of the market etc) they are still running at a loss. Something needs to give.

I’m not sure that what the companies pay is relevant to this conversation particularly. It boils down to - are you happy as an investor to pay a fee of 1.5% for access to a stock that you’re interested in? As mentioned elsewhere, the fees for even conventional and simple products like ISAs mount up to 40% or more over a lifetime.

It’s no different from the fee you might pay your financial advisor for an investment product. It’s clearly not part of the investment and it’s not a failure of logic to state that it is separate.

It is indeed no different to the fee you pay your financial advisor, but it is part of your overall investment. If you hadn’t paid the fee you could have put that money into the product and made even more return.

A better comparison in the retail investment space is a DIY trading account like ii.co.uk who charge a flat fee for custody (just less than £100 per year) plus a flat transaction cost (£10). That provides access. The flat fee isn’t linked to the amount invested.

Charging a proportion of amount invested like CC are implementing is not comparable.

Do Crowdcube manage your investment? Freetrade for example manage their own shares and have their own share register, I know Monzo use the Crowdcube nominees but to my knowledge that is not the normal (not that I have noticed at least).

I thought Crowdcube just provides the pitch platform and did the transaction but then it was over to the company to manage share holding going forward?

Stocks
By not factoring in the transaction costs of investing in stocks, the ROI can become inflated. For example, let’s say you made a $200 gain on a stock investment, but there was a $20 transaction fee charged when you bought the stock, and again when you sold it, your initial ROI of $200 would not be accurate.

If you add the fee on top, you have invested £1015. You can’t just remove costs from the equation.

No. You’ve invested £1000 and paid a fee to do so of £15. And nobody is arguing that you don’t include that cost when working out your ROI.

Ok, so let’s work out the ROI in your two scenarios, assume we invest for 10 years at a compound growth of 10% to make the figures easy, and in both cases the capital required is £1015:

Pay the fee up front:

Pay the fee at the end:

In both cases you are giving up £39 of growth.

In my opinion it seems more aimed at user numbers rather than investment amount, I think they want users to invest more per/pitch which might be driven by the cost per/user per/year.

Crowdcube have increased their fee for entrepreneurs raising on their platform to 7% + VAT, and there’s a a completion fee, which is on average 0.75% -1.25% of all funds raised ( source ).

They need to find a way of making money but this might backfire.

If you’re making the point that 1.5% at the beginning is the same as 1.5% at the end then it doesn’t stand up to scrutiny.

But I don’t care about crowdcube - the effect on me is the same, I lose 39 quid.

I’d much rather pay the 1.5% at the end - assuming of course there is an exit. That way, at least Crowdcube would have skin in the game and an incentive to put forward promising companies.

To me, that fee structure is much closer to a win win.

Seedrs charge 7% of any exit, which I think is completely unfair, because it’s your risk, not theirs. Not sure if they deduct your initial investment before they do the calculation. Apparently Crowdcube are considering something similar…

Seedrs charge 7% of any exit, which I think is completely unfair, because it’s your risk, not theirs. Not sure if they deduct your initial investment before they do the calculation.

Seedrs charge the fee on only the profit but yeah it is excessive.

Indeed. Clearly they are supposed to provide their services at a loss.

Many people over the years have said Crowdcube’s business model doesn’t work and this attempt at a money grab from retail investors seems to vindicate their opinion.

Appears to me they’ve milked their cow as much as they can and now this is a desperate attempt to squeeze any possible revenue, whatever the ethical or reputational implications. Imho it will hurt them a lot when people choose not to use their platform at all. The bulk of the money flowing is from people using tax schemes like EIS to cut down their tax bill, and now Crowdcube are adding their own taxes.

I’ve invested a lot of money via Crowdcube since 2015 and I’d have to think very long and hard about ever paying them 1.5% to access a round. The direct alternative is investing in listed companies, which retail investors can do for fractions of a percent now, see Freetrade etc.

Agree, although I believe Monzo have an exclusivity contract to Crowdcube. Not sure how long for…

Investing costs money however you choose to do it. Crowdcube offers a service for investment. Through that service customers have an opportunity to buy shares in companies that have the potential to deliver 10-fold returns on that initial investment. Or lose everything. If you don’t want to pay £15-30 for the chance of being involved in that, then don’t invest. Monzo don’t owe anybody the chance to be invest… they don’t even need to let anybody invest at all.

For anybody claiming they are losing money is not correct. Yes, you must factor it in if you have a limited amount of cash that will limit potential return. BUT. Your 1.5% of the overall value was never invested so there is no cost to the investment. Only a cost to participate in the investment. There is an opportunity cost but I could say I have a £10m opportunity cost in Amazon because I never invested early. It never existed!

CrowdCube essentially provide a service, which consists of a vehicle through which to invest in companies, hold your investment and eventually sell your shares. From my perspective, it feels fair to pay for that service.

If they said they carried out extensive due dilligence on those companies, I’d expect them to charge more.

(I write this having recently seen my one of my investments through CrowdCube plummet by over 90%, as that company was bought out for only a tenth of what it had previously been valued at! However, I also have made substantial nominal gains with my investments in other companies, though - as they say - you shouldn’t really count your earnings until you’ve actually crystallised them by selling them!)

Having said that, Monzo may or may not have struck a deal with CrowdCube. Either way, if you feel unable to justify those fees, you shouldn’t invest. And if you think CrowdCube are being overly greedy, you could always invest in CrowdCube themselves to profit from that perceived greed. They’re currently raising funds from existing investors before opening up to new investors, and have apparently raised £1M over the first 24 hours (which, amusingly, is 900 times how long it took for Monzo to raise £1M during their first investment round 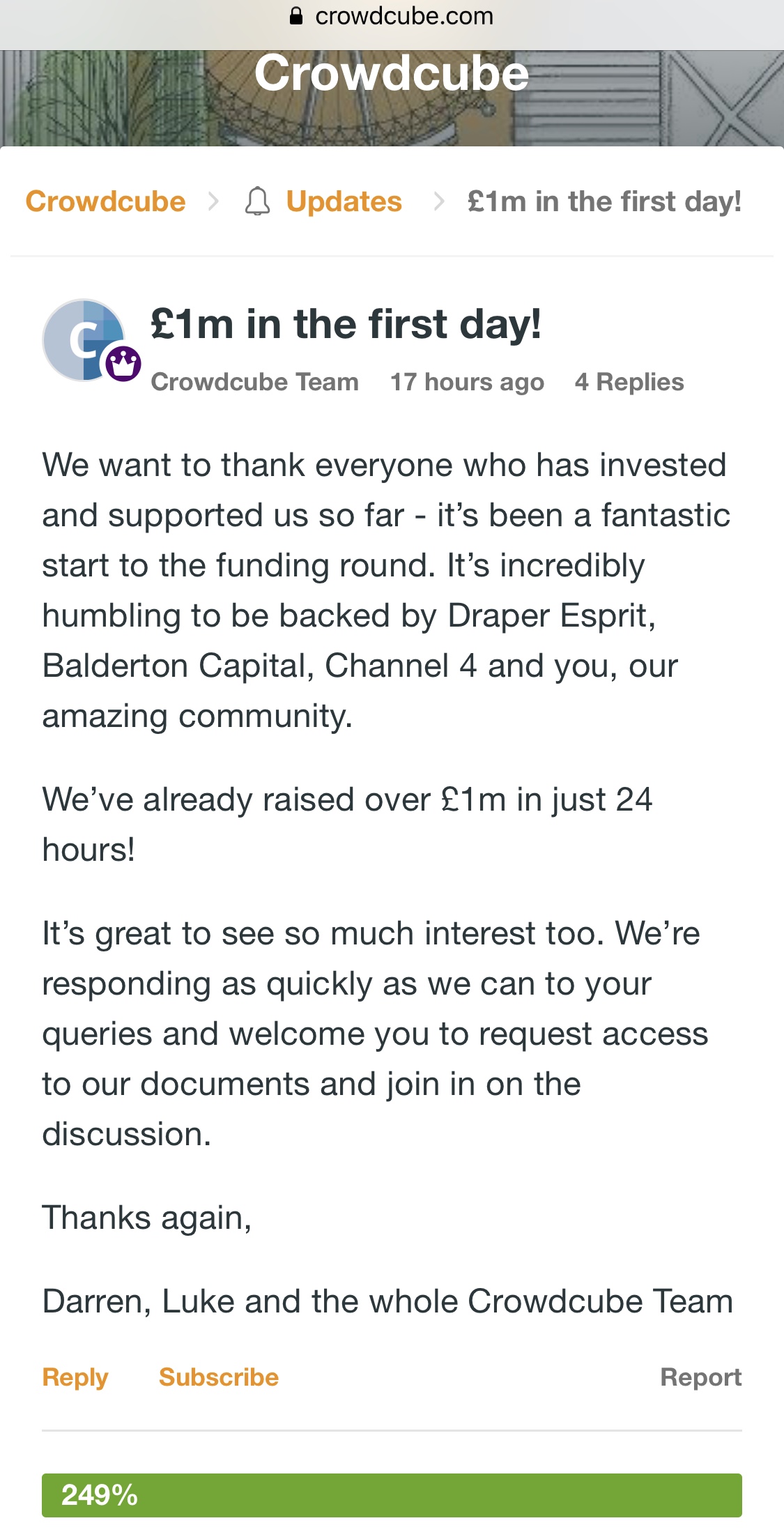 I was thinking about investing in monzo but I haven’t before,
Where do I start ? I’ve made a crowdcube account.

Do I just wait until a date and then swipe through on the app until I find monzo?