This is the early stages of an idea - so not sure exactly how it would look or work, but it would be cool to see how you compare to other users in terms of earning-to-spending-ratio etc eg/ “You saved 15% more of your earnings this month than the average user“. Obviously you could take this further, and give more insights and analytics. Just an idea.

What’s an average user though, that’s where things get tricky, how do you get to those figures.

This wouldn’t really work and could cause more harm than good if people were constantly reminded they spend more than the average Joe, or have little savings compared to the next Joe.

I’m just thinking of things like those on benefits, your heating was 80% lower than the average user, your food shopping was 90% lower, you get my drift. And that’s just one small subset of the population. It could cause more harm than good in a way.

Very true, probably ill-conceived, and a harsh reminder for those who are already struggling the most

This is a terrible idea. Why would anyone even want to be compared to anyone else?

There’s no need for that kind of response. The whole idea of this kind of forum is a space for creativity and fostering new ideas (is what I believed?)

Not all ideas will be great - but none should be shot down in such a unmeasured tone, otherwise the next person viewing this might think twice about posting their genius idea that takes Monzo to the moon - for fear of the same beratement. Bad ideas also sometimes grow in to great ones if given the right encouragement.

One thing all good businesses and business people know is there’s no such thing as a bad idea.

The suggestion was innocently motivated, and I wasn’t thinking it would include negatives (“you saved 30% less than the average”), but more “you routinely save 12% more than people with a similar monthly income to you”. Personally, I believe this could be valuable insight. It didn’t deserve your inflammatory comment.

Please don’t comment this on the next person’s idea you don’t personally agree with. Take heed from the other commenters who also didn’t agree. I respect them a lot.

Thank you and merry xmas

Personally I don’t think anyone has been inflammatory just that they haven’t agreed with your idea.

It’s an interesting one but super difficult to make it in any way relevant. Which is why Spotify/Apple do your year in review.

One that was more specific e.g. “you’ve spent more on eating out this month” - I could get onboard with.

Have a great Xmas yourself.

Comparison to your personal average would be good (i.e. cumulative spending progress for current month relative to your average month). Or perhaps comparison to same month in previous year/s. Tado has something like this for energy usage, and I like it.

Nest do a similar thing re; energy usage, taking the average use and placing you into a group compared to that. 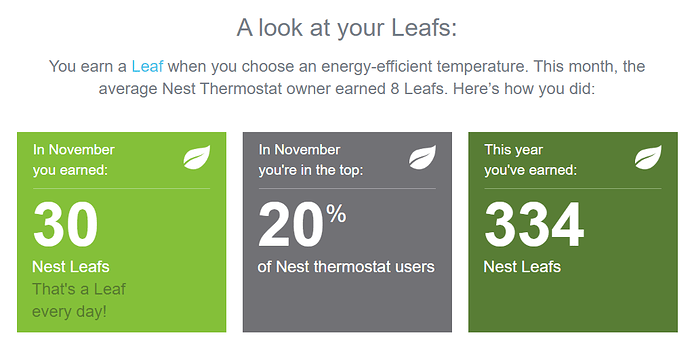 It’s more-or-less pointless but it keeps you aware of energy use and keeping it down where possible.

I suppose they could be using it as a verb. In the same way a plant leafs throughout summer, perhaps @davidwalton’s nest similarly (virtually) leafs.

I suppose they could be using it as a verb.

Except, quite obviously, they’re not.