Just signed up to Chip and have been loving it so far. If Monzo could integrate this app or even come up with something similar of its own that’d be great.

I’d like to see an option like Plum’s app, I’d be useing it now but as far as I know it doesn’t work with Monzo. It rounds up your card transactions to the next £1 and puts that into your savings account. You don’t have to think about it and you don’t really notice such a negligible amount.

Liking chip over the last couple of months and have amassed a reasonable sum without any pain.

Somewhat concerned by the lack of transparency - if there’s a Lloyd’s account opened in my name, I’d like access to the details, as I’m slightly sceptical about any financial product using only my mobile number for ID and no access point beyond a mobile app, but then I felt the same way about transferring £100 to open my Monzo account, and that didn’t work out too badly did it?

I guess the benefit of almost unnoticeable account deductions to amass a savings balance outweighs the risk, but I’ll be looking to Chip to improve transparency over time.

Anyone interested and wishing to add 1% interest for a year, feel free to use my code to do so: MT90V9 - we’ll both benefit!

I’ve recently started using chip - would be great if it could link to monzo. Sadly I got it before reading this topic and so didn’t use a referral code and therefore don’t get any interest. DOH.

Liking chip over the last couple of months and have amassed a reasonable sum without any pain.

My bad, you are indeed correct, it’s Barclays, not Lloyds.

I’d like to see things like the 52 week challenge. Save £1 in first week, £2 in second week … £52 in second week. Save £1,378 all told. Something interesting to introduce at new year and/or let people start whenever they want 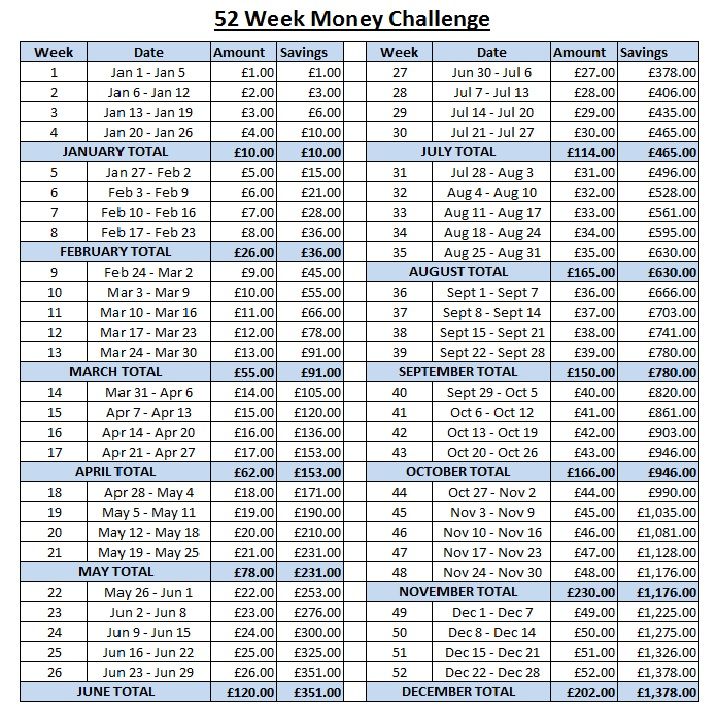 Chip is interesting as well. (If you use promo code MZHUYJ you get 1% interest immediately (and so do I))

Or ability to round up to nearest pound and save the change.

That’s a situation where I think the Monzo API would really shine. I’d love to auth a service to move my money automatically into my monzo saving pot.

I think Pots and Savings Goals have been spoken about earlier here, or elsewhere, in the community.

For those who don’t follow, Chip has updated its app today with savings goals.

You can sign up for Chip at www.getchip.uk
You probably won’t want to, but if you start saving with promo code MZHUYJ then we both get an extra 1% for a year. 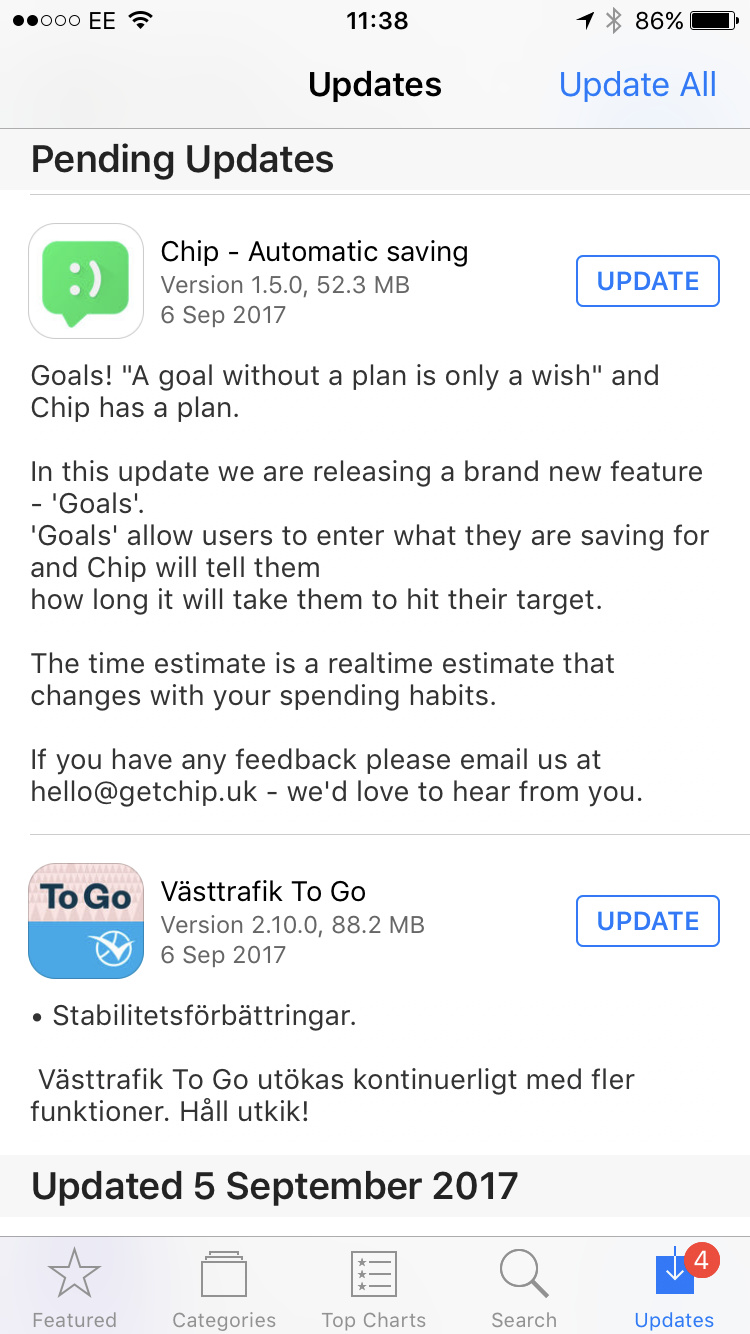 Spoke to in app chat support today, they confirmed they working on Monzo integration. Needs to be a closedloop to even be able to deposit, so won’t work until they have finished.

Waiting game, but I think will need API and full current accounts to be done before we will see this.

Spoke to in app chat support today, they confirmed they working on Monzo integration. Needs to be a closedloop to even be able to deposit, so won’t work until they have finished.

Waiting game, but I think will need API and full current accounts to be done before we will see this.

Great news, would be a welcome addition (though I can’t see how this benefits a Monzo business model - encouraging balance transfers (to earn interest) with a 3rd party - while a great ‘marketplace’ addition, seems harmful to Monzo’s only opportunity to earn via deposits).

Happy to wait, as I can see this isn’t top of the priority list right now (though we do need to see benefits of the open APIs soon, IMHO).

Monzo have said few times now that they intend to build the platform for exactly this. They see monzo has the hub to manage your money as you see fit

Do you know if monzo will work with plum or chip savings in the future, or even better if monzo would be building something like this into there own bank. Thanks

There is a thread about this here

This is a clever idea that I’ve just come across. It’s a bot, called Chip, that integrates with your current account, analyses your recent spending to calculate how much you can spare and every few days it debits a small amount and transfers it to a savings account. Spend more and you’ll save less. Spend less and you’ll save more. I’m sceptical that it might put me into my overdraft, but they guarantee never to do that so I’m giving it a fair shot. I’d really like a Monzo integration, but I’m …

Monzo Pots are also in making and will help with saving;

Hi there, I’d like to give you a very quick sneak peek on something that we’ve been exploring lately. The idea of this is to let you create pots to segregate your funds. Many people tell us that they’d like to “hide” money away from their current account (so they can budget better) plus all the usual stuff we’ve discussed in the forum: rules to roundup and save pennies automatically, goals with a certain amount as objective, rainy day funds, holidays, etc. On top of that we think this could b…

With a degree of regret, I have had to drain my Chip account of almost all the funds and suspended their savings activity.

As I said before, I am not assured that they claim that an instant access account has been opened in my name with Barclays, as there is no visibility or evidence of this; you simply have to trust them.

In September my balance decided to reflect not my savings balance, but my bank account balance, for a day or so. Support apologised. Slightly unnerving.

About a month ago the automatic transfers just stopped. Spoke to support and was promised a transfer would happen ‘on Monday’. Monday came and went, nothing… I had to continuously chase support, they promised it would happen ‘next day’, and again, nothing happened. Eventually, a transfer took place, but for a sum at least 200% of the highest payment ever previously taken.
It seems to have stabilised now, but was unnerving.

Support (and their website) had previously advised that the maximum interest rate is 5%, and any additional interest % achieved would be held for a 12 month period (after which the original interest % is cleared) and will then become active for the next 12 months. Fair enough. So how is it that their system says I currently receive 6% interest?

In the early days, there was ambiguity as to how interest was paid, and support again gave me a specific date for my first payment - the beginning of November. That date came and went, nothing. A week later I challenged support, and was told they were aware (nice to let customers know there is an issue) and it would get resolved. A week later, and they are still looking into it, promising me I will receive my interest.

I appreciate a startup will experience issues, but when their whole premise involves access to my bank account and a lack of transparency and has demonstrated issues in every area of their offering (despite the attention of their great support person), I can conclude only 1 of 2 things: 1) There’s something intentionally dodgy about the set up (which I don’t believe), or 2) their infrastructure is simply not up to the job they are trying to do with it.

Until I see evidence of an improvement, I sadly no longer feel the benefits outweigh the risks.

It can be unnerving when facing the issues that you point out. I don’t know if I have a different tolerance for issues, work in IT so I know how things work (or don’t lol) or have much less in saving to worry about

Have you seen that they’ve gone through a round of investing and are looking to get a banking licence in order to be a challenger bank?

The documentation that you can get if you register/invest is interesting and might go some way to alleviate your concerns.

For those of you who were worried about signing up because Chip were not on the FCA’s Financial Services Register (which my bank said they had to be), well they are now. I would guess they appeared on the online register some time in the last month or so.

If you find this info helpful, feel free to use my code O3509M, which will get you a starting 1% and get me an extra 1%. Apologies from a newbie if you knew already.

How close it Monzo integration with Chip. Can somebody tell me honestly?

My understanding was that Moneybox couldn’t do round ups because the API hadn’t been released, but they now can do them…