Announcing Our £22m Investment Round and Crowdfunding!

It would be good to have some clarification from the Monzo team - will unsuccessful pledgers be given early access to the current accounts at the same time as the investors from this round or will pledgers be next in line, after the investors?

Agreed, it does sound a bit ambiguous, do we get access before or after the investors, or is it like american airlines boarding:

Will Monzo / Crowdcube be releasing any stats on this investment round, specifically:

It’d be interesting to see how the userbase is reflected in this opportunity.

That is a positive touch

@effsee: I’d love to do some stats. @Naji what do you think about a blog post later this week or next week with them?

what do you think about a blog post later this week or next week with them?

what do you think about a blog post later this week or next week with them?

Cool. Look forward to it

Now that the crowdfunding is winding down, is it possible to release enough data and tools to be able to reproduce the ballot and possibly see where we might have placed? For all the talk about it at the Open Office, we currently only have a hash of one component of the seed.

We don’t have the bandwidth to do this at the moment I’m afraid. The legal implications around sharing non-aggregate data like this would be another consideration. Would it not make more sense to dedicate this effort to focusing on what we can do better in future crowdfunding rounds?

In terms of duplicates, there were a handful of duplicate pledges <10 which were identified and de-duplicated by us. We can’t comment on how many people invested more than what they pledged until we have the full list of investors at which point we can look into this further.

Ah, that’s okay by me. Worth a shot at asking, thanks for looking in to it!

My one comment would be that there was a lot of stress on being able to verify the ballot’s randomness and wording suggested that anybody could verify it, this is not the case by the sounds of it.

I didn’t realise it was open to non card holders at all.
A bit annoying if investors selected weren’t customers - seems against the whole point?

Finally it is over. The last stretch was taking forever! Can’t wait to see what happens next. 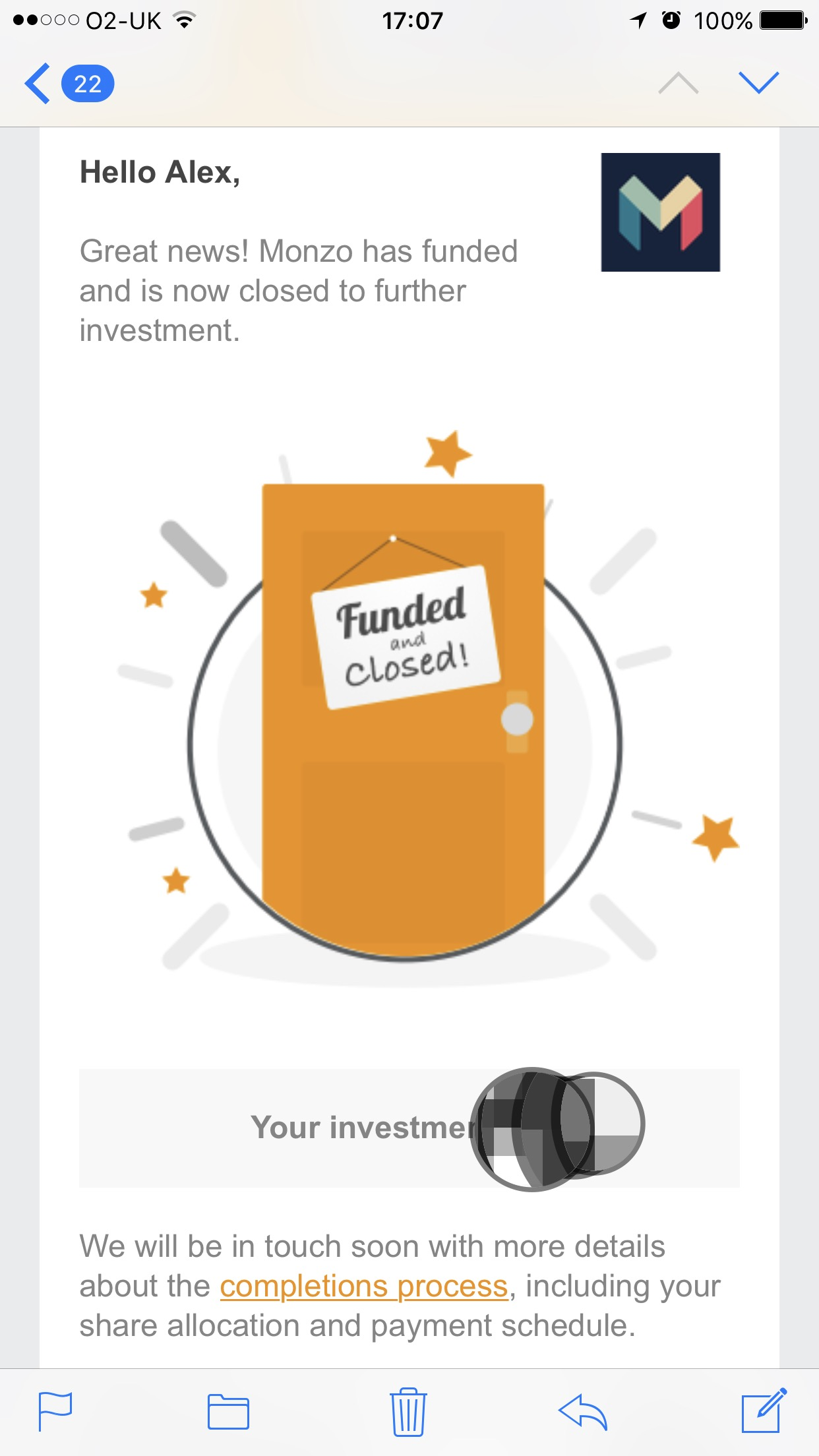 I won’t lie this whole thing is annoying for those on the receiving end of that email, not only did non-card holders get in, but various people who pledged a smaller amount then went ahead and gave more (and some even openly posting on the forum about it) stealing spots from people at the end of the ballot.

Would have been nicer if Monzo actually took the time to pause at the end, find those people and adjust their pledges (or cancel them outright for not keeping in the spirit) then re-open the ballot for the remainder still left. But sadly it seems chasing the goal of money went ahead of keeping fairness to those who wanted a chance.

Been with Monzo over a year; User ID is ridiculously low and got 14 friends in (who a load of them got to invest - going to be awkward conversations when they are Investors after I sold them the idea and am not); had many chats with Tom directly back in the day; meanwhile I’m sitting here a year later with nothing.

Honestly sucks and while I do get a ballot and winners and losers - I’d sooner fairness went before goal achieving. Maybe future ballots can have first dibs to those who missed out - or use a different metric than just ‘luck’ like User ID Age, or Number of Friends Referred or Contributions to Community etc.
Something that actually rewards loyalty and contributions over pot luck.

But to those who did play fair and got in, good on you

If Monzo plays out and finds a way to make money and eventually floats - it should be a very good return.

yep. I think Monzo should have limited people to a maximum of the amount they pledged

I’m also someone who lost out on the ballot, got my email this afternoon.

I can’t say I’m not disappointed that I didn’t get the chance to invest, but TBH I understand that it’s random, so what can I do? I can bitch and moan about something I had no control over, or I can move on and look to the future. Perhaps I’ll get a chance to invest in a 3rd round, if there is one, perhaps not. I certainly won’t lose any sleep over it.

What makes me laugh are the people on Twitter who are having such a mardy strop about not being chosen to invest that they have asked to close their account. Madness.

I wish those people hadn’t pledged.

@tbutz Hit the nail on the head mate

A bit annoying if investors selected weren’t customers - seems against the whole point?

There was more than one point.