Stumbled across this today, yet another foreign bank heading to these shores… this time from Russia!

Anyone think they’ll be a success?

I tried to find a Donald Trump emoji without success

Not just the Trump thing, I reserve judgement until more evidence either way, it’s the bots and hacking and state intervention in business. Might be totally unjustified but doesn’t sit easy with me

Could we keep this on topic please. As per the Code of Conduct, we prefer to steer clear of overly political posts.

I’m afraid if this thread continues in its current direction, it will be locked.

Edit: I have now removed the off topic posts

Could we keep this on topic please. As per the Code of Conduct, we prefer to steer clear of overly political posts.

I’m afraid if this thread continues in its current direction, it will be locked. 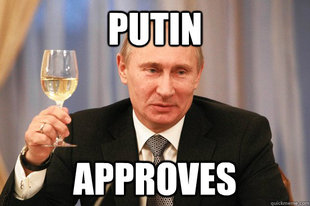 How do you remove the politics when it’s kind of linked to how the product is perceived? Ok so maybe not the gifs (awesome as they were)

As per the Code of Conduct, we prefer to steer clear of overly political posts.

Can you link to this, please? On scanning quickly, I cannot see a mention of this. Very happy to be corrected though

I apologise - that isn’t explicitly mentioned. Thanks for making me aware - I will get that corrected :).

Deliberately derailing threads, or other forms of trolling.
Posting low-value content that doesn’t add to the discussion.

are mentioned as things we try to avoid.

I would also like to draw your attention to:

Just because something is not explicitly prohibited in this document, that doesn’t make it automatically ok.

My fun has been had, I shall resume normal duty.

did anyone else get a questionaire from Amaiz today?

Yep (though I had to email them to report a broken link before I could complete it).

Essentially, it seems to me to be a pre-paid card with some account aggregation thrown in. Probably shan’t bother on that basis.

Number 4 is going to be subjective. Revolut have appauling customer service but a really good product that for many people seems to outweigh that.

I also need to be careful not to get too many accounts, I currently have Coconut, Starling, Monzo, Lloyds, Curve and a few more. So I’ll see what the initial offering is before I sign up.

I’ve trimmed my sails recently, a task rendered easier when you can define what a deal- breaker is - crappy CS, slow payments, no instant notifications etc…

I’ll stick with Curve in any event. It’s a novel tool and just works. As it stands I have - Starling, Monzo, Nationwide (empty). I’ll give N26 a look.

I’m definitely trying N26, i know it’s vanity but I really want a metal card and since I don’t qualify (now or ever) for a centurion card I’ll take whatever else I can get my hands on

You really have no shame, clearly

Considering people generally seem to frown upon “funny” release notes… I’m not sure they’d take kindly to this rather bizarre email from Amaiz I just received!

Don’t be spooked, it’s just a bit of fun.

What kind of monster are you?

Halloween is nearly here - which means all sorts of scary things are about to be unleashed on the general public like fancy dress, trick or treating and monster hangovers - especially among students. It’s also, according to legend, a night when the more traditional followers of All Saint’s Eve shun meat for vegetables, potato pancakes and soul cakes - whatever they are!

So to get you in the mood we’ve come up with a quick quiz that helps you discover which monster you’re most like - no doubt something that’s nagged away in the recesses of your minds for some time.

This quiz isn’t based on any scientific study – so don’t treat the result too seriously. (You’d be surprised).

Have a Spook-tacular Halloween,
The Amaiz Team