The MSE 6-month poll - Starling tops this one, with 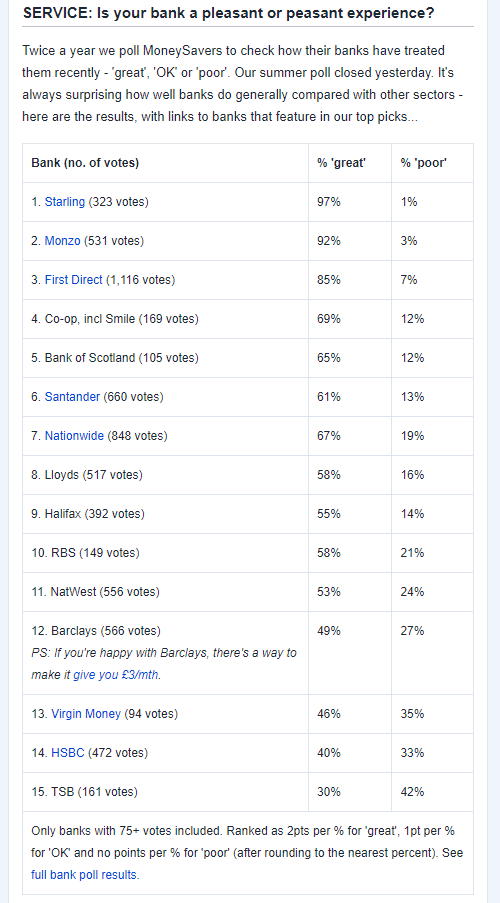 Most interestingly, I think, is that the weekly email included this tidbit:

Since the last poll, First Direct has lost a little ground on Monzo and Starling. This echoes the bank’s own apology that its call waiting times have increased, due to misjudged demand as lockdowns lifted.

Its Trustpilot rating has plummeted far further - likely as those who have had problems have probably seen that as a destination to vent - while most customers in our poll still really rate it. One to keep an eye on.

So, while people complain about Monzo’s customer service, it seems like even First Direct has struggled to maintain their quality.

I noticed that too. And even with over twice as many voters for FD compared to Monzo.

That’ll rile the geriatric old boomers on MSE who think telephone banking from 1989 is cutting edge.

So, while people complain about Monzo’s customer service, it seems like even First Direct has struggled to maintain their quality.

To be frank all that happened is their call wait times increased. They still offered 24/7 support where I expect most issues were resolved on first contact.

Now imagine the outrage if the phone hours were cut to 7am-10pm, and after waiting on the line for 5 hours you’d be told that a specialist will call you back within 12 hours and until then you can’t call their number again

You mean that the rants on here aren’t what everyone experiences?! I am shook!

Do you think the people voting HSBC and the likes actually come back to view the results.

And then actually go

maybe I should try another bank

I think most people see it as a huge hassle to change banks. They fear the risks of mortgage payments not going etc. So the “I hate bank, they were terrible to deal with” is the least worst option.

And most of the time, the reason people hate a bank is their own fault anyway.

Agree with all of this. I think there’s also a perception that banks = the Big Five, and that they’re all the same/as bad as each other anyway.

And also a weird need to have some sort of branch option, even if this is ever-diminishing. I’m sure most people wouldn’t even try First Direct because they want to be able to go into a branch, let alone Monzo or Starling or even Smile.

Are there any banks (or eMoney) that are better than Starling and Monzo?

I’ve had both for years now and they seem avg.

Maybe the novelty has completely worn off but I get the same experience with my Halifax account.

Maybe one day we’ll have JPM Chase, and hopefully they’ll be quite fintechy

That’s probably up there with HSBC in terms of banks I really want to die. There’s zero chance of me banking with them

I rate Revolut, Monese and Wise in terms of well put–together, we’ll featured apps. Just depends on if you’re concerned about e-Money licences. Once Rev gets that licence they’ll be the feature-leader.

But if you’re happy with Halifax, does that matter? The pace of innovation will always tail off but I still see Starling as really innovative (Monzo less so, Halifax following rather than leading).

I think there’s also a perception that banks = the Big Five, and that they’re all the same/as bad as each other anyway.

And also a weird need to have some sort of branch option, even if this is ever-diminishing. I’m sure most people wouldn’t even try First Direct because they want to be able to go into a branch, let alone Monzo or Starling or even Smile.

I agree with all of this totally.

These factors mixed in with powerful inertia due to the perceived “difficulty” of switching add up to make most people (who aren’t really interested in banking or see it as anything remotely exciting) think there is no reason to consider a different bank than their current one at all unless they have had a seriously bad experience with their old provider.

That provides the motivation to leave in a fit of pique, and that’s usually enough to clear those hurdles.

Otherwise, it’s a big ask - some banks literally pay you to switch to them, yet most people wouldn’t consider it.

PS: I know that not everyone realises it, but you can use HSBC for basic branch functions as a First Direct customer, and Co-operative Bank branches if you are a Smile customer (although there aren’t many of those). There is also always the Post Office for 99% of banks (not Monzo, of course, but all the big high street names) which is another thing lots of people don’t realise.

Monzo is a mess these days, Starling chugging along being Starling.

I’m not entirely sure what I’m expecting.

Starling and Monzo are top-tier fintechs and Halifax is a solid choice if you ever need a branch for anything.

Feels like years? Only in the last year, Starling pretty much invented the secondary card for someone else to go shopping on my account, and before that, enabling the euro account and now a secondary account on the one card. It’s spent lockdown turning on a sixpence to provide pandemic lending, and also enabled young peoples’ accounts (card and now app)

That’s just Starling, with which I’m most engaged.

Do you see other High Street banks out-pacing Starling in their innovation?

I think most banks have ratcheted up the pace of their innovation since the emergence of the fintechs.

I don’t have specific examples to mind, but they have been rolling out things at a steady pace and many of them now have instant or near-instant notifications.

It’s still largely in the realms of “catching up” rather than surpassing Monzo, Starling and Revolut et al, but it’s promising and good for everybody.

As the saying goes, a rising tide lifts all boats (and that has seemed to be true in the banking arena).

I think most banks have ratcheted up the pace of their innovation copying since the emergence of the fintechs.

Fixed that for you. They might be now running the same speed, but they’re still half a lap behind. The incumbents aren’t “innovating”.

But other than that I agree.

I agree that they are generally behind, but some things are innovation (you’re right that it’s largely copying though).

One example of an “unlikely innovator”, for example, is TSB. They’ve developed a feature they call Money Balancer which automatically moves money from a linked savings account to cover your main balance if you are about to go overdrawn. Useful if they are your main bank and you are not savvy enough to have your savings elsewhere (their rates are derisory so the feature is otherwise not very useful).

Virgin Money has a thing called Sweeps which go in the opposite direction, and they’ve had it since B first came out (so before Monzo’s Salary Sorter).