The $ billion and half valuation

A very similar article on the Financial Times regarding this all. Some funny comments on the article too, this is my favorite.

"The way that the likes of Monzo and Revolut work is to make some loss leading offers particularly in the area of overseas spending, cash access. and international money transfer They thereby attract a profit free customer base and start boasting about account numbers.

Next step… they start to pull back on some of the too good to be true offers as it becomes apparent that the business model isn’t driving any revenue.and is driving a lot of cost."

The main question is do Monzo have ping pong tables?

The main question is do Monzo have ping pong tables?

I had just assumed they did

Two capital allotment returns on companies house. Recently filed but the PDF is blank when downloaded. All but confirms a £98m raise once docs are live share price should be quoted

Sounds like similar (albeit valid) critique to this article which made FT Lex today. 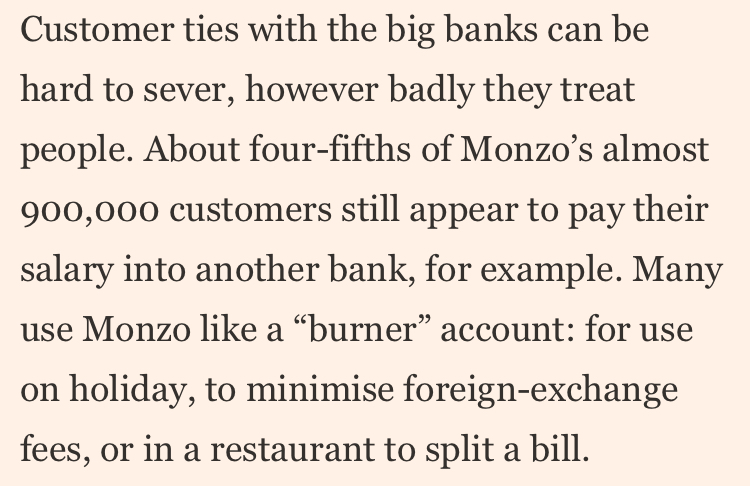 Page 2, total nominal value per share = £10.57. I’m not great at reading financials but does this mean what I hope it means?

Actually it seems to be a sum of previous share prices. Some able to explain to me?

This is the nominal/basic value of the shares - everything paid on top is what is called share premium. So the share premium will be circa £98m (ie almost all the investment)

Hey, I’m with Bulb. Anyone want a referrer code?

Clearly, I am down with the kids.

Ha ha - I might frame that. Monzo should be flattered that Lex write about them, and in a couple of years, they can wave it at them. I still don’t get this obsession with the average balance of £150. Why would you store more than that in a current account after bills?

That would make sense, c£98m from institutional investors and c£20m from the crowdfunding. This, at today’s exchange rate, is c$150m.

Interesting. I hadn’t seen the 4/5 figure expressed in those terms before - I had the impression that it was less.

There’s also an interesting culture clash here. This article is comparing Monzo’s valuation with traditional banks, whereas I think Monzo would see tech companies as its natural comparator group, which (I think) would make the valuation seem within expected bounds.

I still don’t get this obsession with the average balance of £150.

I’m confused about what this figure is telling us, actually. What is it an average of? (I understand that it’s the balance, but the mean average of each account daily, divided by days in the month? A sample date?) And given Monzo make money from overdrafts, I’m not sure what I’m meant to take away from it - and what sort of figure is “good”?

Well most banks make money by assuming that not everyone will want all their money at once, so they will invest a large part of the total for profit. This is where you get the links with unethical investments etc, but I think that model will die down anyway as people get more financially savvy and realise it’s better to invest your own spare money than lend it to a bank at 0.5% so that they can profit from it. This is why a lot of bank accounts force you to keep a large minimum balance in return for perks. It’s to (partially) compensate you for the opportunity cost of not being able to invest it yourself. A good bank is one that doesn’t encourage large balances, but offers services like overdrafts and access to other products you might need in your day-to-day life, such as Monzo.me, bill splitting, spread the cost, payments with friends, etc.

Yeah, I get all that - I suppose my question was purely in relation to the statistic that’s banded about and what its usefulness is.

To come off the fence and put it another way, I think it’s a meaningless measure. I’d be much more interested in number of accounts that receive salary payments, how many are daily/weekly active, revenue from overdrafts etc. These figures give me information I can easily interpret and act on. I’m not sure the funding figure does either of those things.

This all looks like someone, or several people, realising their share options to me. Strike prices of 20p, 51p and 77p.

Page 2, total nominal value per share = £10.57. I’m not great at reading financials but does this mean what I hope it means?

Can someone confirm this?

thats the paid up share capital for Monzos 105 million shares - a nominal value per share of 0.0000001p - so the 105 million shares in issue are nominally “worth” £10.57 - nothing to do with the share price in this next funding round