@beningreenjam my only concern with using that particular improvement to solve the problem I’m talking about, is that the day that I buy fuel towards the end of the month is always different, so it would mean I would have to keep changing the budget period

I agreed with this. But I’ve just seen the logic behind the ordering - the categories that you’ve spent the most on i.e. the ones that you need to pay the most attention to, are at the top of your list.

Errr actually no (at least not in my case).
The second item in my list is Transport on which I have consistently never spent more than £50 (since starting using Mondo in Jan) whereas the third time in my list is Groceries which is always more than £200.

But which of those categories have targets?

Actually, never mind, it’s pointless for us to discuss our two use cases, Hugo will have the data to determine what the majority of users experience, that was just my guess ¯_(ツ)_/¯

But which of those categories have targets?

Well actually the first three items in my list all have targets but the order seems to be random.

But you are right: Hugo will have the data…

Targets is an absolutely brilliant feature!

If I was able to create my own categories, this could basically replace my budgeting app. Any chance of that in the future?

It’s unlikely, for the reasons Hugo’s explained here. But the categories are being reviewed in a few months. There’s been some more discussion about sub / custom categories in this topic -

Hi, Two features I think we need: The ability to create custom categories. The ability to split a transaction across multiple categories. Eg a big shop at the supermarket could well contain several categories of spending rather than just all be groceries. Cheers, Mike

What are the chances of a simple update that will allow users to customise the start date of their month? I love targets, but am one of those people that doesn’t get paid at a month end. Changing the date would make targets really useful as opposed to just interesting

That feature is being developed

but bearing in mind that the pulse graph, the target’s alerts calculations & perhaps some other features that I haven’t thought of, will need to adjust themselves to work with the new start / end dates, it’s a little bit complex to implement. 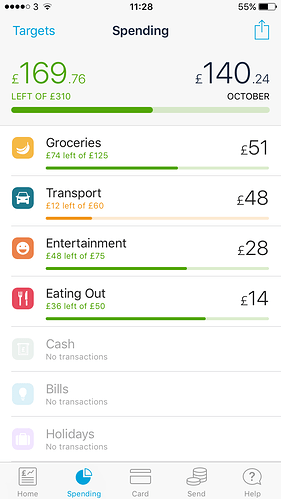 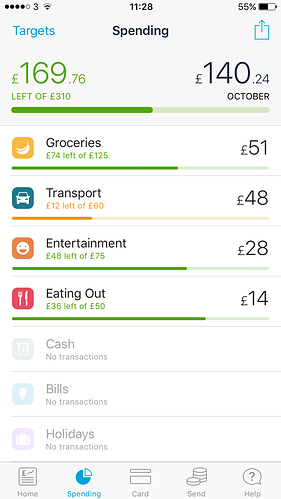 Neither the target nor the amount spent for that category or the total has changed though which is pretty odd. Had you made a transaction since you took screenshot 1?

Sorry for the confusion but the 2nd screenshot is photoshopped. I just think the bars on the categories should go all the way to the left like the monthly target bar. It would make it easier to see which category is doing badly compared to the monthly target.

I guess no-one knows yet as we havent had a month but was wondering - is there any congratulations messages/feedback etc for meeting spending target? Would love to have something like this ala Apple Watch activity

Yes there is, Hugo shared this preview of the summary that you’ll receive at the end of each month

Just thinking this through so more, bearing in mind that the scales for the category targets are different from the total monthly target, wouldn’t a comparison between the two be misleading?

So it’s good that the design prevents easy comparison of category’s bars with the total.

I have to disagree, before Monzo I used this app called OnTrees and it was pretty bad but it had one cool feature. You knew exactly if you were spending too much in a specific category depending on the day of the month it was. 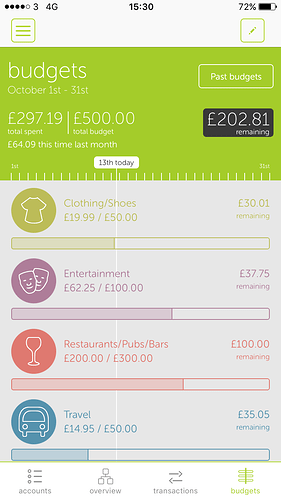 (Terrible design but…) As you can see on this screenshot I’m doing good in clothing, really good in travel but very bad in Entertainment and Restaurants. And I know all this information straight away.

I know that Monzo has the whole green/yellow/red but I feel its not enough, by simply moving the bar to the left you can see how any category is doing compared to your overall target.

I confused myself when writing that last post…take 2 -

Just thinking this through so more, bearing in mind that the scales for the category targets are different from the total monthly target, wouldn’t a comparison between the two different categories be misleading?

So it’s good that the design prevents easy comparison of category’s bars with the total.

The design in your screenshot enables you to easily see where you are in the month vs your category’s target, for each individual category.

you can see how any category is doing compared to your overall target.

I like the design & how easy it easy to see where you are, in terms of % spent from each category target vs % of the month that’s passed, although as I’ve discussed here

I appreciate we can see things differently but I find the spending screen really counterintuitive when tracking against targets. Functionality is that when nothing is spent against a category the bar is full and as spend occurs the bar decreases to the left. I would expect it to be the other way around, the bar starting to grow from left to right as the cash goes out and I am heading towards the target. e.g. I have #164 of #180 left to spend on eating out. The bar is solid almost all the way …

I prefer the orientation of the current design which is focused on amount remaining, rather than how much has been spent.
You could incorporate the position in month tracker (although it would be in reverse chronological order, which would be hard to get to grips with), either extend the bars - as you suggested - or align the timeline with the category bars & keep the rest of the design the same.

In other words, this is hard to explain in writing & I’ve made a mess of my comments

I thought I was running the test flight build but targets never appeared. Do I need to do something?

They’re available for TF & the standard app now. You should find a target button in the top left of the Spending tab.

I somehow was on the old test flight so deleted that and re installed the App Store version. All good now