I think it is fair to say that Starling has continued to release functionality throughout the last few months and is likely ahead of Monzo in some areas… but it is also valid to say that there has been a pandemic, Monzo was hit hard, and of course things are going to slow down

Hopefully as staff return to Monzo and transactions increase, we can start to see the pace pick up and try to regain some ground on Starling (and Revolut).

I know they have launched Cheque Imaging which is great.
They came up with physical a card linked to spaces which is fantastic for people shielding in the current crisis, but what else have they done to their personal accounts lately that doesn’t directly copy off someone else, especially Monzo?

Not being salty or defensive of Monzo but am genuinely interested? I keep seeing people talk about Starling doing and innovating more? I opened a Starling account because of this but I’m just not seeing it?

Feels more like catchup rather than innovating and getting ahead does it not? Or shall we just put Monzo down because we can?

Let’s not forget, from what we know about the budgeting tier of Plus, a lot of work has gone into that the same way as the open banking stuff, just because you can’t see a lot of the stuff they’re doing doesn’t mean they’re not doing it. Building their own Open Banking Platform is huge but seems to be getting swept under the carpet by some because the exact piece of functionality they launched for it first doesn’t suit their needs

This is a great feature. Similar to this suggestion:

More and more companies will stop you using services if you cancel the free trial early. I just used the LinkedIn free trial and I find myself setting different calendar reminders to cancel different subscriptions. I’d imagine being able to set a dated cancellation isn’t too crazy and I have not heard of any other bank doing this.

I’m not sure about that. I still think the forum is incredibly useful to Monzo for stuff like bug reports, especially when launching a new feature.

I also think the “Feedback & Ideas” basically provides a stream of ideas that Monzo can use if they want. I really don’t think it would be a smart move to remove it.

I also think the “Feedback & Ideas” basically provides a stream of ideas that Monzo can use if they want.

I can’t see too many companies agreeing to an easy cancellation mechanism so it will be interesting to see if it works in the medium term.

You would be surprised how difficult some intentionally make it, they do not want you to be able to cancel from within an app they do not control.

I subscribed for contact lenses, really just to get some daily ones for £1 and they make you call up to cancel!

As someone who works for a subscription based company, a lot of it is around getting the data on WHY they’re cancelling. However obviously thats less the case when they’re awkward around cancelling such as requiring you do it over the phone, that’s just bad practice in my opinion and predatory.

That’s really common… sign up easy, leaving you have to phone up or write to them with 30 days notice.

When I sign up to things these days I try to find out what the cancellation process is. If it isn’t as easy as the signup they don’t get my busiiness.

I’d still count that as “recent”? They also had the “Future of Monzo” in November '19.

There’s been no ‘events’ this year, and perhaps that’s the pandemic of course, but I still imagine there’ll be some regular rythym to this kind of thing.

If you can’t read this small print about how to cancel then you are the contact lense customer for us!

Agree with this mostly.

Probably the bit that’s 100% worth keeping, even if the rest of the forum is retired, is the “Travelling with Monzo" section. I know that given current circumstances its use is reduced somewhat, but for my previous trips abroad, it’s been a goldmine of useful tips and tricks.

I find the urge for constant product changes a bit much, there is nothing wrong with what would be considered a tock year.

Making sure the platform is solid, the new app design works well etc etc. Monzo still has a far better and cleaner UI then its peers, legacy banks throwing trinkets out is fine, but basics like SCA stinks on those apps, and we’re starting to see the first bits of open banking functionality come along, as well as the New Plus in coming weeks. In addition, Business has launched and is doing well, and that needs building out properly, without £100m of free money from the government.

I do see a lot of these new features and wonder what the user need actually is, or what the market is.

I do see a lot of these new features and wonder what the user need actually is, or what the market is.

Quality over quantity any day

Even more so if new features are innovative and help get us out of the rut of “normal banking” we’ve all been stuck in and putting up with for all these years.

Take easy bank transfers as an example. So simple yet so effective. I’d rather wait longer between updates to get more things like this. Even if I have no use for it myself.

I have to say I’m in the same boat as the OP. Generally not a lot has happened over the last four months however many ‘traditional’ banks have upped their game big time and it does make me wonder if there are still the same amount of advantages of Monzo as there were 2 years ago? 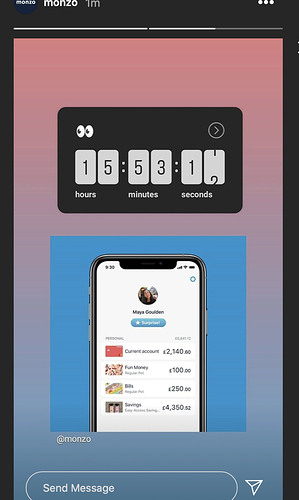 Monzo Plus announced. I’m taking personal credit for this for pushing Monzo to do this (clearly!) in response to my post…

Do we close this thread now?

I took that literally.