but they generated £162.3 million of their revenue from the UK alone!

162.3m out of 162.7m in revenue coming from the UK when Revolut are active in many, many countries is indicative of one of two things:

Knowing the kind of shady stuff Revolut has already been caught doing, I’d bet on 2.

@equalityforall - I’m not sure why you’re so upset and hung up about Monzo.

You can be happy for a company you clearly like - Revolut, without trying to attack others. Trying this hard is just showing how incredibly biased you are, and makes your opinion seem unreliable.

I’m going to pick away at a few of your comments, as they’re incredibly exaggerated or false.

monzo haven’t even mentioned when they will be break even, rather that they may not survive the next few months.

This is false. Monzo have not said a single word about that they may not survive. Especially a date. Do you have a source?

In fact, on their last report, they specifically said there is no cash flow concerns for at least the next 12 months. Which is all they need to write about in their annual report.

FCA over their financial crime controls

The FCA has also had squabbles with Revolut for the very same thing.

The only good thing that happened to monzo this year was removing tom as CEO, but that should have happened years ago

You know he’s now President right? He’s taken a step back from the regulatory side, of which Monzo does perfectly well, to focus on vision.

Revolut are riding waves from strength to strength while monzo seems to be completely wobbling on its last legs.

Come on, i mean really? What’s your basis for “wobbing on its last legs”. I think you know as well as I do, that they’ve recently raised tens of millions of pounds, and their financial report shows they’re healthy.

[…] This is false. Monzo have not said a single word about that they may not survive. Especially a date. Do you have a source? […]

I can even add that Monzo currently has capital of £175 million. Clearly enough to make the same losses next year as they did this year and still be around to tell the tale.

Monzo is also cost cutting, as Revolut are also doing, so should bring loses down and therefore many years at the least. Monzo are also possibly raising £40 million too in the next year.

Monzo as a going concern

In these media stories it seems to be a case of heads I win, tails you lose for Revolut

So Monzo is going to be stuffed by a virus-ravaged US that will at the very same time be key to a gravity defying Revolut that also ultimately earns most of its money from interchanges?

I wasn’t too far wrong on the weekend it seems

No more direct references to people’s relatives, please. If the posters could edit them to avoid that language that’d be great, otherwise those posts might be removed.

You know he’s now President right? He’s taken a step back from the regulatory side, of which Monzo does perfectly well, to focus on vision.

How are monzo doing well on the regulatory side if the FCA is investigating monzo over their financial crime controls?.

Revolut lost less money than Monzo while making nearly $100 million more in revenue than monzo last year. This pretty much sums up why monzo will be monz-who within a year.

How are monzo doing well on the regulatory side if the FCA is investigating monzo over their financial crime controls?.

You understand what an investigation is, right?

It’s the process of collecting information. It isn’t indicative of wrongdoing.

I am relatively new here (the community not Monzo) but I’m baffled as to why people keep comparing two such different UK entities - completely different business models.

I get why Monzo and Starling are compared, but why Revolut?

Or am I missing something and they are really a UK bank?!

Also, so much bias to both sides - why not interrogate companies’ performance evenhandedly?

It’s not really people in the plural though

It isn’t indicative of wrongdoing.

If anyone wants to learn more about this sort of thing, I think ITV are currently repeating The Lost Honour of Christopher Jefferies.

Many newspapers made the mistake of thinking that ‘under investigation’ meant 'clearly a wrong ‘un’ and, ugh. The results weren’t pretty for anyone involved

I believe I have read that the FCA/PRA have already carried out their review and Monzo are now left with having to address those issues.

Hence why the annual report mentions the potential cost as they now have an idea of what they are and how much it may cost to fix.

I cant seem to find anything other than this in the annual report about risk mitigations of financial crime .

Is this "investigation by the FCA " reported in the press referring anywhere to Monzo specifically being investigated by the FCA, or the May review of all banks systems and controls ? 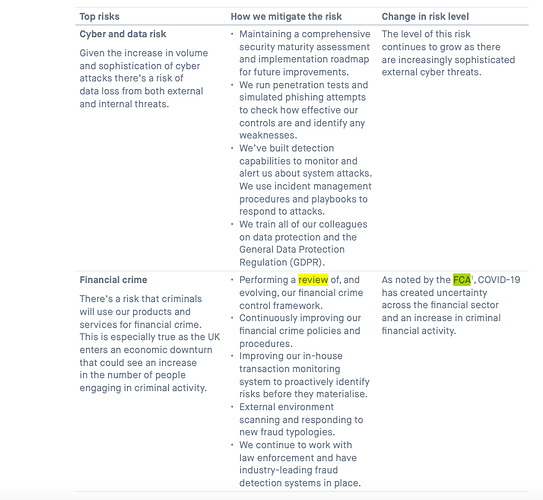 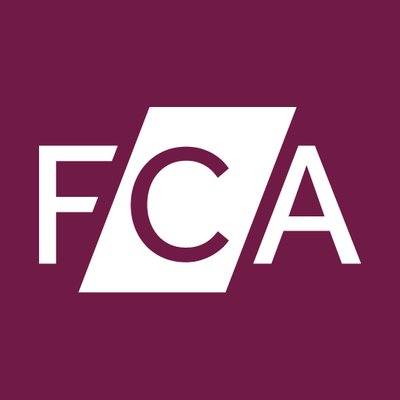 Discover our expectations on how firms should apply their systems and controls to combat and prevent financial crime during this crisis.

from a Times article
" The troubled digital bank, which issued a warning on Thursday over its ability to remain in business, began an investigation of its “financial crime control framework” in June after a review by the Financial Conduct Authority."

There does seem to be a certain ambiguity in the Times article of who is getting reviewed and when this was asked for specifically of Monzo by the FCA, maybe its just journalistic licence for a story …I dont know ?

I’m not sure where I read it. I don’t think it was The Times but having a quick look at the annual report, I believe it’s referred to by: 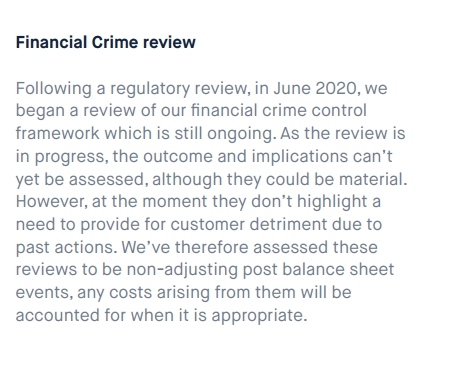 As such, its a matter(s) identified for Monzo
specifically to deal with by regulators.

No, things like this are not made generally made public by the FCA or PRA (part of the Bank of England) as they could affect investor/market confidence and alert bad actors as to where weaknesses may exist

The May FCA document you link to is not a review but basically a reminder to institutions what they should be doing anyway and that hasn’t changed due to Covid.

I agree there does appear to be some ambiguity in the press. I suspect they’re speculating a little.

To indulge in similar myself, a few thoughts…

Bottom right of page 147 of Monzo’s 2020 annual report says they’ve had a review from the FCA and are now looking at things themselves: 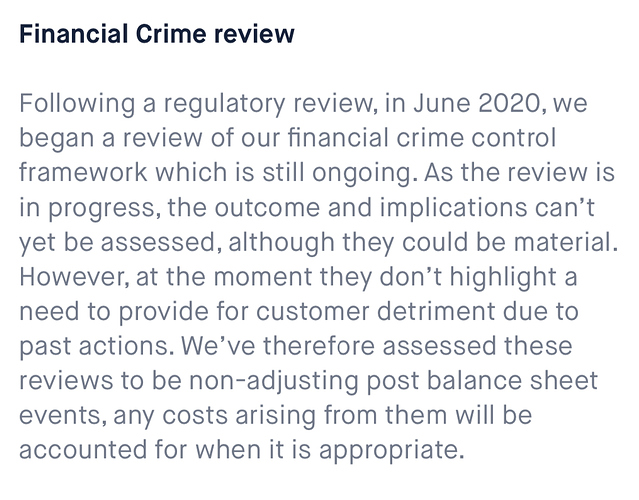 They say there won’t be any customer redress and, given this is financial crime related, one could assume that means potential regulatory fines. There had to be some potential cost for this disclosure to be needed.

I recently needed to have a DBS check for work - when I tried to use a Monzo bank statement as proof of identity and address, I wasn’t allowed to as they (the government agency responsible for criminal record checks) believed that you don’t have to provide proof of address to have a Monzo account. I can’t recall what I had to provide, it was ages ago!

Putting these things together, it looks like there could well have been failings in the financial crime controls in terms of Monzo’s KYC (know your client) processes. I do recall it was very easy to set up an account. Was it too easy?!

That can lead to big fines in some cases.

Let’s see how it goes… in any case it isn’t a great thing to see.

Losses at Revolut more than tripled to £106.5m in 2019 as the business continued to expand internationally and hired nearly 2,000 employees.

I always assumed that the need to receive and activate a card at the postal address associated with the account was what provided the proof of address. At the time I joined that seemed clever to me, and I wondered how they got round it with the current instant activation of Apple / Google Pay. Electoral roll perhaps?

I do recall it was very easy to set up an account. Was it too easy?!

Your interpretation of this part of the report isn’t a million miles away from mine. In my case, I worked like this:

I am aware of university campuses (and admittedly this is anecdotal, as I’m a bit too old to be near one now myself) where fraudesters try and trick naive students into becoming money mules, a trick which is much easier to pull if they can talk the target into installing the app on their phone right there and then, and potentially have the whole process done in minutes, as opposed to hours or days of grooming.

This might also be why recently we’ve seen more instances on the community of people with Cifas markers being turned down for Monzo accounts, when previously they were advised to “apply and see what happens” and were apparently successful (on the basis they didn’t come back and complain.

In any case, I should probably now sign out the same way here: