Monzo as a going concern

Perversely, a lot of the hype around Monzo’s possible failure is generated by their success and popularity. It makes good headlines.

Agreed. Monzo have been particularly shafted by the timing of coronavirus torpedoing their plus launch and growing loan book.

this hasn’t affected Starling or Revolut

b) revolut doesn’t have a UK banking licence

a) and c) are pure luck of timing, one having a negative effect and one having a positive effect. Neither is a result of particularly good or bad business decision making.

While you’re right in what you say, I think your post misses / obfuscates an important point - that the directors and the auditor have doubts about Monzo’s ability to continue as a going concern and have warned us all that there is a material uncertainty around this.

That is not normal.

But, of course, these are not normal times. 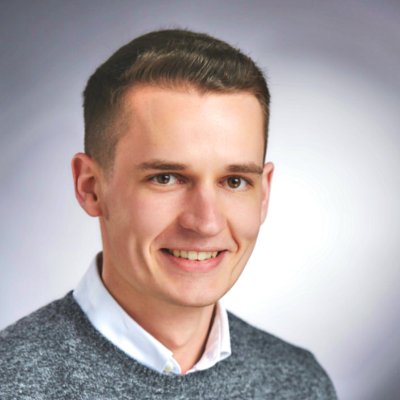 The ex-auditor in me has been waiting a long time to explain something like this... Monzo's annual report contained a paragraph in the audit report drawing attention to the "Basis of Preparation" note in the accounts - see below... #Monzo 1/thread https://t.co/5hiDB6pXa8 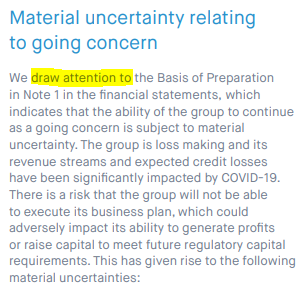 the directors and the auditor have doubts about Monzo’s ability to continue as a going concern and have warned us all that there is a material uncertainty around this.

That is not normal.

I said it before up in post #2, but I think it bears repeating. This Isn’t at all abnormal for new startups. 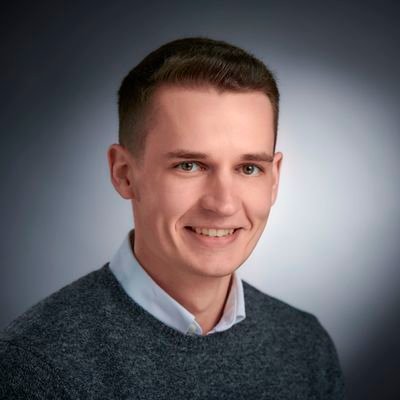 @RobertCollings_
The ex-auditor in me has been waiting a long time to explain something like this... Monzo's annual report contained a paragraph in the audit report drawing attention to the "Basis of Preparation" note in the accounts - see below... #Monzo 1/thread https://t.co/5hiDB6pXa8

It’s now my go-to response for these types of comments. There’s been enough “worry” caused in social circles, that it’s been handy to have available as being more than just “my opinion”!

I understand what you are saying but I’m not sure it is normal for banks to have such a disclosure around going concern.

I meant that to have a material uncertainty over going concern is not normal to see in public interest entity enhance audit reports (including those of banks).

Perhaps for start ups it is more normal. I couldn’t comment on that really. Happy to be educated on that.

Monzo did not have a similar warning last year, which indicates that the current situation has / will hit them hard and impacted this, rather than it being inherent because they’re a start up. Of course it will hit all banks hard, but the others don’t have this material uncertainty.

Without inside information on all fintechs and banks, we can’t really conclude on relative situation, although public reports are very useful to guide this - and they guide me to think Monzo is abnormal amongst banks. You may conclude they’re very normal amongst start-ups. We could both be right?

Apologies if my post was unclear around what I meant in terms of what is, or is not, “normal” with regard to going concern disclosures. I wanted to highlight what I thought was a bit of a misleading comment in the post mine replied to.

Sorry - replied to a second comment below as I didn’t see yours first!

I understand what you are saying but I’m not sure it is normal for banks to have such a disclosure around going concern. I meant that to have a material uncertainty over going concern is not normal to see in public interest entity enhance audit reports (including those of banks). Perhaps for start ups it is more normal. I couldn’t comment on that really. Happy to be educated on that. Monzo did not have a similar warning last year, which indicates that the current situation has / will hit them…

I’m really not trying to worry anyone - that would be inappropriate and unnecessary.

I think that the opposite - giving people false impressions of how positive things are - is just as unnecessary / not useful. So I was trying to call that out.

I’m sorry if I came across like I was trying to worry people. I had similar intentions as the ex-auditor chap who wrote the thread you linked to - to try to explain it a bit. As a current auditor, I agree with you guys that having the view of an auditor to reference is useful

I’ve been reading the community for years but only just joined and posted for the first time as I saw what I thought was a lot of misunderstanding about audit reports, annual reports, and IFRS 9 expected credit losses, and thought I might be able to help.

From the responses I’ve had, I’ve really failed to help!

As I posted above (or in another thread I have forgotten). If there was a serious issue with Monzo then the Bank of England would have made it well known.

In 2017, when the Co-op Bank almost ran out of cash, the Bank of England put the it under “intensive supervision” with contingency plans to ensure an “orderly failure” if it did not agree to a sale or a fresh capital injection. This has not happened to Monzo.

Aside from a Wirecard style auditor problem, it is hard for a bank to fail these days without the Bank of England having some form of early warning. Things have changed a lot since 2008.

The Co-op Bank was due to run out of money within months, Monzo has enough money to last at least the next 12 months whatever happens. Monzo has access to capital through its shareholders as seen from its last raise that you quote. It could also Crowdfund from its customers/public as it did in December 2018 when it raised £20 million in 3 hours.

It was 2017 when I left the Co-op Bank because I was unsure it would survive. I was wrong and I am wiser on how these things play out.

I’ve no doubt Monzo is in no immediate financial danger; the directors reported being able to continue for a minimum of 12 months. While I responded to your comment, I have no issue with what you said; apologies.

Why is Monzo struggling more than Revolut?

In these media stories it seems to be a case of heads I win, tails you lose for Revolut

So Monzo is going to be stuffed by a virus-ravaged US that will at the very same time be key to a gravity defying Revolut that also ultimately earns most of its money from interchanges?

Having 12 months worth of cash isn’t a guarantee of success, years ago I worked for a firm that has 18 months worth of reserves and it still sadly went into administration.

Monzo need to start making money, if you read the article in the times you can see capital funds are starting to get twitchy.

I’m not convinced at the moment that the new plus offering is going to be enough. Hopefully they can turn a corner and start to become profitable.

A bank has slightly more supervision than a Ltd or plc. The Bank of England ensures that individual banks have sufficient financial resources - in good times as well as bad. They scan the entire financial system as a whole for risks. The Bank also carries out “stress tests” which looks at a range of “what if” scenarios, among other things.

After all these the Bank of England has not put measures onto Monzo thus they must be satisfied that Monzo are a going concern.

However, I never said Monzo will be a future success. I cannot predict the future, just that there is nothing to worry about right now and I believe in their ability to raise money for the next year or two. I do agree they do need to go towards profitability and that is the aim of Monzo I believe from reading the report.

I don’t doubt they are under closer supervision but equally I would imagine if there was one whiff of any measures, people would pull their money out pretty sharpish, resulting in a hastened demise.

Nobody has a crystal ball on this, I’m simply saying that the bank does need to turn a corner regarding profitability.

Obviously and undoubtedly COVID 19 has impacted their profitability but equally, they are a bank without branches, so in many respects they are potentially less impacted than legacy banks, plus I would guess their operating costs are lower too.

I know the press like to talk but in the times article when you have people saying it’s failure is inevitable, it doesn’t entirely inspire confidence. And they talk about a lack of ability to get further investment. Now I have no idea if that’s true or not and I hope it’s not true.

my go-to response for these types of comments

You’ve both referred to this Twitter thread as an authority on how auditors look at going concern, but I’ve had a look and the chap who wrote it has just 5 years of experience as an auditor and worked for a firm which doesn’t appear to audit any banks (or any I’ve heard of anyway - looking at their 2019 audit transparency report list of public interest entities audited). He clearly has a very strong interest in it though and also a very strong like for the tech sector - I don’t want to do him down at all - but thought I’d mention.

Aware this might look really stupid and/or arrogant, but I think the thread lacks some useful detail. I have a lot more (and more recent) experience auditing banks and lenders than the Twitter threader appears to and I’d be happy to try to explain why / add some detail if anyone here would find it useful.

As I said before, I only began to post on here to try to add some useful detail on the accounting and auditing side - and I’m certainly no oracle!! - but it doesn’t appear to be particularly popular. I’m keen that Monzo are a going concern, having been “full Monzo” for years other than savings & investments elsewhere.

I’m sorry if this comes across poorly. Aware written word lacks tone and can do sometimes. My intentions are polite and honourable.

My intentions are polite and honourable.

Which is more than can be said for some. To be clear, I never thought otherwise.

Most of us don’t have any particular financial expertise, and so seek it out where we can find it. Thanks for providing some cogent, thoughtful comments