So I use my middle name as my preferred name as I really dislike my first name. As a result very few people actually know my first name.

Monzo’s preferred name is great, which means the app and my bank card have my middle name on it.

However when I send money to someone via bank transfer, the name the receiving person gets is my first name.

Was wondering if there’s anyway of changing this? It causes confusion and an awkward conversation.

There’s nothing you can do about it I’m afraid

Mentioned in the comments of the above topic the way to resolve this would be to change your name by deed poll which is apparently dead simple to do.

All banks are starting to implement stricter rules on what name appears when sending money to clamp down on fraud - so it’s only going to become more difficult for you.

I second a vote for deed poll. I changed my legal name and it really is very simple and relatively inexpensive to do - the real hassle and cost comes from changing your legal documents (passport, driving licence etc).

If only you’d quoted a bit further:

That isn’t what it says but is a fair point.

I looked it up because it wasn’t free when I did it, and I was curious to see if it had changed. From: https://www.gov.uk/change-name-deed-poll 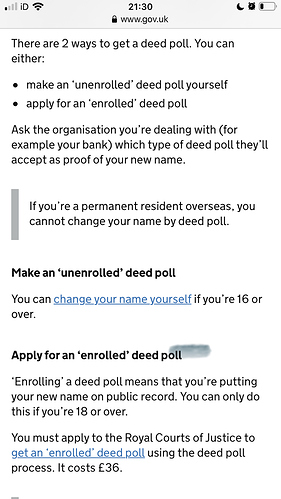 It is free. Enrolling just means you want a public record of it. No institution (including the passport office) requires an enrolled deed poll.

I’ve changed my name! My birth name was Maja but didn’t enjoy it so it’s now Becky - it was free. Only cost was a new provisional license and new passport.
My local council tried to charge me to change the name over for the rent as I live in a council house so they wanted a £17.99 admin fee (I know I’m cheap but £18 is a lot to me that’s 3-4 days food) but I argueed and they didn’t charge me

I had a friend who wanted to change their name recently but they were worried about all the hassle. It’s worth noting you don’t really need to update it everywhere instantly - you’re allowed to use any name you choose so long as you aren’t doing anything illegal (such as fraud).
I changed my passport and bank accounts straight away but didn’t update my driving license as I never used it. (This was 15 years ago when I was new to London so it felt like a good time to make it official).

I have the same issue as Alex. I have raised this with Monzo and have been disappointed by their response. They say they have to display the full legal name (i.e. ID name) but as I have pointed out they do not in fact display the full legal name, but their version of the full legal name, i.e. first forename and surname. That is the company’s choice and since other banks do things differently I do not accept that nothing can be done about it. It can be changed if Monzo are willing to take the issue seriously. I don’t want to change my name, I just want banks to allow customers to decide which of their ‘legal’ forenames to use … or indeed to revert to the practice of using initials, as banks always used to do.

other banks do things differently

I’m curious about this, can you say which banks do it differently and what they do? I’m surprised they can do anything differently given that the rules around checking the name on account should be under Confirmation of Payee, which should be the same for all banks.

You now need to know someone’s name if you are going to pay them, just like asking someone who to make a cheque payable to. For individuals this will be their first name and last name

The link is very interesting. It shows why all banks have to be consistent in terms of the search on the name when you want to pay someone. But that’s different from the specific point raised in this thread, which is how my name appears on the recipient’s statement. Just looking into recent payments into my account (not Monzo), they include names in the form A Smith, AB Smith, Smith Andrew B, Smith A, Smith Andrew … but and the only one in the form Andrew Smith is from a Monzo account (mine). So clearly different practices are possible in this respect

What would be the reason(s) someone doesn’t want to show their name?

None of these solve your problem though? Even if it’s ‘A Smith’, that’s still an A and not a B or whatever name it is you prefer. Unless you are lucky enough they start with the same letter.

Seems like none these are what you are asking for which is for a different name to be sent other than your first and last name?

Ahh ok thanks for that. Your first comment covers what was going to be my follow-up question

I guess you’d need to change the name on all the accounts you’re paying money too as well to avoid complications. HRMC, Gas and electric etc. Or maybe they only care that they’re paid and not who by

I guess you’d need to change the name on all the accounts you’re paying money too as well to avoid complications. HRMC, Gas and electric etc. Or maybe they only care that they’re paid and not who by

At least when you apply for new things, file a new tax return, get a new passport etc you need to change it. You can’t just carry on with two different legal names.

AB Smith, however, is perfect from my point of view; Andrew B Smith lesss good but it at least knowledges my second forename. And my point is that the variety of practices that exist suggest that banks are not obliged to follow the Andrew Smith model