I also have this problem with my main TSB account so we’re not alone, when I fill up at the shell garage near me it comes up as a completely different name and throws my categories out of place

. At least with monzo you can change it which is great! I’m not sure if it’s down to Monzo or the card machine system?

A little off topic but like to share experiences - I know somebody who flies all over the world selling petrol pump contracts, he knows about oil refinery to a very high level. As a car kinda guy I only ever use Shell V-Power in my S3 and since talking to him I was right to do so, he advised to avoid all supermarket fuels whenever possible as the quality is that poor, regardless of RON value, it’s about the additional minerals being added that is important for your motor, diesels especially!

he advised to avoid all supermarket fuels whenever possible as the quality is that poor, regardless of RON value, it’s about the additional minerals being added that is important for your motor,

This concurs with my experience. I used to have a car which would rattle when filled with supermarket fuel, but was fine with any other.

In contrast I use Supermarket Fuel 95% of the time and have never had any issues with any of the cars I’ve owned/driven and definitely never used ‘Premium’ fuels like Super+ Unleaded, etc

I agree. I have a car that is responsive with premium BP and Shell fuel but has lag with supermarket fuel despite the RON value.

Yet our other car (a Toyota) runs on pretty much any RON from BP, Shell or supermarket OK.

A further example, I’ve finally settled on Monzo being the place I want to be after running the 2 in tandem for about a year (Monzo first, then added Starling). Anyway, I’ve got a few Goals setup (cough Custom Images cough) and in particular I have one for Fuel:

At the moment, I move this across manually but obviously I want to take advantage of the IFTTT integrations that are available to me. Unfortunately however, because I pretty much fill-up exclusively at Supermarket Filling Stations I’m basically not going to be able to take advantage of it at all

. It’s literally only when I allow myself to be so short of fuel that I have to get ripped off at the local Shell garage.

If you use Pay at Pump, it will now always be categorised as Transport. We even threw in a little emoji in the notification: 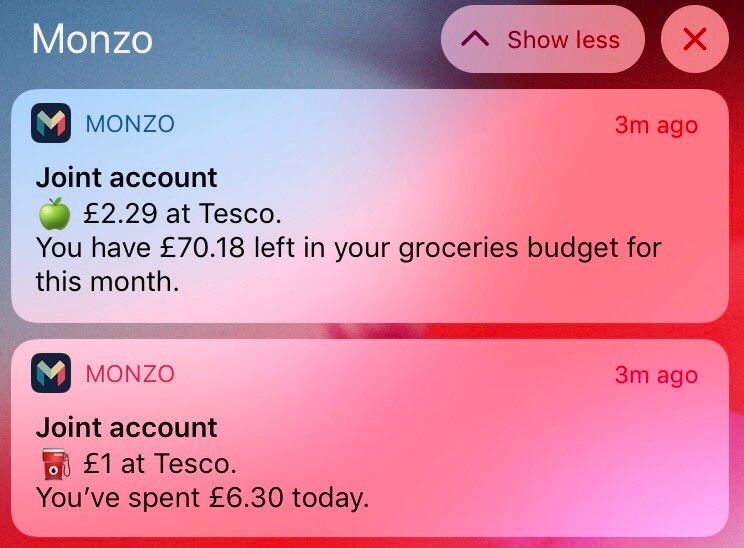 This works because, as pointed out above, there’s a specific Merchant Category Code (MCC) for Pay at Pump. We’ve set this up to override the merchant’s emoji and category (in this case Tesco, which is normally Groceries).

Thanks @tjvr really pleased this change has been made. Appreciated!

Glad to hear it! My wife and I drive a lot, and live very near a Tesco petrol station, so I’ve been wanting to do this for a while… was a pain re-categorising all the Tesco transactions as Groceries/Transport every time

This seems like a small change on the surface but it’s going to help potentially millions budget efficiently with minimal effort. Well Done!

Can you categorise all the past transactions as well or will it be only for future ones?

I never even realised I could use my Monzo card for pay at pump! Going back to the old pre-pay card that wouldn’t work, I just assumed the new ones wouldn’t either

I have a Natwest account and can’t use that card for pay at pump either so thought the Monzo one would be the same as it was when my account was pre-pay because I wasn’t told any differently. Good to know

(not that I doubted it would

Just been to Morrisons, notification had a petrol pump and the category was set to transport

Just grabbing a bite to eat now from the store itself, will check that it’s still got the right category

I’m sure it will haha

Thanks for the amazing work here!

I’ve just opened my Monzo account and begun testing, having previously tested Starling and gave up. The reason was that while I rated the categorisation and subsequent spending analysis the killer feature it just wasn’t flexible enough.

Today I purchased petrol at Morrisons and it shows on my account as groceries. From reading this thread I understand that if using PATP it will be categorised as “Transport” Not sure it if the transaction will show as “Morrisons Petrol” though. Can’t test that yet as still waiting on my card to arrive. (used Apple Pay)

Now looking back at my Starling data I see that a fuel purchase at the same outlet correctly shows as “Morrisions Petrol” and I know for sure I paid at the kiosk as the transaction details say I used Apple Pay.

Before I read this, I had used the “Improve Name…” feature in the Monzo app to suggest “Morrisons Petrol” which shows up in a search and at the correct location. (A previous suggestion I made for a local merchant has been swiftly implemeted, impressed with that.) Now I’m not so sure this will result in an update but cannot see why the two cannot be distinguished if Starling can do it. Anyone able to advise?

This doesn’t work if you pay in the kiosk sadly

(maybe one day?) but it definitely does when you stick your card into the pump before you start fuelling

Does it show as “Morrisions Petrol” or simply categorise the transaction as Transport?
Have I wasted my time with the mertchant update suggestion?

I do pay at pump and it is still incorrectly labelled. The category is wrong.