So how long has this been a thing and how many users benefit? 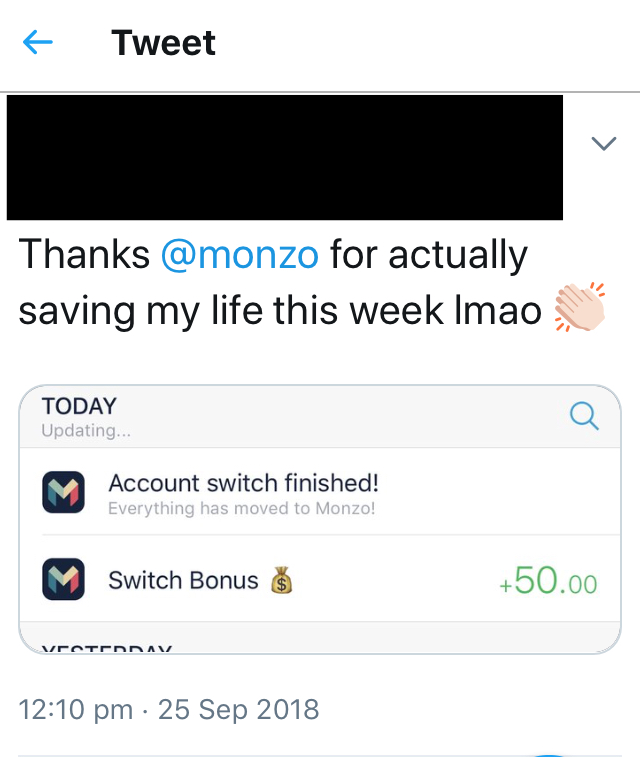 Who would of thought it I didn’t even know this was a thing I have some accounts that I don’t even use anymore and just feel to switch them over just to close and see if I get the bonus.

Yeah I saw this on Twitter the other day. I switched fully over last week but didn’t receive anything

Is that real? I’ve never seen or heard anything about it… I have my suspicions.

Maybe, but it’s never been mentioned as ‘a thing’ which would surprise me.

Is that real? I’ve never seen or heard anything about it… I have my suspicions.

Monzo replied to it on Twitter in an official manner, so yes.

I think I share the views of a few other members here; Monzo previously said they didn’t need to offer these types of incentive to switch and this (Switching Bonus) along with the Paid Referrals has left a bit of a bad taste.

So it’s this official? As in, everyone will get this if they switch?

So it’s this official?

No, nothing has been said.

As in, everyone will get this if they switch?

Who knows, part of the problem is there’s been no official communication on it really, best guesses are that they’re doing A/B testing and seeing what results they get before a full roll out

It’s probably just an experiment so I wouldn’t read into it too much right now, Monzo runs loads of experiments.

It might stick around, it might get culled. I guess it depends whether Monzo see any positive impact.

Is such a major incentive fair when only a few get it and others don’t who have switched at exactly the same time? £5 referral bonus is one thing but that was clearly communicated to the forum

If this is real, it hardly seems fair to those that have been with Monzo for months or even years.

Thanks @monzo for actually saving my life this week lmao 👏🏻 https://t.co/hTKw8UiRfg

@BBCPARLlAMENT We hope you get to buy something nice with it! 💰

and Why it’s not been openly announced… It’s OK if you want to go this route but at least be open about it.

Fairness, transparency… All words that Monzo claim to represent.

I don’t think its fair.

I feel very strongly that this is completely unfair if it is not available to everyone. Why should some people automatically be gifted with £50 and others not? For some people that is a huge sum of money. It is especially annoying when you spend time trying to get people to sign up and putting the hard graft in with your friends, only to find other people not having to do anything and it being incentivised.

I switched recently and made a jokey comment about how I would probably miss out on a switching bonus, and someone responded saying that wouldn’t happen. Well it has…

My partner has a current account but no option to get £50 for switching, and I know for a fact that he would switch if that option was there. Is it all completely random?! He is now going to hold off switching because it looks as though at some point people will get money for doing it.