It would be interesting to know if there was a spike in sign ups at all.

As @simonb said, it wasn’t a great use of money (cost to sign up ratio), but that doesn’t mean there wasn’t an increase in sign ups (I don’t know the answer here).

We actually found that it wasn’t a particularly good use of money. It didn’t convert into a great deal of new signups compared to what it cost. It was fun though

There really wasn’t, the graph remained quite constant from what I remember.

I think IRL adverts for banks are generally tuned out by the majority of people.

You need to give people compelling reasons to switch, and then they will - so that’s why something like “Monzo With Friends” and Golden Tickets drove insane growth for us. It’s all down to FOMO - if all your friends are using something, then you will too!
And you’ll hopefully be impressed enough with the service to then start recommending it to your friends. 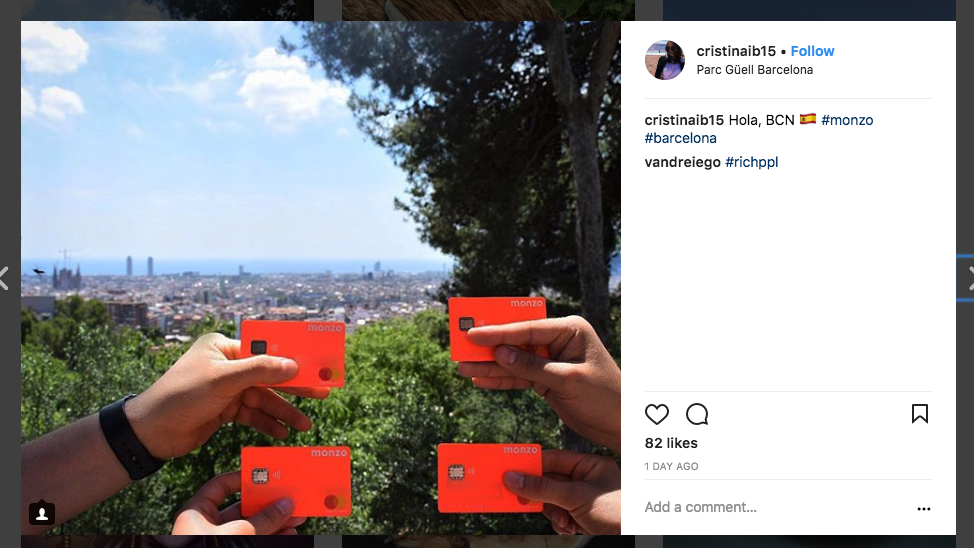 Money can’t buy that kind of personal recommendation to your peer group!

That looks like an advert for different levels of card security

Whose the bravest of the bunch!?

But yeah, people do just love it!

If Monzo ever do make a TV advert I really hope the theme won’t be ‘Person looking at a smartphone’.

The other day I was watching TV (admittedly a sub-prime channel) and there were five adverts in a row of people looking at their smartphone.

Glanced up on my commute this morning and… 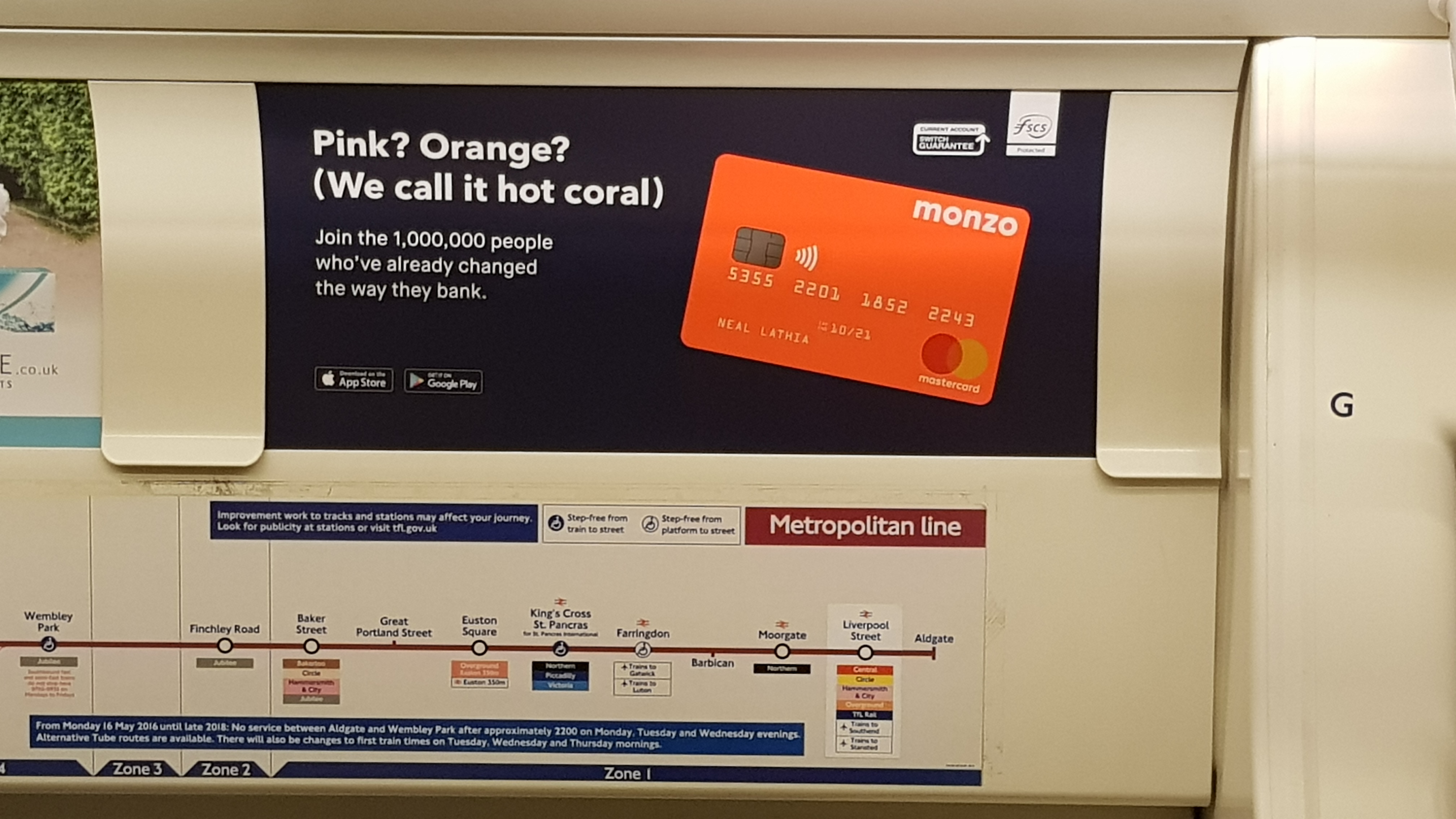 So my 2p worth is… How do you track the performance of this campaign without anything trackable in the ad? Whether it’s great or not, how will you measure it?

Vistaprint are extremely good with their marketing analytics. If you’ve ever ordered 1000 business cards (that you’ll never use) because there was some great offer to take advantage of, chances are you’ll have told them exactly where you were sold to because you entered “TV27” at the checkout to get 50% off the already-inflated-by-50% price, which tells them you decided to buy while watching Jeremy Kyle at 7am on a Monday.

They can compile all that data and decide what works the best and how to proceed from there.

Don’t get me wrong, this is a cool ad

and it will generate signups, but without any journey tracking how will you measure the success?

I’m going to be super cynical… so… warning.

It’s an advert. With no way of actually signing up. No call to action. In London. Which, I assume, is Monzo’s biggest market. Very few people I know haven’t at least heard of Monzo in London - it’s very common to have one.

I think it’s great that adverts are coming out, but would they be best served in areas less common to Monzo? At least a website!

I’d be interested to know what the thought is around marketing in London, or indeed what percentage of people that use a Monzo account, are already London based.

Living outside of London myself, without doing much research, it feels like most people haven’t even heard of Monzo, so I would have thought it would yield better results - That being said, in terms of reaching a load of people for the least cost/effort - The tube is probably up there as the best strategy.

As for the website thing… It wouldn’t hurt to have it, but everything is done through the app.

So making it obvious you need to download the app, and not go to a website to sign up (which most people would be used to with banking), makes sense to me.

We’re gonna be trialling a few things I believe. In and out of London.

(I’ve no idea on the measuring of metrics, not my area)

So making it obvious you need to download the app, and not go to a website to sign up (which most people would be used to with banking), makes sense to me.

Either way, my earlier point was really grappling at the call to action needed. Whether that be website or app. Even “Search Monzo to sign up” would do.

I assume the lack of call to action is likely deliberate…

Well I would assume too - just don’t… like it haha.

To answer some of these early questions quickly…

How do we measure success?

It is tricky! But we’ll be looking at things like how many people sign up during the period when the ads are up vs the norm. There’s also a bit of this which is about general ‘brand awareness’. Sometimes it seems like everyone in London has a Monzo card (if only

), but that’s definitely not the case.

In terms of using a code to track people, it’s just another layer folks have to go through before they get an account. That extra friction doesn’t seem worth it to us. We might feel differently in future though!

Why no web URL/call to action?

We did some testing of this, and found that pretty much everyone’s next step would be to Google Monzo, or head straight to the app stores. We’d rather people just download the app, of course, and having the address on the ad would just be another element that we could do without. (Again, we might feel differently in future if these ads entirely fail…)

On the call to action point, this is actually 1 of 3 ads we’re running, and they’re not all running in London… so keep an eye out for the other two

On the call to action point, this is actually 1 of 3 ads we’re running, and they’re not all running in London… so keep an eye out for the other two

Haven’t seen any in Edinburgh… but if you do…Transport for Edinburgh (Lothian Buses/Edinburgh Trams) is where you do it.

He’s an employee (I think). It’s a real person according to slack, volunteered his name

I think this is clever and I like it.

There’s no need for a url or url/TUBE for tracking, I usually judge those ads negatively — they don’t care about the users as much as selling their discounted product, trial etc. Understanding that people will simply Google it treats people with a bit more dignity and intelligence.

No gimmicks. Awareness is good.

I think the lack of CTA URL is fine, most people just type a word into the search bar in their browser these days and go to the first thing that comes up, or because its got the App Store logos they’ll end up there. Personally, I much prefer a URL but that’s just because I’m an old-timer on the internet and like to go direct to a website - one thing that grinds my gears are ads which say ‘Search for…’ and give you something to google, rather than just trusting us to remember a domain name.

Nice to see advertising, I’ve mentioned Monzo to some people who aren’t keen because they’ve just never seen it advertised anywhere but after seeing these, they’ll know it’s legit.