I’ve reporter the same issue via Twitter. They opened an internal ticket for that. Hopefully will be fixed soon

I think the Payments tab can be utilised here. With both the Pay and Request screens used.

Thoughts? It would the logical place to keep track of these, surely?

We have a local takeaway that only takes cash and as we’re all Monzo users it would still be useful to throw IOUs round to everybody to transfer the money to me.

There’s no reason you can’t generate a monzo.me £5 for the takeaway link, and send it to them. Those get picked up by the monzo app and just become monzo-to-monzo transfers.

Yep and that’s what I do but it doesn’t give me the ability to track who had paid back like the new functionality provides.

Being able to correct them manually would be the fundamental step towards that, and then any automatic assignment on top would be icing.

I’m after a single “off Monzo” transaction that will result in a lot of Monzo people owing me money, being able to go through this new bill splitting feature so I can keep track of who owes what and if they’ve paid or not.

Bill splitting but being able to trigger it with an arbitrary value rather than a specific transaction.

Is it possible to split a bill that’s not a Monzo bill?

We have a local takeaway that only takes cash and as we’re all Monzo users it would still be useful to throw IOUs round to everybody to transfer the money to me.

Is this the sort of thing you’re thinking of?

I am often lending out small amounts of money to friends, family or my girlfriend. Keeping track of their repayments and any debts I usually do through notes on my phone. It would be really helpful if I could handle this within Monzo. Idea When you send money to a contact you can mark it as a loan. There is a field to enter any terms. There is a repayment field in which you specify amounts to be repaid and dates to be repaid. Once they make a repayment it is deducted automatically from the lo…

Could another way around this be the ability to “split” an atm transaction.

That’s a little over kill really for what I’m after, I’d expect to be paid back by everybody by the time the next meal time rolls around. The bill splitting functionality above is pretty much all I’m after. 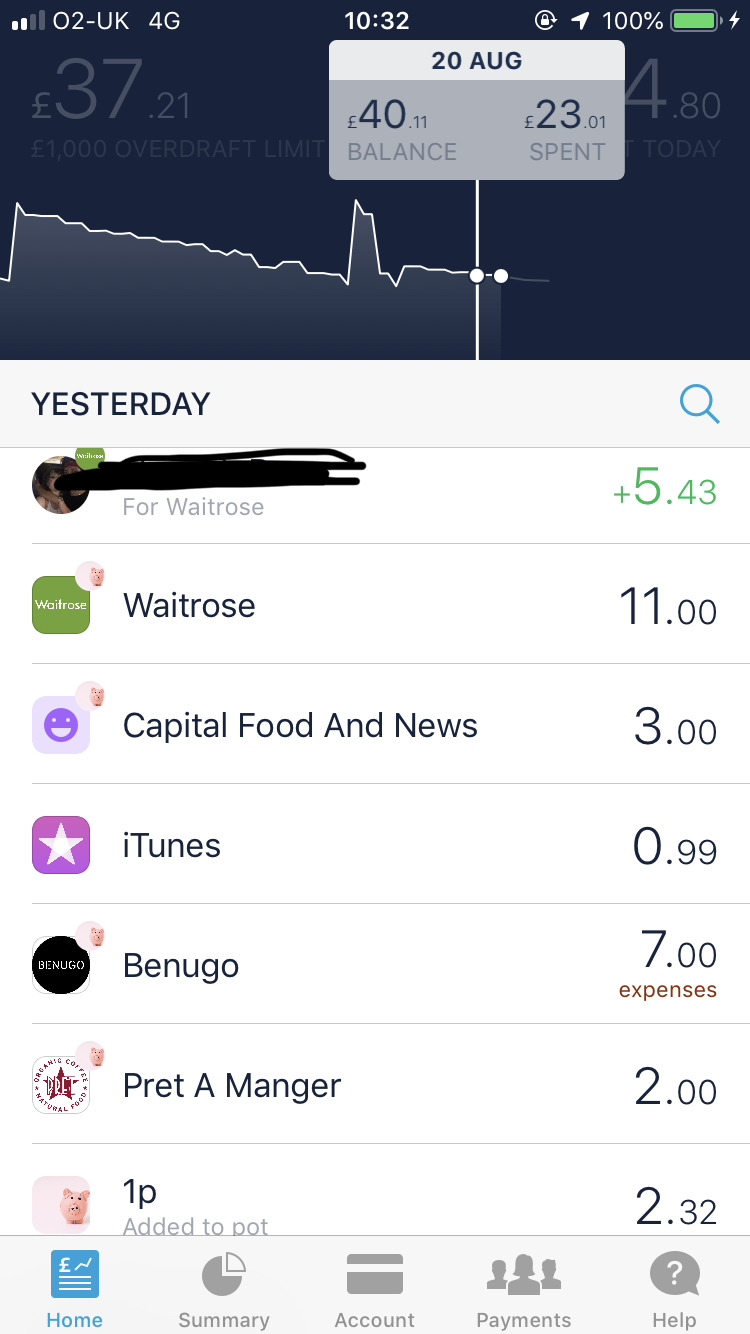 Hi, serious apologies if already raised above but I don’t think I saw it.

Bill splitting is absolutely amazing and it has already made paying for things with SO and friends soooo much easier.

But, up until now, whenever you received money on the day your ‘X spent today’ figure at the top of pulse/feed would not go down. Now with bill splitting implemented, surely this figure could now properly reflect what is spent today by minus-ing the money received back?

Monzo anything that can be done here? Would be great for spent today to update and actually be correct.

I’m hoping the new payee management features announced in the Big List Update are part of the steps towards mon-monzo account integration with bill splitting.

For joint accounts: it would be good to be able to split a joint account transaction with your own Monzo account. ie. pay for something on joint account, then split that bill with yourself and partner.

I like the idea of using bill splitting with other monzo users through the request and receive facility as previous to this I would send monzo me links to other monzo users and they would have to manually send it through me being a contact on their monzo app.

However much like many other people on this thread feel that non monzo users should still be able have a split transaction with.

This is really easy to rectify all you have to do is when you split a bill, say £2 each for 5 people, all you need is under the add people button is the facility to send a £2 monzo me link that’s automatically filled in with the details of the transaction.

When using bill splitting and adding a Monzo user, it didn’t show the contact I needed because the phone number in the contact was in +44 format. When I added the 07… format number to the contact I could then see it in Monzo when splitting a bill.

I seem to be running into a bug when trying to split bank transfers which is causing the app to crash:

Just came to see if this had been reported. Tried it three times and crashed each time. Reverted to Monzo.me for the moment.

Hi all, thanks so much for the great feedback so far. To give you an update, we are considering how to make this work with non-monzo users right now. Without giving any guarantees about whether and when it will make it into the wider release, we have some designs and engineering work in place to make progress. Getting this to work smoothly from Monzo to Monzo is definitely our priority as the experience that’s possible to achieve is vastly superior, but it’s understandable to want an escape hatch when someone isn’t on Monzo and you’d still like to send a request as part of a bill split.

In response to the two bugs I’ve seen reported:

For actual spending budgeting I’d recommend using “Summary” for now as the total spending value is correct on that screen.

Does this include the Summary circle as well? I’ve had this issue where people pay me back for things, and although the ‘left to spend’ figure is correct, the circle is all over the place as it thinks I’ve spent more than I have.

I think a good interim would be able to select a payment that has already come in & associate it with a bill split!