I’m looking to transfer my Oaknorth ISA out to another provider, but for the ISA transfer form I need to provide the account number and sort code. I can only find the account details in relation to my current account. Does anyone know where to find this information?

Searched help for transfer ISA and came up with this 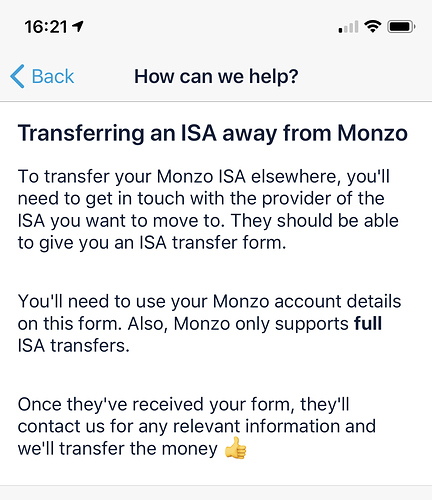 Thank you. Yes I have the transfer form. What I need are the specific account details for the ISA. I have the account number and sort code for my current account but Virgin Money have told me they are incorrect.

Have you given Oaknorth or Monzo as your ISA provider on the form ? We obviously dont know any account details/ numbers of the accounts that Monzo puts your ISA money in as far as I am aware, so presumably you have put Oaknorth as the provider and your Monzo account details . logically its Monzo that is providing the ISA through a group account provided by a third party (Oaknorth) …so the Monzo sort code won’t relate to Oaknorth name on the Virgin form …maybe Ive go the wrong end of the stick…but it does say …

" they (Virgin) will contact us (Monzo) for any relevant information "

I think I gave Oaknorth but Monzo account details. Just got a letter from Virgin saying that account is closed?

I would try Monzo Bank, as the ISA provider or ISA details, however its described, with Monzo bank address if required - found in the app …Monzo, sort code …and your Monzo account number

If that’s the case, no wonder customers and Monzo staff alike struggle to get to grips with the process

@Tomvaughan, did you not receive a confirmation of your ISA opening from Monzo or the ISA provider?

not sure Monzo staff are struggling, what has given you cause to think this ? , its pretty clear instructions to me in the app that @Dunsford shared ? isnt it ?

As far as I know , and Im only going on my savings pots , …you give your money to Monzo who then deal with the details , I don’t know my account numbers with my savings pots , other than Monzo details , so would assume its the same for ISAs - I seem to recall Monzo are regulated as ISA providers / facilitators in their licence

edit - Ah yes sorry @Demmedelusive I was linking your Monzo staff having problems to this particular thread subject , rather than the past email for closing down ISA thread as you did

Yes, it’s a savings pot with ISA status. To answer the previous question, I had no additional confirmation from either Oaknorth or Monzo on opening the ISA, other than the details in the app. I have already given Virgin my current account details from the app which they have told me is incorrect. If Monzo could clarify this somewhere that would be hugely helpful.

I think I gave Oaknorth but Monzo account details. Just got a letter from Virgin saying that account is closed?

I can only guess at what you put on the form , what Virgin said about the form being wrong etc etc , to me it seems pretty clear the details needed on the Isa transfer as indicated from the help section in app on Monzo but -

you would need to ask in app chat , please let us know the result

When it comes to ISAs, Monzo have a history of making things more difficult than they need to be.

The advice to put a current account number on an ISA transfer form is odd, and not something I’ve ever seen before. I can see how the receiving bank wouldn’t agree with advice from Monzo to fill out the form in such a non-standard way

Ive always put an account number on my ISA transfer form , otherwise how do they know which account it is to come from , Ive also put a sort code ? the advice in app says account number, I have one account number for my CA , and my two savings pots - its the same number

I understand Monzo customers are not currently given specific account numbers for their savings accounts. But this is a choice Monzo have decided to make and a consequence of this choice is this issue.

Yes, it’s a savings pot with ISA status. To answer the previous question, I had no additional confirmation from either Oaknorth or Monzo on opening the ISA, other than the details in the app. I have already given Virgin my current account details from the app which they have told me is incorrect. If Monzo could clarify this somewhere that would be hugely helpful.

As a practical solution I would suggest trying to send the transfer form to Virgin Money again using your Monzo current account number and accompanying it with a cover letter with a screenshot or link to Monzo’s advice.

I suspect Virgin Money’s first line customer service staff are going to tell you using a current account number is inappropriate, but the people who process the ISA transfer forms might process it if you accompany it with a cover letter. The first time you sent it in they might have thought you had put a current account number by accident so rejected the form. So a cover letter explaining Monzo’s advice might help.

I need to do the same thing today so would be interested in your outcome. I haven’t seen anyone say they have contacted monzo via chat so I’ll do that now. 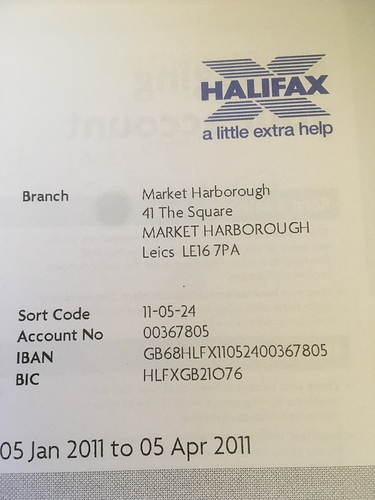 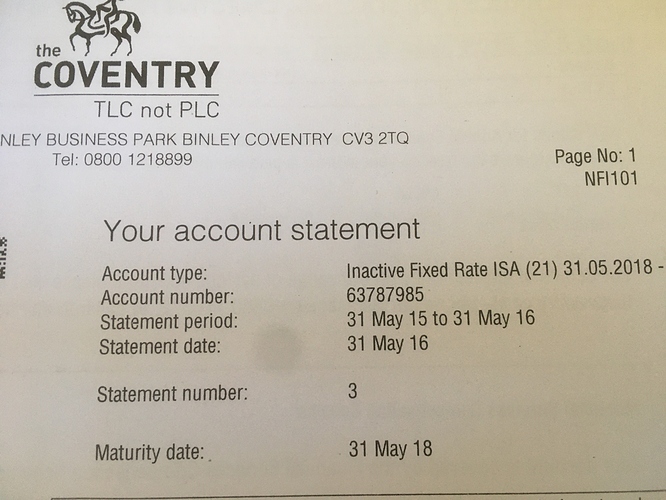 I presume those are account numbers specific to your ISAs (not for current accounts you have with those banks). It would be entirely suitable to use those number on ISA transfer forms.

with Monzo you have one account number to choose , you have no other number

Are they the only accounts you have with those banks/building socs?
If yes, then sure you would only have one account number with them.

With Halifax …no , Coventry yes , when I transferred them I gave that account number - we are talking about the information you need to give to transfer and ISA held in Monzo to another provider …with Monzo you have one account number …thats it,