Does Monzo take you into an unarranged overdraft or not?

Just looking at the wording of the “learn about overdrafts” section; it is confusing as it seems to say that, if I try to make a payment when I have a zero balance, I will both not be able to make the payment and go into an unarranged overdraft.

Obviously both statements cannot be true - which is it? Does Monzo take you into an unarranged overdraft or does it refuse the payment? 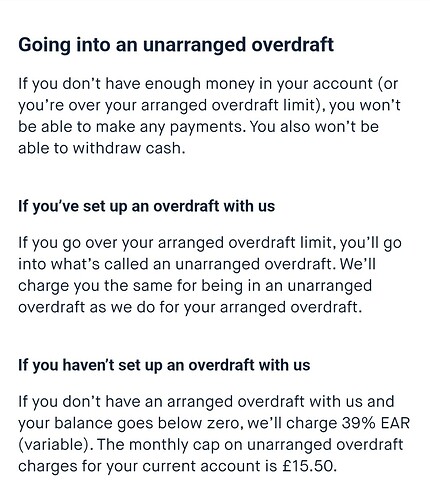 Offline transactions such as pay at pump fuel, plane in air purchases, transport for London etc only verify the card is active in some instances.

This means they will attempt to take the full payment amount a few days later (sometimes taking a smaller amount of 10p/£1 initially) to check the card is active.

If you don’t have the funds in your account to cover the full journey or fuel or in flight purchase, as you’ve already authorised the payment to be taken, these can put you into an unarranged overdraft, causing overdraft fees as noted above.

It’s not possible to put yourself in an unarranged overdraft ie you clearly have no funds available to buy something in a shop, it will decline the payment unless you have an overdraft of course. This is because the payment system can check the funds are there and accept the payment.

such as pay at pump fuel

Is this an offline transaction though? Also, with the whole now pre-authing £99 thing… wasn’t that mostl brought in to stop unarranged overdrafts?

That’s merchant dependent and not managed by the banks. Some work this way and others are working towards this way, but some still do £1 up front and charge the rest the next day.

Long story part of what Carl explained and also other things like delay payments like Tfl or Scotrail, Firstbus grouping transactions charging 10p and finalising the full amount a day later.

I would awash recommend if you ever know you’ve spent money and have more than you usually do put that extra money to the side just in case something does pop back up you’ll always have the money to put towards clearing your UOD.

Got it, thanks Carl for the clear explanation! So there are marginal cases which may still result in an unarranged overdraft, even if Monzo declines “online” transactions.

I think the wording there in the app should be improved to explain that clearly.