Clearer indication of difference between authorisation and payment

I ordered something from Amazon to the wrong address by accident, so I immediately cancelled the order. Amazon put an authorisation on my Monzo account for £99 when I made the order, and then didn’t take the money (since the order was cancelled).
Amazon’s cancellation email just said “you’ll only be charged for items that have been dispatched. You won’t be charged for any items that are cancelled from an order”.
But in the Monzo app it looks exactly like they charged me £99. So I’ve been contacting Amazon asking for a refund. That’s been frustrating! They’ve only just managed to explain that the “payment” isn’t a payment and that it’s Monzo’s responsibility to get rid of the authorisation when they see fit.
Meanwhile that £99 has been unavailable to me for a week.
Now that I know what the problem is, I’ve been able to figure out that Monzo will reverse unclaimed authorisations in 8 days, so the situation will resolve itself tomorrow hopefully.

Adding some kind of indicator in the Monzo app that a transaction is only an authorisation, and then notifying (or at least indicating) when the vendor takes the money, would be very useful to try and make sense of this kind of thing. Turns out that if you click all the way through to “something wrong with this transaction?” it explains the situation, but I had assumed the “something wrong” was on the Amazon side so I hadn’t looked there.

Good point ^^ The fact that a charge is still pending is shown in the detail screen but in the small print at the bottom. It seems reasonable that this could be made a bigger deal of. 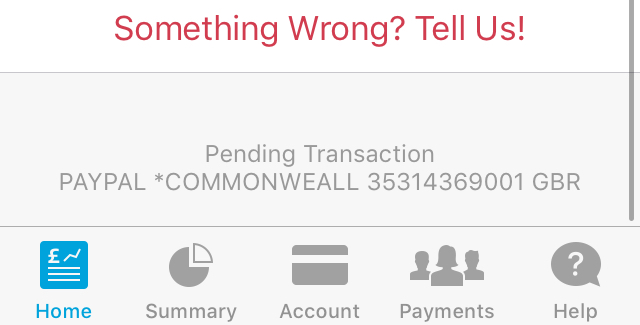 Yeah, that message is not only well hidden but doesn’t explain the situation accurately to anyone not familiar with bank jargon. “Pending Transaction” suggests to me that the payment is a done deal and just hasn’t made its way through the mysteries of the banking system yet. But in this case the payment is NOT a done deal and that’s the point, I’ll get my money back in eight days (important fact!), and that’s in Monzo’s control (also important to save me wasting time bothering the vendor about it).

I guess I feel like chunks of my money disappearing for over a week feels quite important to me in my mind, more important than the small grey font of that message would suggest!

This is the only flaw I’ve found in the instant notifications that Monzo offer. It’s also undoubtedly one of the reasons that legacy banks take several days to show your transactions as this ensures payments are committed before they show to prevent this kind of situation.

I’d rather have instant notification all the time for the odd confusions every so often.

I’ll get my money back in eight days

Get in touch with

and they might be able to reverse it for you.

If you hit the Something Wrong button, you can apply to have the payment refunded. This may happen without having to contact COps, but sometimes you do.

Something to remember for next time.

Most Traditional banks show the available balance which in this instance would be £99 lower than the cleared balance(the one you refer to, that is normally the prominent larger text balance you see). That £99 would still not be possible to be spent as it’s pending.

Amazon normally delay authorization for a couple of hours because people change their minds all the time, and it’s easier for everyone if there’s no transaction to reverse in the first place (I’ve cancelled stuff so often I probably show up as horribly indecisive in their systems!)

If you’re a new customer maybe they do it immediately? Shouldn’t be a problem in future in that case.

I agree, I still think Monzo haven’t got their “pending” transactions 100% yet.

I appreciate that your “available” money needs reduced by this amount, and legacy banks get around it by showing you two confusing balances. While I like Monzo’s approach, I still think pending transactions are not very clear.

For a start, any transaction for which the money is released [Edit: to avoid confusion, I mean, released back to us, refunded, auths not collected] should stop showing as pending and should now be fully completed. These transactions should say anything but “pending…”… A new feed item will be created anyway if transaction is eventually collected, is there any reason for showing the original as pending? It might just be me, but every single one of these transactions in my app – going as far back as the start in October 2016 – still shows as “Pending…”. Just becomes really confusing. Worst case scenario, you can have three transactions: the final completed one, the interim refund and the original pending (though it is not really pending anymore).

Once the pending transactions are fixed, I would make them more obvious: Subtle light yellow row background on the main feed and the pending text in transaction details. This means that these transactions are obvious, without breaking the current ‘real time’ flow. People will be less prone to freak out on transactions which are clearly differentiated as not having fully gone through and I would be less inclined to hassle them via the messenger for authorisations I know will go unclaimed until they actually go white and I have actually been charged.

Finally, I’m not sure about not being notified when transactions settle for more than was expected, but I have already explained my thinking of it here

I’m glad it’s not just me who finds it extremely frustrating, so thank you for creating this thread. This muddying the balances between authorised and finalised transactions has caused a variety of issues that have been talked about on the forum. Such threads include (not all by me, honest, but these are the ones I remember off the top of my head):

I need some help understanding something that Monzo appears to do differently than traditional banks. Today, I placed a pre-order for a CD on the website CDJapan. They pre-authorise the full amount of the order when the order is placed, but don’t take the money until it ships, which in this case is not for over a month. With my old bank, it would come off the available balance, but wasn’t included in the current balance (i.e. what I actually have to spend). Monzo, however, seems to treat it as…

This weekend I spent two nights at an expensive hotel near London. On checking in an immediate charge of £415 was made for accommodation and a £50/night contingency. On checking out I was told my actual bill was £318, and thus I expected a refund of £97. But this did not happen. Instead, 30 hours later I was warned by Monzo that the hotel had made a further charge of £318…the actual bill together with a warning that I was overdrawn and not to use the card again until I had sufficient funds. Th…

The distinction between “balance” and “available balance” is actually very important when charging interest on overdrafts or credit cards, and is something I’m pushing for Monzo to surface (for the readers at home, charging interest or other charges on non-finalised transactions is illegal as they can still be reversed or changed). Since Monzo only show the “available balance” (after authorisations deducted) this means that there are situations where you have no idea if/when you’re going to get…

It’s really bad with overdrafts as you’re never sure if you’re going to get charged or not because the big balance includes stuff that’ll get cancelled later.

For a start, any transaction for which the money is released should stop showing as pending and should now be fully completed. These transactions should say anything but “pending…”… A new feed item will be created anyway if transaction is eventually collected, is there any reason for showing the original as pending? It might just be me, but every single one of these transactions in my app – going as far back as the start in October 2016 – still shows as “Pending…”. Just becomes really confusing. Worst case scenario, you can have three transactions: the final completed one, the interim refund and the original pending (though it is not really pending anymore).

Wow, I’ve never seen this. I’ve always had just one transaction entry for each transaction (with the exception of refunds). It changes state quite happily as things tick through the different processes.

Yeah this is not an issue on mostly all normal transactions, might only be me but I’m specifically talking about refunds, the original stays forever “Pending”.

Here is the most recent example (Original still showing pending, even though there is a reversal) 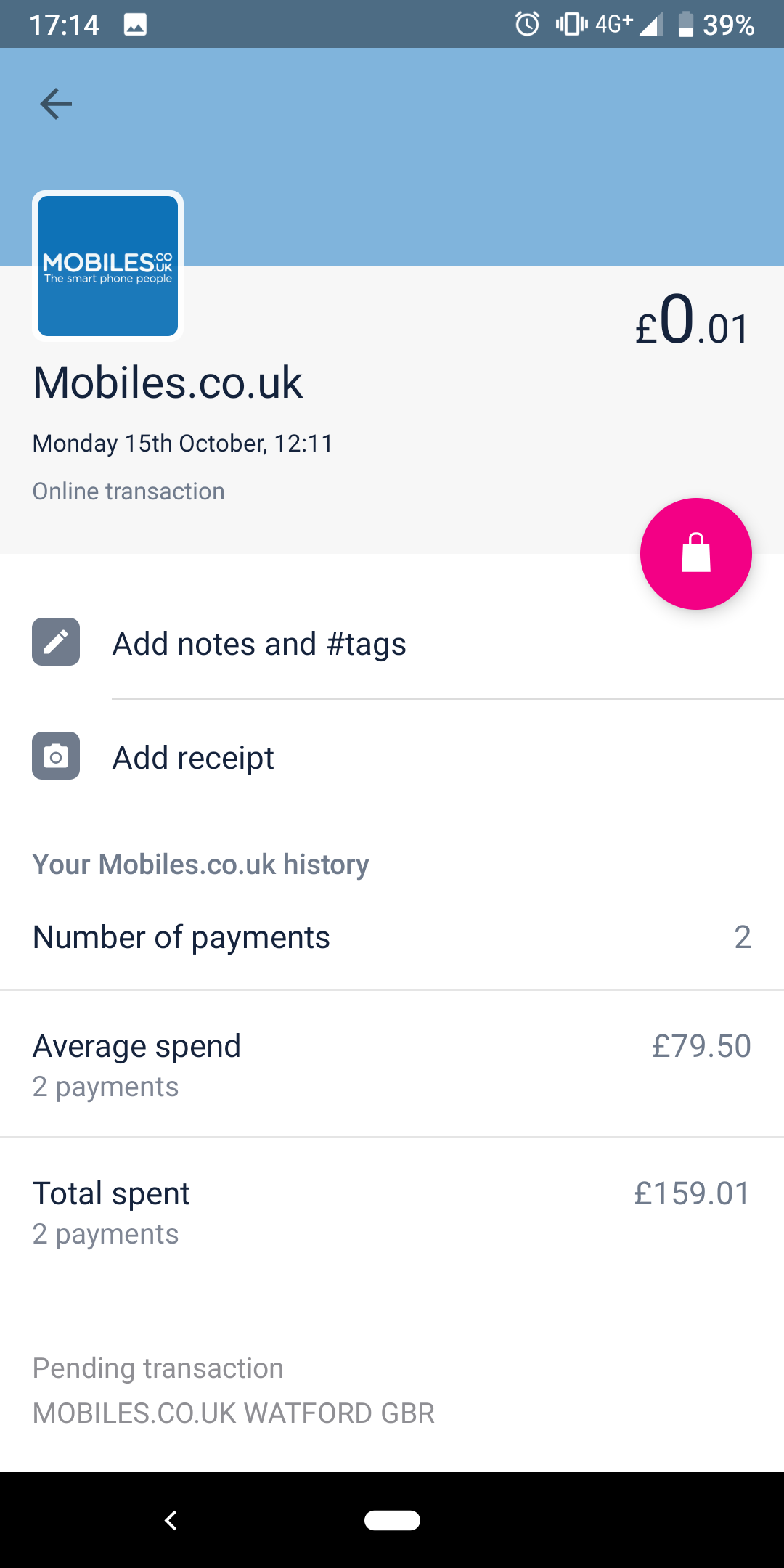 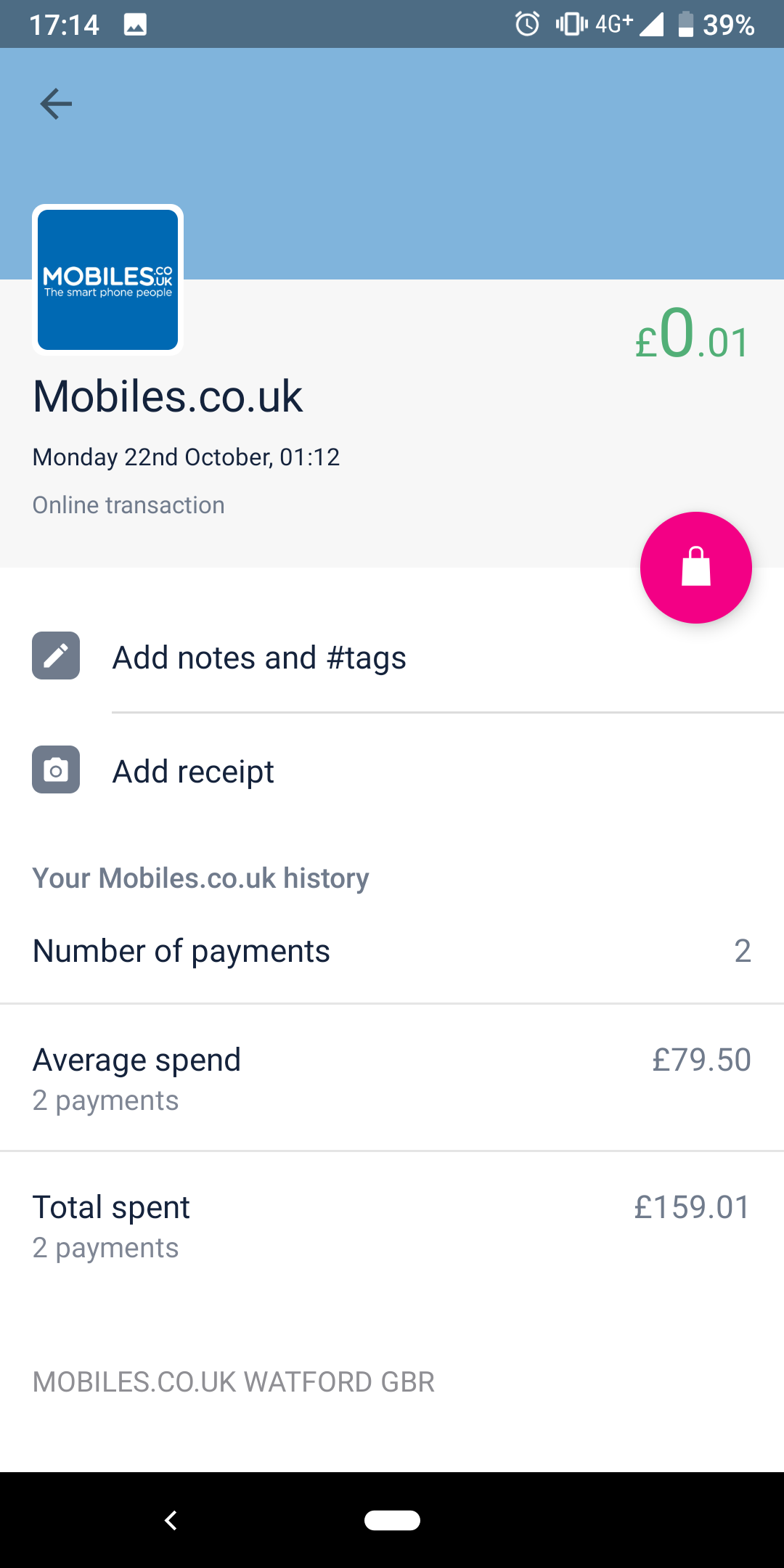 And the earliest I could find (with an eventual charge, so the three transactions), original still showing pending. If the money came out, surely original transaction shouldn’t be pending. Or am I liable to have it charged on me again? 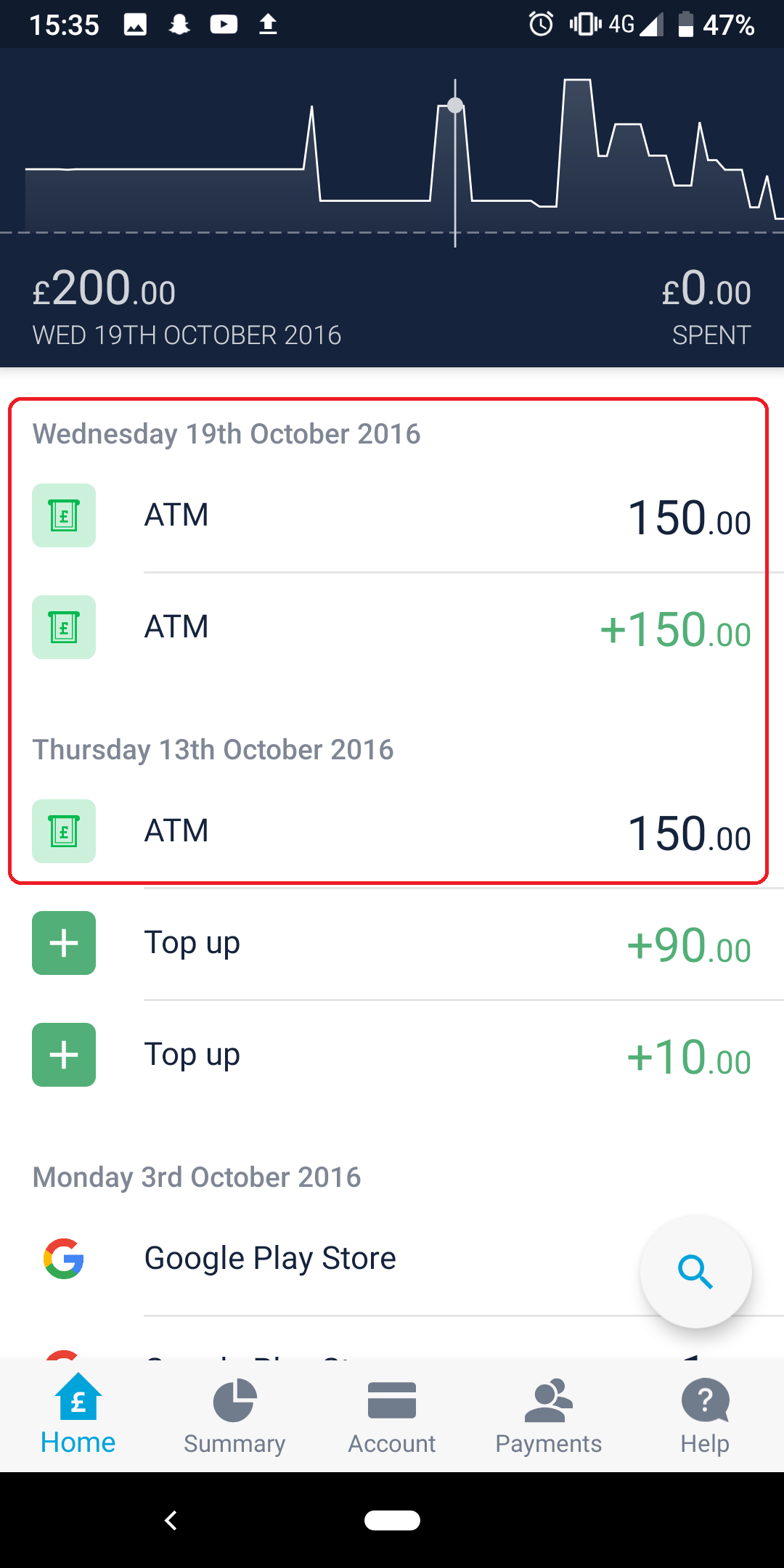 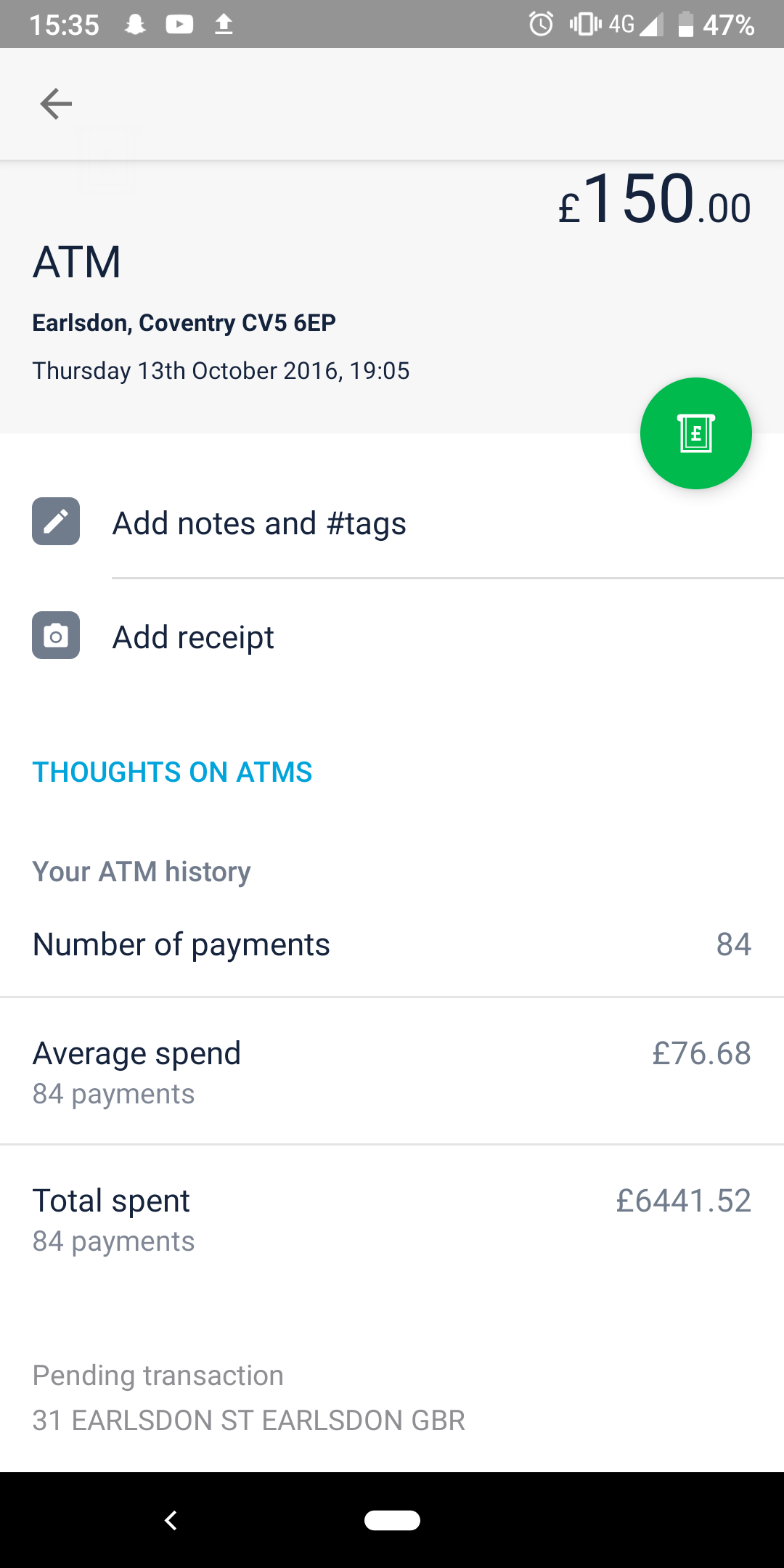 any transaction for which the money is released [Edit: to avoid confusion, I mean, released back to us, refunded, auths not collected] should stop showing as pending and should now be fully completed. These transactions should say anything but “pending…”… A new feed item will be created anyway if transaction is eventually collected, is there any reason for showing the original as pending?

100% agree with this. If the money is released back, the transaction should definitely not still say pending.

A potential way of differentiating between a pending and a collected transaction could be to make the value of pending transactions slightly transparent in the feed just like for pre-approved 3D secure transactions and for unsettled foreign currency transactions (not sure if this is the case on Android).

Can the redesign of pending transactions be looked at again?

It’s really hard to tell what is pending and what isn’t without going into every transaction and reading the small print at the bottom.

I have 2 pending payments from amazon for the same items. It’s taken both of my balance so I can’t spend the money. This really is a bad thing with Monzo. I have to wait for the money to go back in now for one of them.

It works the same with every bank in the country.

Monzo are just honest about it.

Why has it taken it twice though? Other banks you only see it coming out once.

Because other banks don’t show the pending transactions, it’s hidden behind the account balance vs available balance that you see at ATMs.

Monzo is more transparent about what’s happening to your money, therefore you see all of these pending transactions. This can sometimes have the unfortunate side effect of causing some confusion, like in this case.

I wouldn’t tar all banks with the same brush. Some I’ve been with do show pending transactions. Some could absolutely be clearer like the ones that only show them if you put the search date in to the future

Why has it taken it twice though? Other banks you only see it coming out once.

That’s a question for Amazon, not Monzo. I can’t say why they requested it twice.