Just noticed that transactions from ‘House of Fraser’ are showing up in the feed as ‘The Army & Navy’. Is Mike Ashley going for a rebrand or is this some weird time warp data muddle? 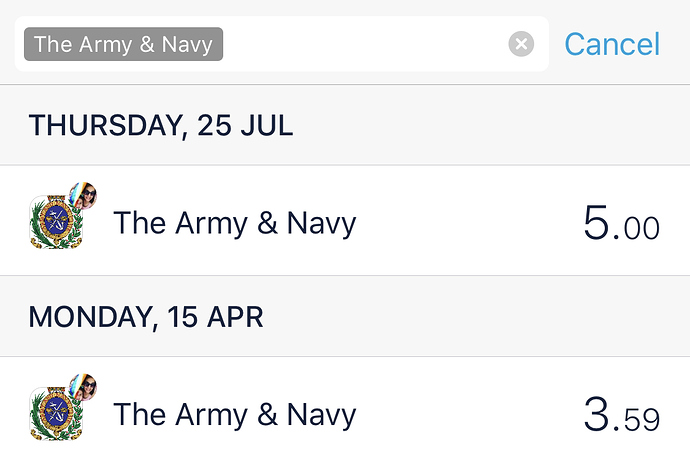 Should it not say “Toon Army”

I’ve reported this stuff loads of times before and tbh I can’t be bothered to look for those threads so I’m gonna make a new one Anyway this merchant data fail is really taking the piss now, this was and always has been The Slug & Lettuce yet all of a sudden it’s some random bar in Copenhagen!! I really do fail to understand how a place can all of a sudden change to something else, is there no manual checks in place or no system locks once verified? It really does defeat the point in having i…

I thought that but Army & Navy haven’t been around for years and I can’t see how that would be in the Monzo system?

What does the merchant data say at the bottom of the sale on the app?

Was anyone else hoping for a thread about Army and Navy sweets?

Army & Navy sweets are a type of traditional boiled sweet, or hard candy, available in the United Kingdom. They are black in colour, lozenge-shaped and flavoured with liquorice and herbs. They are often eaten in winter as their slightly medicinal flavour is similar to that of Cough candy.

Army and Navy was a department store group acquired by House of Fraser in the 70s. Their store in SW1 was badged as such until a few years ago (around 2006 or so). The three others were in Maidstone, Camberley and Chichester. Are you possibly in one of those locations?

Nope, Bluewater. It has always been a HOF and they used to show up as HOF transactions. Why would Monzo have merchant data from a store that closed in 2006

It gets worse. I didn’t think the logo looked like the one for the Army and Navy department store, so I tracked it down.

And very smart it is too. Been taken there a few times. Don’t think you’d get much for a fiver in there though. R-