Just over half of those asked in Britain, and 62% globally, said they were comfortable with retailers collecting information about their habits in exchange for discounts.

Although I have seen other users state they wouldn’t want to share that kind of data with their retailer and for this feature to work it may also be required to share with Monzo too. I can see why some users may not want the data shared. One example being a customer of a sex shop ( not me though

I have to disagree here, there are certainly purchases made with my Monzo card that I wouldn’t want exposed or used for any kind of targeted advertising.

With Monzo’s high transparency, I can see it possible that even the privacy concerned would be attracted to what Monzo is offering. Other banks barely even ask or hide opt-outs in impossible to find places. It depends on your privacy threat model.

So I’ve thought about this a lot.

The current Monzo API has webhooks, which means that a loyalty programme such as Scrummy (http://www.scrummyloyalty.com) could ask to be notified of transactions only when it’s a Scrummy merchant to which the customer is enrolled.

The act of enrolling would involve the Scrummy user ticking a box when they shop at a Scrummy merchant, then Monzo and Scrummy create the hook.

Each Monzo customer could have a handful of Scrummy merchants that they are enrolled into. So if you visit a Scrummy sex merchant, then if you’re not enrolled Scrummy will never be notified and you won’t receive your sex shop points.

This approach would mean less polling of Monzo’/ API, much better privacy for the customer and near realtime notification of points issuance.

We don’t have sex shops on Scrummy. Not yet anyway.

I absolutely love this idea, and I was about to suggest this as a separate topic.

A few other things that this kind of integration could solve -

Presumably, too, if there is some understanding of a particular transaction with a retailer, could that be a pre-cursor to e-receipts?

I’m really looking forward to this too! Check out these topics for some examples of companies that’ve built Monzo integrations -

. Flux has been built to solve that. A bit about us Flux was founded by Matty, Tom & Veronique, the 1st, 2nd & 4th employees from Revolut, we’re now in the Barclays Techstars Accelerator and are on a mission to make receipts meaningful and rid the world of paper receipts. What we’re doing We think it would be awesome to automatically link shopping rece…

Hi there, Massive Monzo fan and investor here. I’m a cofounder of Scrummy Loyalty. We operate a loyalty platform for small but highly awesome merchants. After a few chats with Sachin Karia and some help from Dan Palmer, we’ve put together a proof of concept for a new way for to issue loyalty points. Take a look, we’d love to hear your thoughts on it. Also, we’ll be exhibiting this at TechDay Thursday 27th October. If you’re there, come and grab some sweets and say hi. Apologies for anyone of…

I’ve just come across this app - Launching with unique food and drink experiences, Tail provides exclusive offers to try the latest and greatest London has to offer. Built with the Monzo API, simply shop with your Monzo card to get cashback directly to your account. Which has been built for Monzo users. It looks pretty good, considering the API isn’t properly ready for developers to use to access Monzo’s user’s accounts yet. https://tail.at/img/app-demo.mp4 If you’re interested, you c…

Flux’s trial in particular, seems to be going well.

here would be for you lovely Monzo genius to get deals with all the above and owning a Monzo card, we automatically get a John Lewis card first time we shop with them without registering etc. Same for Waitrose and the other everyday - honest do you carry your B&Q card? Or Coop one?
Any first payment Monzo ask if we want to join the club - if yes discounts and reductions apply automatically without showing another card.

Would be great if you could link your points cards, so for instance if you use your Monzo card in Costa Coffee it would recognise this and add the collected points to the account. Saves you having to carry all your points cards around with you.

It will be nice as long as there’s an opt-out. I explicitly refuse any loyalty cards and would not want my Monzo becoming one without my consent.

If you’re into loyalty cards and don’t want to carry them around, you should check out Stocard. This doesn’t address the

feature you’re after, but it does solve the problem right now of forgetting or not carrying around loads of random loyalty cards.

Stocard looks very good! I’m still umming and ahhing about it… It looks better than Android Pay’s implementation yet at the same time it’s another app that offers functionality I already have

Do you use Stocard? Does it work quite well for you?

I found that Android Pay struggles with some barcodes… Tesco Clubcard being my biggest issue!

Yes, I really like Stocard. They don’t force you into giving them all your details, and it supports both a wide range of cards, and also the ability to add random/custom cards. So it doesn’t require explicit support from the merchant. Also, for some cards it can tie into the underlying scheme to show your points balance. I’ve not run into any barcode problems, but in some places their barcode readers don’t work with a smartphone screen (this is not a Stocard-specific issue, and they have information on it in the app).

I keep various cards in it, including my library card, which isn’t possible with Apple Wallet. Stocard can also can add any of its cards to Apple Wallet (and presumably Android Pay). I don’t know if Android Pay allows adding custom cards, but Apple Wallet doesn’t, so this is an easy way to get custom cards in (though they don’t support all the features ‘proper’ Wallet cards do). Though I find I just use Stocard, as its interface is well thought-through and designed.

Just downloaded to try it out thanks. Good to get recommendation as several apps in the store doing this.

I’m sold! Just downloaded it and used it in Morrisons… I’m impressed!! I can log in and see my live points?! Android Pay loyalty cards are dead to me now

I added my More card, clicked the card, slide to the right and I logged in 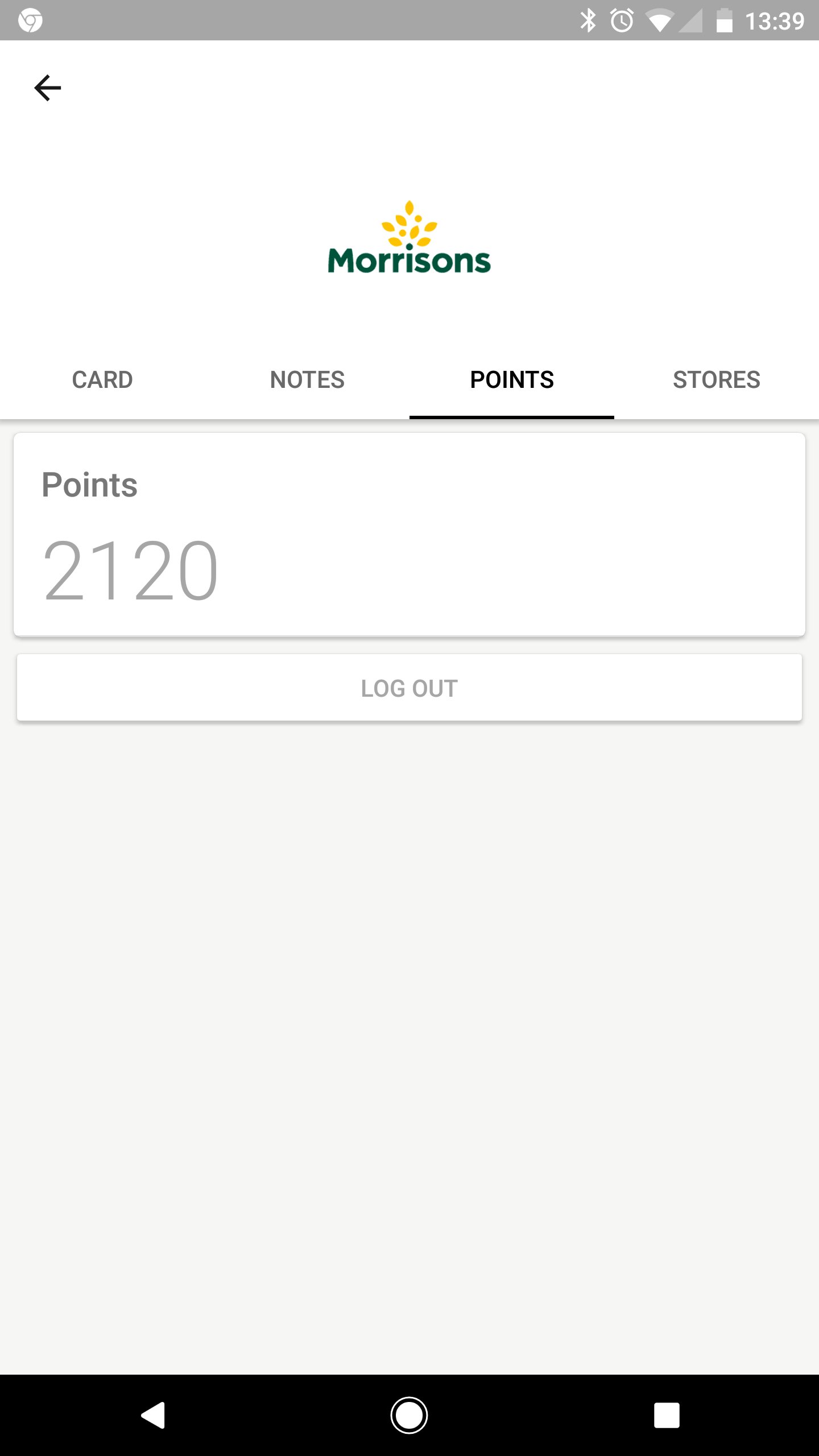 It’s only supported on certain cards. If so, you see the Points tab as in Marcus’s screenshot. If not, you won’t.

All figured out Thanks

I would prefer this to be an OPT-IN.

And if I could choose with which merchants to participate in loyalty schemes, the better.

Absolutely love the idea of paying with a Monzo card and it automatically adds linked loyalty points and discounts! Brilliant idea!