Targets 🚥 Alerts - How Do They Work?

So far this month I’ve spent 32% of the money that I’ve set as my target for a particular category. We’re only 19% into the month so if I carry on spending at that rate, I’ll exceed my target. But my target for that category’s still displayed as green, I’ve not got the amber warning.

As Tom’s mentioned, user’s tend to spend more at the weekend than during the week. Does the calculation for the green / amber / red indicator, take that into account (this matters more for months with 5 weekends, rather than 4) or is it based on user’s spending habits or just the target divided by number of days in the month?

Hi @alexs, thanks a lot for your question! The spending warnings work in the following way:

Now what does too fast mean? Ones spending is as you say not linear (you don’t go grocery shopping every day e.g.) so we wanted to make an algorithm that took this into account while still being very simple. Let me explain how it works with the following example:

Say you have a monthly budget of £300 - that gives you a daily allowance of £10. But spending £12 on the first of the month is not a strong indication that you are spending too fast. It is probably down to the fact that you spend a little more on some days and a little less on others.

This model is clearly too simplistic - there are bigger fluctuations in some categories that others (holidays vs grocery shopping e.g.) - but it is a start and already a bit complicated to explain.

But how it works for our users is what really matters so please let us hear your feedback and help us tweak the algorithm and make Targets a better tool!

Thanks for taking the time to explain the alerts in detail, that’s exactly what I was looking for & it’ll be really useful to refer back to.

My first reaction to the allowance for savings was that I still need an alert as soon as my spending’s over the sustainable level, otherwise I won’t decide to save & as a result, I’ll go over my target.

But obviously, as you say, there will be days when I don’t spend without thinking about it too so I’ll give this some time to see whether the overspending is naturally balanced out.

Question for @ole
I have a quarterly bill for my car parking permit - what’s the best way to do this?
I put a target for the month but then have to remember to increase it every 3 months?

The same sort of challenge was raised here too

Hello! I wanted to mention a problem I noticed with the new Targets feature. Here’s the problem: I have a yearly travel budget which I spend sporadically throughout the year. This makes a monthly budget for this category useless as some months I spend £0 and others I’ll spend £500+. This will be an issue for any category where spend is sporadic. Possible solution: allow for a yearly budget option toggle on a per-category basis. What do you think?

we didn’t manage to come up with a solution though!

if you only used the bills target for this one payment, you could set it at the bill total & then deactivate it on the two months when it doesn’t apply. But if that won’t work for you, I’m not sure what’s the best approach.

if you only used the bills target for this one payment, you could set it at the bill total & then deactivate it on the two months when it doesn’t apply. But if that won’t work for you, I’m not sure what’s the best approach.

Current spend is £195 (Cheap parking in Norwich!) this month, but then nothing for the next two months.

I don’t have a good solution to this case yet I am afraid. We started out with just monthly targets to keep it simple well aware that in many cases, that is too limited - holidays being the most obvious one.

Once we are a bank, it could be interesting maybe to combine budgeting with savings pots. So if you e.g. have a bill of £150 to pay every quarter, you set a budget of £50 per month. In months where you do not pay, the money are set aside so that you won’t see a spike in your spending when you actually have to pay the bill.

I don’t have a good solution to this case yet I am afraid.

OK, I’ll just bump my target up every quarter until you can work out something a bit better

I do like the idea of budgets and spending pots that you mentioned but I think I would like to see the spike in the graph every 3 months (or whatever period is appropriate). Putting £50 in a pot would work for me as savings for future bills.

I think the colours should be shifted ‘up’ one level. If I’m over the ideal, but can still easily save that 20% by being slightly more careful, it should be yellow to remind me.

If I’ve gone past that 20%, it should go red to tell me that I need to make a serious adjustment.

Hey @ole & @daniel.cannon, now that we’re coming to the end of our first month with the targets, I wanted to share my feedback & a suggestion.

To be honest I’ve been struggling to get comfortable with the alerts, particularly with the targets being green early on in the month, when I had already spend quite a large portion of my target (& not because of the bugs).

My concern is that I’ll spend more at the beginning of the month than I can realistically save back, in order to meet my target by the end of the month. Because of the way the calculation works, the user will potentially end up being alerted that they’re not on track to meet their target too late in the month, when they have the least time to save & get back on track.

Here’s what I’d prefer to have instead:

That would mean that I’m alerted as soon as I’m spending too much so I’ll know that I need to reduce my spending until the alert switches back to green.

I’ve modeled this in this Google Sheets spreadsheet. Once you’ve copied the file into your drive, it enables you to: 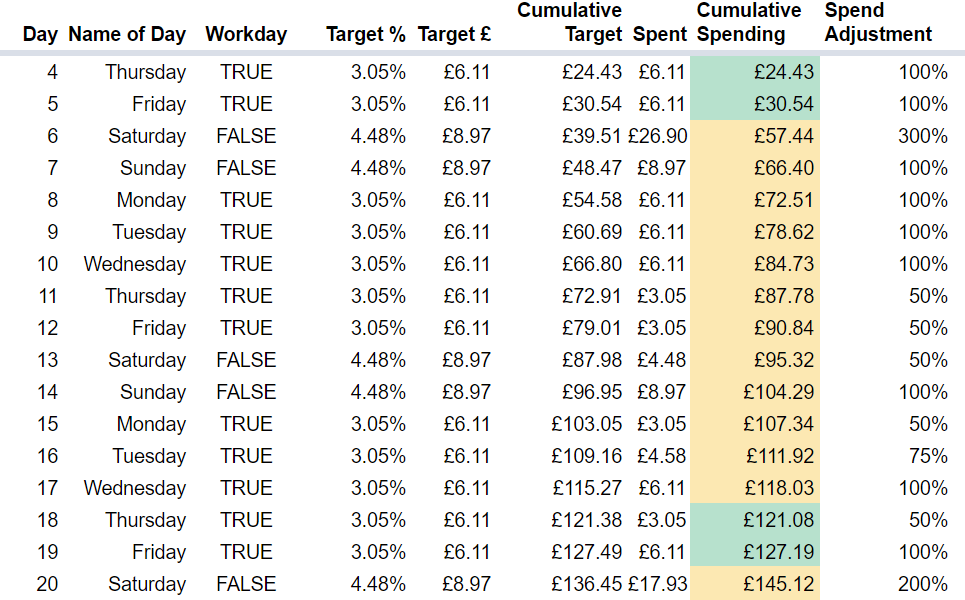 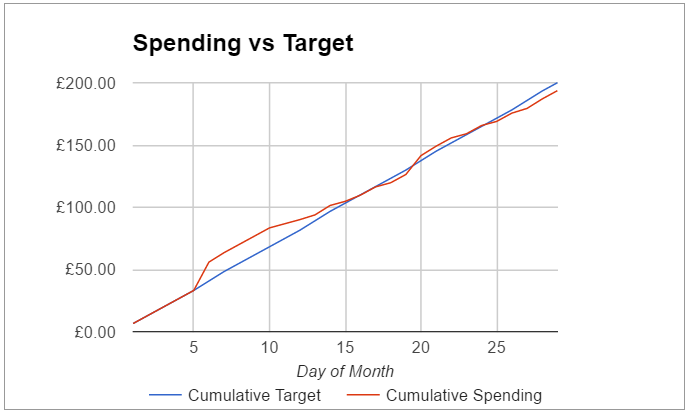 Obviously I’m biased but I think this model is more intuitive (I would never have guessed that the calculation was set up the way that it has been) & enables users to react more quickly when they are overspending, while also taking into account greater spending at the weekends.

How does this look?

Note This file can be viewed by anyone through the link I’ve shared, I wanted anyone in the community to be able to experiment with the model & see how different scenarios look.
I’ve set the sharing on this file to view only so you’ll need to copy it into your drive, in order to edit it. If you are unable to do so for any reason, just let me know.

…they are allowed to spend more at the weekends & less during weekdays.

For me that is opposite to my experience with shops in my town shut all day Sunday and closing early on Saturday I spend more weekdays than weekends.

…they are allowed to spend more at the weekends & less during weekdays.

Although you might, and I always do, have weekends available where more in danger of higher spending, that’s not the case for everyone. Many people, (those in retail/sales industries as examples) work weekends and have the middle of the week as their equivalent weekend. I use to be available to work any 5 days out of a full 7 day week so it can be different from week to week.

That’s fair enough, I added that element because Tom had mentioned that most people spend more at the weekends. Obviously Monzo had the data to see where the spikes are (which I’d be interested to see too actually).
At the moment Monzo seems to be favouring simplicity & one size fits all solutions, which are designed for the majority of users, to enable speed of delivery…

For users who work at the weekend, their cumulative target would have increased over the weekend so that when they do take their time off (I assume most do so early in the week), they already have extra “allowance”.

But perhaps there should be a setting to enable users to choose between weekends or weekdays as the time when they spend most of their money.
As a general rule more settings are bad (complexity) but I do think it’s important to include this sort of allowance, if the alerts are going to be as precise as I’m suggesting…

That’s true, I’d agree your suggestion would be better than it is at the moment. I also hadn’t considered the cumulative factor.

Monzo’s future developments into machine learning may provide the answer towards making it smarter and bespoke to the individual account holder. However it’d inevitably be a little on the dumb side for the first few weeks until it’s learned our spending habits.

Hi, I’ve scanned quickly through this thread, so apologies if this is already covered. For me, I’d just like to set a lowest limit warning just so I know to top up - at any time. Just a ‘time to recharge’ note, somewhere clear. Thanks.

I might be misunderstanding your request but I think that feature’s already included in the app (for iOS anyway) - when your balance gets to below £20, you will receive a feed item & a different notification for your transactions, prompting you to top up. Is that what you wanted?

Hi,
Exactly. But I don’t see it on Android. I’d also like to set the limit value too.

I assume it will arrive in Android anyway, if it’s already on Apple.

I assume it will arrive in Android anyway, if it’s already on Apple.

Yes feature parity is the goal

I’ve mentioned this before but don’t think I heard back. So I just went out for dinner tonight with 2 friends and my gf. It was £70 and I paid. I’m now getting £52.50 back for it but my eating out and total spending targets are screwed for the rest of the month.

Is there any plans in the short term to address this? None of them are on Monzo by the way so their payments come in as top ups and will do so after bill splitting feature is released too.

Agree with you here - have the same issue from doing grocery shopping with my girlfriend today. She’s paid me back but that doesn’t reflect in my targets because I can’t assign her payment to a category which is really annoying.