Monzo aren’t the first to have offers showing in the feed. The Halifax rewards also show up my account transactions attached to certain transactions. Here’s an example of shopping at Sainsbury’s giving a £3 cash back offer when spending £30 at Waitrose. 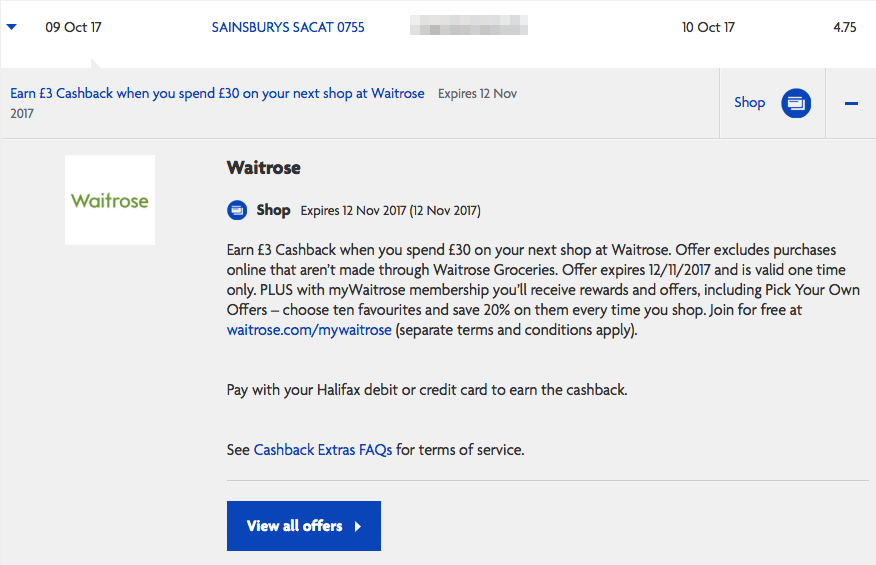 That’s exactly the kind of thing that would annoy me, esp. since the nearest waitrose is miles away… it’s just a competitor attaching their adverts to sainsburys (and I bet halifax were paid a lot of money for that).

Attach sainsburys offers to sainsburys, and it would make sense.

Santander 123 account shows ‘related’ offers in exactly the same way on transactions screen and mostly offers Waitrose and Morrisons if I use my card at Tesco or Sainsbury’s. And then they have a separate offers section which is offering £50 cashback for a switch to First Utility. 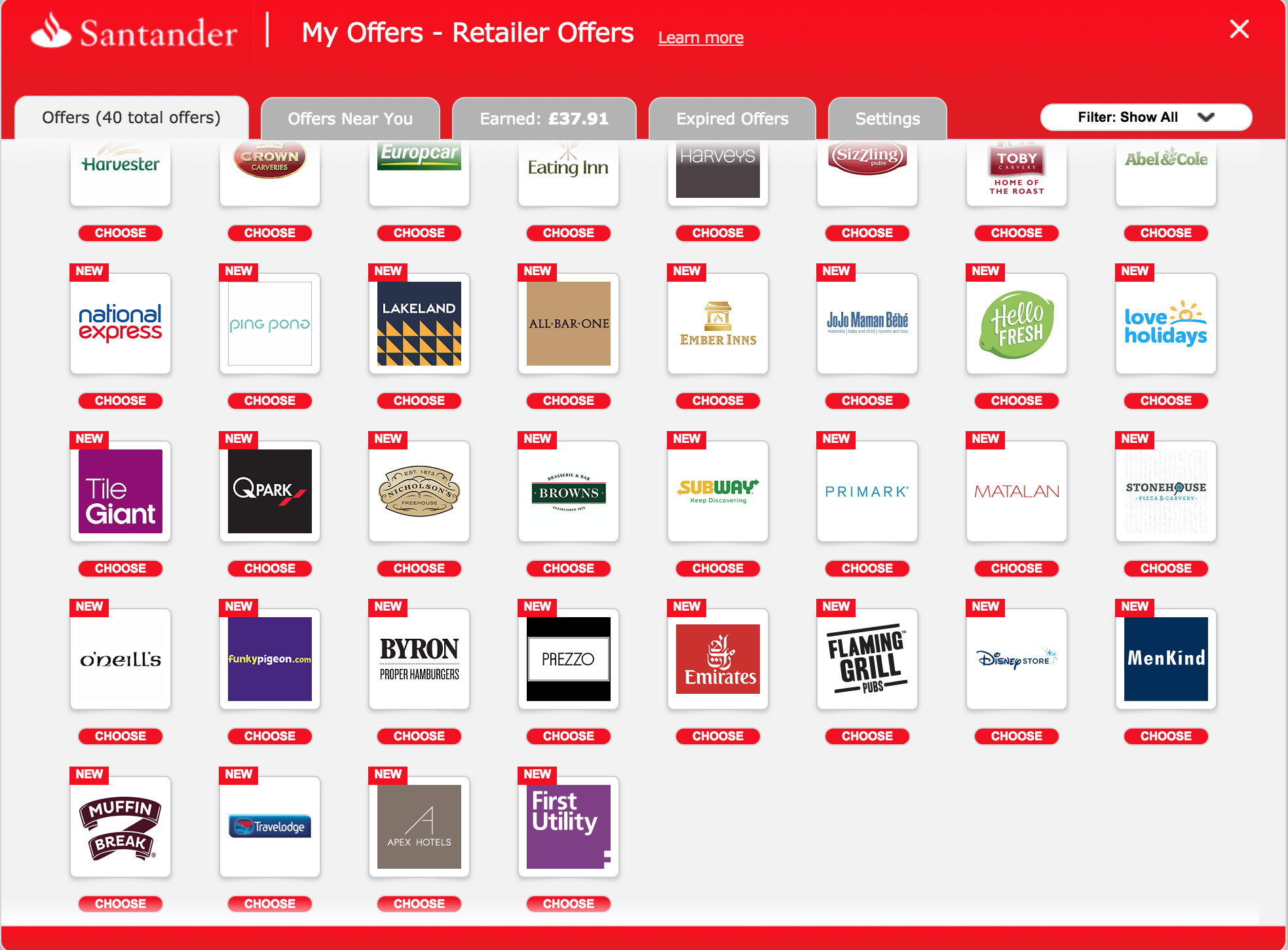 That looks awful and overwhelming. I very much prefer Monzo’s approach.

Some of these aren’t personalised. Hello Fresh (whom I actually rate and would recommend) offer discounts to new subscribers constantly. It’s their basic loss-leader business model. I would guess this offer isn’t in any way personalised to each Santander customer (I’ll bet it’s just get x% off first order) in which case you’re just being served another pointless channel of advertising.

Halifax have a similar section with all the offers. A lot of those offers looks like the same retailers that are available through the Halifax rewards scheme.

I found the Nationwide rewards scheme, which is more obvious that it’s run by Visa has far fewer useful offers, many being the more expensive travel sites.

I suspect the Santander and Halifax are probably both run by Mastercard and heavily branded for the bank, making it look as though the bank fully runs it.

Bulb have just doubled their switching bonus for the next 7 days! £100 quid for both parties if you switch.

My referral code is you’re feeling generous is

Bulb appear much dearer looking at the figs, unless I don’t understand them! lol

You’re comparing a non-green tariff to a green tariff. I’m on Bristol Energy’s green tariff, it isn’t the cheapest out there, but it’s pretty cheap and supporting a community-owned initiative.

Nothing is truly free in life, Monzo’s value proposition is excellent. If some adverts are too much for you, fair… but I think it’s a great trade-off.

Attach sainsburys offers to sainsburys, and it would make sense.

No, it wouldn’t - if you’re already their customer, why would they pay to win you as a customer?

Over 30% of people switching to Bulb’s renewable energy come from a friend’s referral. We couldn’t have got this far without you.

To thank our members, we’ve doubled our referral reward for the next 7 days. You’ll get £100 and your friend will get £100 when they sign up to Bulb through your link.

Whilst it was understandable initially, it’s all getting a little bit tiring seeing endless “gimme a referral” links appearing on this thread. Can this not be halted or at least a new thread for this kind of thing created so that those who want to learn about Monzo’s energy offers don’t see these clogging up their feed?

Would it be a good idea to have a wiki or similar to put our referrals to companies we recommend? I just used Adam’s referral link for bulb and tacked mine onto the end of the thread - I’m delighted to be able to benefit one of our community whilst getting what appears to be a good deal from the switch too. Would keeping all referral codes in one area be better? How would we ensure it isn’t spammed? How do Monzo feel about it?

Maybe someone could create a web app which allows everyone to enter their referral link and then when someone needs one the app can give them out at random, giving everyone a fair chance at getting their referral bonuses without being spammy.

No, it wouldn’t - if you’re already their customer, why would they pay to win you as a customer?

I understand what you mean - but isn’t that what Sainsbury’s nectar coupons that they give out when you pay are doing? They want to retain you as a customer, rather than win you as one. Smaller pay out (points not cash) but they are still giving an offer to an existing customer. And sometimes it is ‘cash’ (kind of) when they give a ‘get £1.50 off your next shop if you spend over £15’ coupon.

I understand what you mean - but isn’t that what Sainsbury’s nectar coupons that they give out when you pay are doing? They want to retain you as a customer, rather than win you as one. Smaller pay out (points not cash) but they are still giving an offer to an existing customer. And sometimes it is ‘cash’ (kind of) when they give a ‘get £1.50 off your next shop if you spend over £15’ coupon.

Absolutely, but as you note - the payouts are lower and setup such that you have to continue shopping to get them. Buying loyalty, in other words. And Nectar points? Nectar is the one supermarket loyalty scheme I don’t even bother with. The hassle of scanning a barcode is far higher than the 1/10,000th of a penny the points are worth (note - slight exaggeration on value).

I agree about Nectar points - I only use them as I find it entertaining to confuse their machine learning as I use someone else’s Nectar card.

However, if you combine something like Flux: The End of Paper Receipts & Loyalty Cards then the effort becomes zero (in theory).

You link your Nectar card, it gives you points every time you shop without you doing anything.

The offer from Sainsbury’s to those Monzo sees shop there but do not have a linked Nectar card could then be a ‘get x extra points if you link your Nectar card to Monzo’ - as Sainsburys want more people to actively use the Nectar scheme. If you don’t want to you dismiss and ‘don’t show me again’, but in theory you do it once and then get some value each time you shop with zero effort.

Or Sainsbury’s experiment with actually offering minimal pure cashback - again small because of aim to retain not to win, but still has value to the customer. I suspect Sainsburys would not want to try this though.

Getting into too much detail - my point is that Partners do have small reasons to attach their own offers to their own customers.

Just made the switch using a referral code from above. Straightforward sign up process so far! The estimated price was far less than I’m currently paying - but then again I have never switched before, it was about time!.

If you want to use my code, here it is

This has drifted rather off topic in parallel with the thread associated with the original blog post on this topic. Discussion may continue there.

We just posted a blog post on testing energy partnerships and we’d love your feedback! https://monzo.com/blog/2017/09/21/testing-energy-partnerships/