So, smart displays seem to be the new battleground for connected home devices.

I was in Target here in California a few days ago and they had a live demo of the Amazon Echo Show. Frankly, the concept is excellent, but as an owner of both a Google Home and an Echo Dot, Amazon’s tech pales in comparison. In fact, my Echo Dot gets no use as the Google devices are far superior.

The rumor for a few months has been that Google were working on a similar device. However, at CES it’s been revealed that they were working on a platform instead, and that multiple OEMs will come out with smart screen devices running Google’s software. Lenovo were the first to show one off at CES.

Thoughts? Would you buy one?

I would be a fan on this in my car, as Android Auto. Not sure I would buy one for my house necessarily?

I just need the android auto part for my car!

Still (im)patiently waiting for the manufacturer to update their firmware, something they promised for 2017 and have promised (again!) for this year too

Google and Amazon are both companies I try to avoid, as I don’t really want to see either gain greater clout than they already have.

I’m not convinced by smart displays or smart speakers. It kind of feels like several years ago when every electronics company was pushing 3D TVs because they’d decided they were the next big thing despite very little interest from consumers. Maybe this fad will take off, maybe not, but I’d really like to see a different company win if it does…

@simonb I’m curious what you actually use the Google home for? Do you find it genuinely useful? I struggle to think of a use case.

Still (im)patiently waiting for the manufacturer to update their firmware, something they promised for 2017 and have promised (again!) for this year too

Interested in which car company that is? I didn’t know of any upgrading to support Android Auto!

@simonb I’m curious what you actually use the Google home for? Do you find it genuinely useful? I struggle to think of a use case.

I find it incredibly useful. I have the regular size Google Home in my bedroom and the Home Mini in my kitchen. I use them to play music, control my Nest thermostat, remind me of my To Do list, set alarms, broadcast messages home from Google Assistant, look up trivia facts, look up the weather, check my calendar agenda… Lots of things!

That would be Mazda

Even though it seems like it's slowed down since launch, Android Auto has picked up another car manufacturer to add to its repertoire. The latest is... by Jordan Palmer in Android Auto, News

I was surprised to find out the other day that google assistant isn’t actually in android auto yet. All it does when you use android auto is do a google voice search.
It is coming soon though:

Kind of reminds me of this!

This is a portable TV/VCR type thing from the 80’s. The more observant amongst you may notice this is a screengrab from the Knight Rider episode Soul Survivor where K.I.T.T’s CPU is taken out of the car and they are forced to put him inside a portable TV, much for the amusement of everyone else! The LED module in the speaker and K.I.T.T’s ‘CPU’ are not part of the original TV!

Anyway it’s the first thing that popped into my head when I saw it and wasn’t sure what it was called to provide a different picture!

Given how popular the MagicMirror seems in the RaspberryPi community, I do think this has potential.
.

@HughWells Have you considered an aftermarket radio? I see two companies upgrading (Hyundai USA and Kia USA), but it would not surprise me if most would charge you or only have it in the latest models…

My Google Home device went into a drawer after a fortnight. Amazon Alexa in multiple rooms in my house. Google Home search was better, but l found my integrations work better on Alexa.

I had an Echo Dot in the car linked to the car WiFi. Was fun, took a bit of boot time though on each engine start…

Interesting, I had the exact opposite experience. I did a side by side test of my Google Home and my Echo Dot and Google won with 90% of what I threw at it.

I was surprised l did think l’d end up being more Google.

Alexa inability to understand my accent sometimes does drive me loopy. Asking her to play “the inevitable end by Röyksopp” nearly had Alexa embedded in a wall.

I setup my Echo Dot’s with HomeAssistant on a raspberry pi, so I get better access to various things (my car tracker syncs with it, fish tank is controlled by it, a few smart plugs and some light bulbs that turn on with an alarm in the morning)

I find timers are probably my most used feature though. ‘set a timer for 10 minutes’ or ‘in 10 minutes remind me to do X’

I still really want one of these devices and I’m upset that Amazon are basically running away with the market at the moment, since Alexa is just so, so inferior (at least for my needs) compared to Google Assistant.

Good news is : Google might be making their own device too (as well as licensing the software out to third party OEMS). 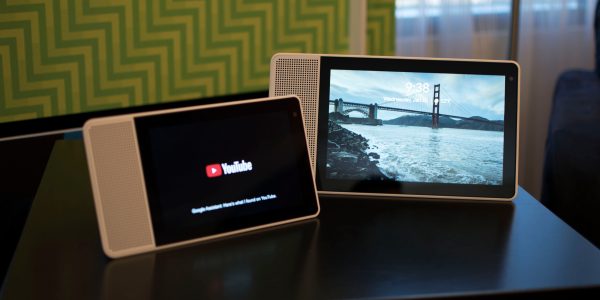 Google does not rule out making its own Assistant smart display

Months before Assistant smart displays were announced at CES 2018, we heard rumors that Google was working on its own device. Codenamed “Manhattan” in September, a new report today sugg…

You can get Google Assistant to run on Alexa if you don’t like Alexa… I’ve not tried it yet though.

I’ve been keeping an eye on this, got a Home in the Kitchen and something with the ability to also watch TV/Netflix/etc would be great.

There was a concept some time ago where you would effectively have dumb screens fed by a smart device. This should cut costs and centralise the data. Now this I would be a fan of. So whatever room I go into the dumb screen detects the closest primary device and displays whatever is relevant in the context at that time. Good examples today are smart watches (to a degree) and in car entertainment (android auto and CarPlay).

What I don’t want to do is keep buying smart home devices that become outdated and in need of replacement.

Asking her to play “the inevitable end by Röyksopp” nearly had Alexa embedded in a wall.

Thanks for this - listening now, forgot how much I enjoyed Sordid Affair.