I could read it, sans paywall

Yea, thanks, I know. But I couldn’t see the headline to Google anywhere, as I said before.

Thanks for sharing the headline

There was me thinking southerners only drank shandy.

Where the £6 cocktails at?

I’ve not read it, but an intro like that just sounds desperate and bitter. The FT really is going down the toilet.

I shop at morrisons and eat out at greggs.

Someone please help my budget this, my family is dying.

I clicked on the paywall link which provided the headline…

Anyway, hope you managed to read the article

I don’t think we are Monzoing correctly

Maybe you should try and change energy supplier, might save you £5 a month! 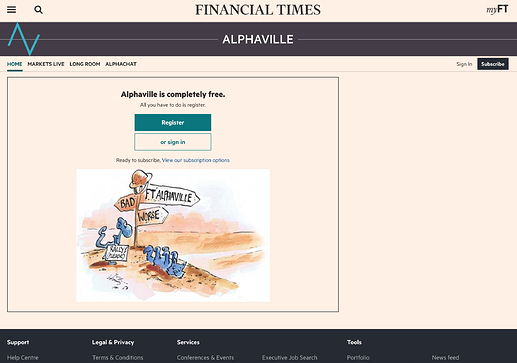 This parts stuck out to me, and it’s true:

“Flicking through the results, and it’s achingly clear what the problem is: Monzo has yet find a real business model.“

Or try on mobile and click on the AMP version not the actual article.

I saw them as pointing left, back towards the reader + then right…

You know which direction it is going to go in next…

“Monzo is of course still a relatively young company, so it is understandable that it’s still taking business baby steps whilst focusing on growth. It’s also worth bearing in mind that lending is just one of its possible revenue streams, with the company launching a £5-per-month premium service earlier this year and earning decent income from transaction fees. … Of course, how Monzo chooses to allocate its deposits is at its discretion. It doesn’t have to lend the money if it doesn’t want to. After all, there seems to be a willing line of investors looking to fund its growth for the moment. … Perhaps the issue isn’t so much that Monzo doesn’t want to lend, but is just getting to grips with the practice. Building the sort of customer base who think of you as a reliable source of credit, rather than a flashy current account, takes time. There’s also the issue of culture. Lending is a difficult business and shifting the gears away from a growth mentality to one with a focus on mundane banking tasks, such as customer due diligence and compliance, isn’t easy. Just ask Metro Bank. … Monzo arguably revolutionised the customer-facing side of current accounts, and was duly rewarded with a slug of deposits. But now comes the hard part: putting that capital to productive use.”

I stopped reading after the intro:

Maybe you shouldn’t have.

I don’t think the FT article is wrong. Monzo originally stated that its intention was to make money by referring customers to businesses that could save them money - for example Bulb. However, there were very few of those. They then launched Monzo Plus, which was intended to become a revenue-generating modular added-value account, where customers could choose the benefits they wanted. Thus turned out not to be feasible.

Given the above, to claim that they’re struggling with defining their business model doesn’t seem far-fetched.

They’ve now very recently relaunched Monzo Plus - and since none of us can see the numbers, it’s probably too early to tell whether this will turn out to be the solution.

They’ve now very recently relaunched Monzo Plus - and since none of us can see the numbers, it’s probably too early to tell whether this will turn out to be the solution.

It won’t be. Out of four million accounts, lets assume (generously) that 50% are active. Of that two million lets assume 10% take a plus account at £60/year - that is barely one million in revenue from Plus. Tiny tiny numbers. I imagine that Premium would be more profitable though.

They have GOT to get more people depositing salary and using Monzo as a primary account… offering free 12 months of Plus might work as a good switching bribe once the initial Plus signups die down.

I think you’ve got some dodgy maths there!