Is it possible to add a notes field when splitting the bill? It might be obvious sometimes what something is for, but if for example I am doing a Sainsbury’s shop and want my partner to know that it is “stuff for dinner” or “wine” or something, I can’t do that currently.

Edit - or even just pulling in the text from the existing notes field attached to the transaction could work.

Oddly enough, I seem to have bill splitting on my OnePlus 6 . I get that the engineers are still testing but my Monzo.me has vanished. Thinking I might just have it early, I tried it and the next button just says ‘hi’ to me. Funny, but doesn’t help trying to split cinema ticket costs!

Same for me on iOS.

I don’t like how this does not support non-monzo users. If I pay for a large bill it takes the whole amount from my monthly budget even though I’m then being paid back by friends. If you can’t support the connected payment there should at least be a way - in app - to select received money and mark it as a credit for previous spending so that my budgeting isn’t all messed up as a result.

I opened a bug about this because I’m having the same problem:

Issue: When I receive a payment on my account and assign it to a specific category, the spent amount for the category and the entire budget is never adjusted. When someone pays money into my account I want to adjust the specific category because then the budget goes out of whack. Details to reproduce: Just send a payment to your monzo account and assign it to a category, the amount spent for that category won’t be adjusted. OS: Android Device: Note 9 App Version: 2.13.1 Screenshots:

I also made some suggestions to improve the budgeting tool, especially on bill splitting situations:

I’ve been using the budget feature to try and have a better understanding and control over my spending lately, and it’s really great. I’ve noticed that there are some use cases which are currently not supported and some others which could be improved in order to ensure the accuracy of the budgeting tool. In my case, most of the problems I’ve been having are related to splitting bills with non-monzo users, although maybe they apply to monzo users too, but I haven’t had the chance to use any form…

Maybe if we make some noise we can get some improvements on the budgeting tool, but I guess it isn’t the most popular feature.

Given that one big list has ended and they seem to be in an interim ‘fixing things’ phase, there’s hope that the current labs project should get some attention.

When bill splitting from a joint account (ie. a transaction paid with joint account), it would be good if you could choose to have 2 shares for ‘you’ and then 1 share for everyone else.

With the new bill splitting in labs its possible to enter the exact amount each person owes is it not?

At least it is for me on iOS

Yes, it’s possible to enter the exact amount. But this means having to calulate separately how much each person owes.

Okay, in my example it’s not very difficult to work out how much each person owes, but if the amount was £179.67 and there were 7 people splitting the bill, it would be good if it automatically could do this for me.

Currently it automatically splits it equally between everyone, but it would be good if it would split it equally while including 2 shares for the joint account since there are two people.

If Monzo had an inbuilt calculator like Bunq then you could do all your calculations from the bill splitting screen, which would solve your issue and be really useful in a load of other situations. 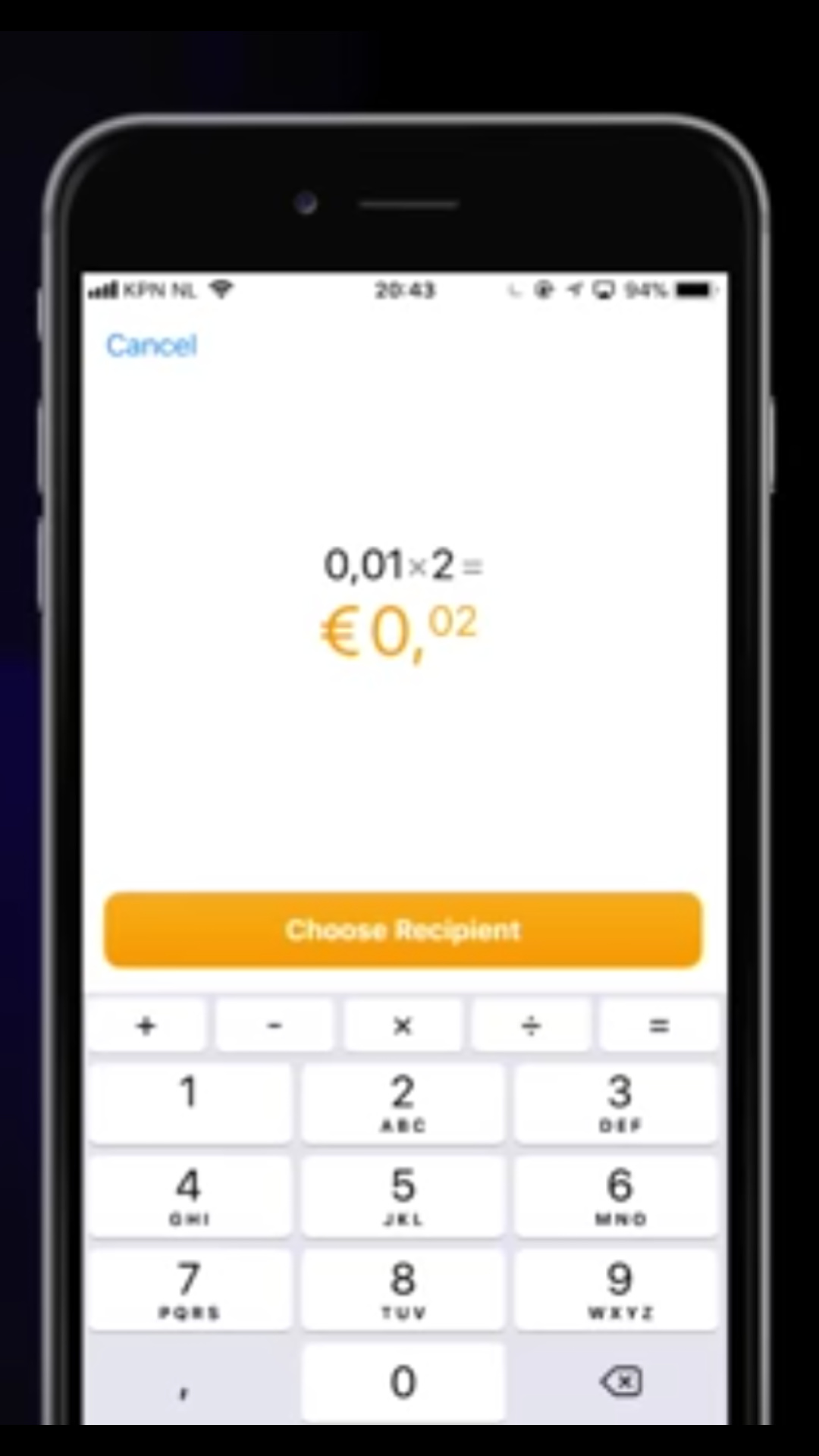 I’m currently on holiday with my other half, and we are using my card for all the spending.

I can’t help but think it would benefit from a ‘holiday mode’ where I can flag all transactions to be automatically split, and the corresponding payment from my other half contained in the transaction instead of this… 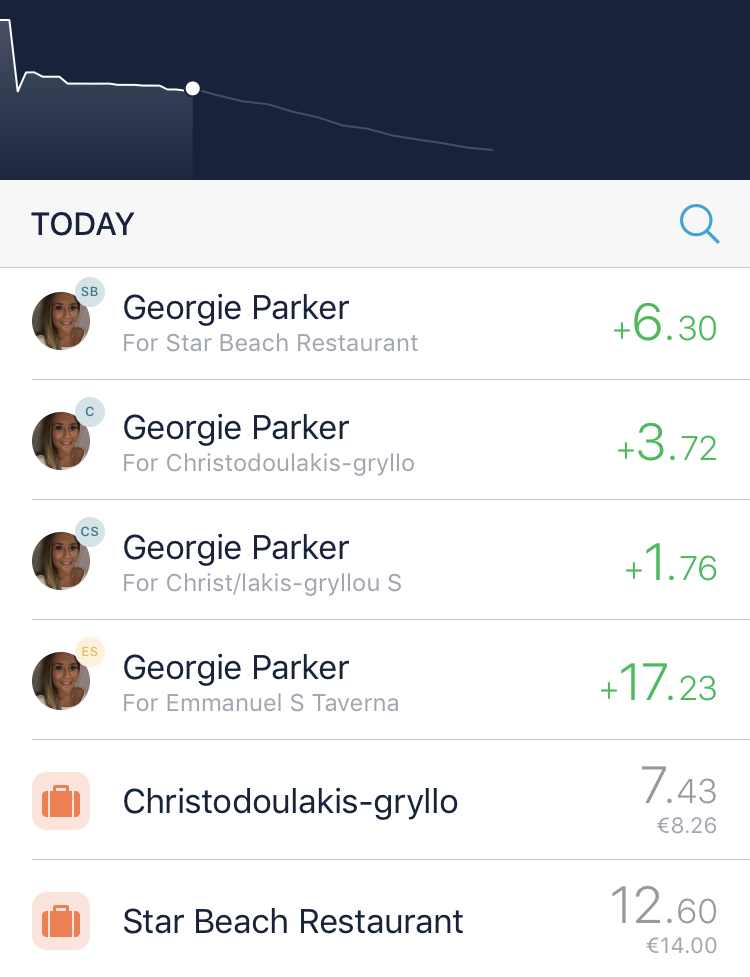 For reference, we would have used our JA but without the ability to create Pots yet, she wasn’t comfortable in bringing the card abroad.

I’ve noticed that once I’ve accepted a payment request (and gone through the Touch ID / pin prompt) I’m returned to the payment request screen that still has an option to accept the request even though it’s marked as paid just above the button.

I’ve also noted that once I’ve been prompted for Touch ID when accepting a request I’m then asked to enter my pin, even though the Touch ID auth was successful. Pressing the Touch ID icon in the top right of the pin entry screen puts me back around this loop.

Used this on Saturday. Was with a couple of mates who are both on Monzo. Ordered some stuff at the bar, went in to the transaction on my app, split it with them, they got the notification straightaway and processed it. Brilliant.

Side note. I do usually get the rounds in, but I wanted to try bill splitting!

Although I agree with some comments below (that it would be good to connect with non-monzo account holders) when I have used it, I have liked it.

With modern tap payments thought, I wonder how likely I am to use this feature in comparison to just asking the merchant to simply split the bills and pay separately. I suppose its good when you’re in a rush or when I am out and decide to buy a gift for a friend and want to split the cost.

I can see bigger potential for a holiday or group event and I need to split the cost of tickets or group travel OR for a small business.

+1 for doing multiple at once. Me and my friend just used this on holiday and it was absolutely amazing. A future feature to accept multiple at once would be great. We were going through transactions every couple of days and ending up with 20+ all at once.

I was somewhat wondering when making the slides earlier today if I should crop down to just the notification. I’m now very glad I didn’t!

Am I the only one not seeing what they’re talking about?

Switched the feature on in labs and had no issues in iOS at all.

Adding non-monzo users to the new bill splitting UI is definitely something on our radar, but it adds a level of complexity we didn’t want to get into for v1. Additionally, we just haven’t seen much real-world use of monzo.me in general. All this meant we decided to focus on making bill splitting work really well for those on Monzo.

I think unfortunately this is a bit of a self-fulfilling prophecy. I have not used Monzo.me much because it is so clunky. I have several friends using Monzo (yes I encourage people to move from PayPal, etc. to Monzo) but it is very counter-intuitive to have to send them an SMS or WhatsApp message to request money, especially when the app can see my firends are Monzo users to send money.

When I saw the presentation video about dealing with splitting bills in 3 sections I got really excited because I hoped that the existing “request money” would be updated as part of this, with the “split bills” part being updated separately.

For me the lack of use of Monzo.me requests is due to the clunky nature rather than the lack of demand.