Is the economy set up in a way which doesn't support mass saving?

I’ve been wondering whether the economy is built on a reliance of people spending most of their money quickly instead of accounting for lots of people saving. I thought I’d add it here to see if any other Monzonauts might have a better understanding of the economy as a whole than me.

I read a Guardian article yesterday about a rumour which says that Rishi Sunak might be considering distributing vouchers to all UK adults to help boost the economy. Personally, I’ve got serious doubts about whether this would be true, and if it is, about giving as much as £500 per person away. What caught my eye though was that it would be distributed as vouchers instead of cash. It would make sense as it would allow the government to direct the cash towards certain industries which needed it but the article said it would also be to stop people from simply adding the money to savings and not spending it.

It rang a bell about a news story on the BBC, which said that more people were saving more of their salary each month as a result of the lockdown than before. The story went on to hint that financiers and business owners were banking (no pun intended) on customers spending the money they’d saved as soon as lockdown was lifted.

I get the pandemic has had a serious impact on the economy but we’ve had really bad rates of saving for years now. My understanding was that it was largely due to the low interest rates and increasing cost of living. It did make me wonder though if the economy was built on a reliance of people quickly spending money instead of saving it though. Similar to how any bank would collapse if everyone tried to withdraw their cash at the same time, it relies on a constant stream of money flowing in and out.

I might be connecting two separate things, it’s hard to tell since we’re going through a massive economic shock at the same time but it’s clear many people struggle to save regularly for a long time and I wondered if the economy was built on a reliance of that instead of supporting people saving money to protect themselves long-term.

Edit: just to add, I was more referring to the fact that the economy seems to require us to spend the vast majority of our cash. The BBC article said that households were saving about 8.6% of their income during lockdown which doesn’t seem like a high amount and yet seems to be enough to cause concern (although again it’s hard to say that’s a definite with the whole system struggling from lockdown)

I’ve been wondering whether the economy is built on a reliance of people spending most of their money quickly instead of accounting for lots of people saving.

The economy relies on there being lots of money flowing throughout the system. When money is being saved, it’s not flowing.

The biggest problem is not individual small savers, though. It’s the millionaires and billionaires who are hoovering up money and not redistributing it. That’s why they should pay more taxes - in order to get their money back into the system.

I’ve been wondering whether the economy is built on a reliance of people spending most of their money quickly instead of accounting for lots of people saving.

If you get £500 and shove it in savings, not much happens.

If you get £500 and spend it, the government gets nearly £100 in VAT, and a retailer gets £400. That retailer will use that money to pay its suppliers and staff. Those suppliers will use the same money again to pay the manufacturers of the product. The same money gets spent again on parts in the supply chain. And the whole time, people are taking salaries.

If those people put their salaries into savings, not much happens.

But if they use their salaries to buy things, spend their money in the pub, book holidays, etc, the money keeps on being re used and benefiting more people.

The idea of giving you a £500 voucher is that you’ll start a chain reaction, and ultimately put far, far more than £500 back into the economy.

Clearly, there is a time and a place for saving money, but hopefully you can see how damaging to the economy it is when everyone decides to save all their money at the same time.

Clearly, there is a time and a place for saving money, but hopefully you can see how damaging to the economy it is when everyone decides to save all their money at the same time.

Yep agree that it requires money to flow around but I was more thinking about the amounts here. On that BBC article it’s saying that the current rate was about 8.6% of household’s disposable income was being saved during lockdown.

That doesn’t seem to be a particularly high amount of cash to added to savings each month. It just felt like the economy required us to spend the vast majority of our money instead of allowing for a reasonable chunk to be saved.

The biggest problem is not individual small savers, though. It’s the millionaires and billionaires who are hoovering up money and not redistributing it. That’s why they should pay more taxes - in order to get their money back into the system.

Definitely agree the distribution of wealth is a problem too! I imagine that compounds the problem!

That doesn’t seem to be a particularly high amount of cash to added to savings each month. It just felt like the economy required us to spend the vast majority of our money instead of allowing for a reasonable chunk to be saved.

Yeah, I think that’s a reasonable conclusion. We’ve almost gone the other way if you think about the wide availability of credit, where some people are doing the exact opposite of saving. Near zero interest rates, 95% mortgages, help to buy schemes, have all propped up economy.

It’s a difficult balance to strike. You don’t want a debt bubble to burst, but you don’t want the economy to stagnate, because that means less money for education, infrastructure, green energy, etc - you name it, it suffers.

Except they don’t. The gap between the richest and poorest keeps increasing. The idea that trickle-down economics works or that a rising tide lifts all boats has always been shown to be false. Instead the rich get richer and that’s all. 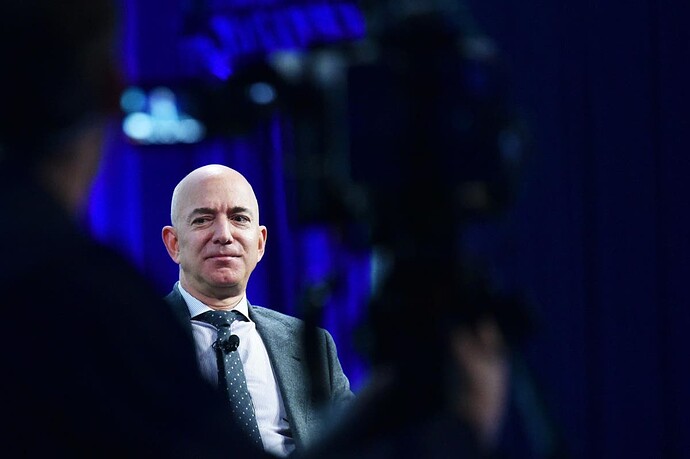 The fund will go towards the company’s partner employees, such as delivery drivers

That still doesn’t really answer the question. Simply attempting to tax people more doesn’t put any money back into the system, it takes money out of the system.

(More so than Bezos, who could could set up a fund himself with just a percentage of his wealth, but instead he tries to get his poor old customers to pay for it instead.)

There was a good episode of Freakonomics Radio during the early stages of the lockdown which spoke about stimulating the economy / the $1200 cheque in the US and a few other bits.

While it doesn’t neccesarily answer the headline question here, I think it does touch on points you are making. I’ll try and dig out a link to the episode I mean, if anyone is interested.

Some good points came up about UBI and how current means tested systems cost more to administer than just giving people money.

I think in the way our current climate is, or rather our current flavour of capitalism, there’s definitely more and more energy and effort spent by Companies in finding the most efficient ways to extract Cash from People; the constant advertising wherever you are, underfunding by the government that leaves Corporations to take it’s place, and just rapid access to anything you want.

It’s definitely a lot easier to fritter away your money in this day and age, than ever before, I would say.

The ‘tides’ are rising for everyone.

“A rising tide lifts all boats”, is the common idiom for this concept right?

Would add “but not everyone has a boat”.

I find it almost wilfully obtuse how you think that the public sector doesn’t count. Millions of employees in the public sector get money back into the economy by spending their wages. Untold millions get back into the economy on large scale contracts of some form or other. It’s an absolutel fallacy to suggest that money taken as taxes just vanishes.

We’ve had decades of capitalism promising that if they get tax cuts and the like then they’ll spend the money better themselves, and decades of proof that this is a lie and doesn’t work.

"A rising tide may lift all boats (except, of course, those stuck at the bottom). But, as we learned over the last year, refloating the yachts doesn't create the tide." Under Presidents Bush and Obama, the Federal Reserve's Chairman Ben Bernanke and...

Richer people don’t spend as much as poorer people proportionally. Their marginal propensity to consume is a lot lower. After a certain point they just hoard wealth and the money does nothing productive. Taxing them and redistributing it around the real economy is a highly effectively way to boost GDP. That’s before you even take into account the multiplier effect.

There was a good episode of Freakonomics Radio during the early stages of the lockdown which spoke about stimulating the economy / the $1200 cheque in the US and a few other bits.

Do you mean this one?

Freakonomics Radio: 411. Is $2 Trillion the Right Medicine for a Sick Economy? https://omny.fm/shows/freakonomics-radio/is-2-trillion-the-right-medicine-for-a-sick-econom

If you get £500 and shove it in savings, not much happens

Savers can be an important constituency.

The recent judgement by the German Constitutional Court against Bundesbank participation in the ECB’s bond buying programme was a case brought by German savers, annoyed that it might be eroding the value of their savings

They could do so if they choose to do it. More likely they would be better off investing it in better public, free at the point of use for others to enjoy.

This is simply not true, do you think millionaires/billionaires just have their fortunes sitting in cash in a bank somewhere like Scrooge McDuck?

They won’t because inflation will just shred through their buying power like a fire through Australia. Loosing out to inflation for someone like Elon Musk equals to millions of dollars in eroded buying power.

Majority of them would be reinvested into their companies they founded that made them wealthy or investing into other companies and places. Meaning their money will be doing just as much for the economy as the masses are at spending their wages at Primark or their local pub.

It always ends up the middle and working classes paying for this stuff, rich people just leave and go to tax havens, increasing the min wage several times the rate of inflation every year would work alot better to get that money back into the economy.

I’ve never got why the government has never taxed unearned income more such as buy to let landlords or capital gains to bring in more cash to get the deficit down.

I am blue colar tho so my opinions must be invalid.

Sadly this almost always has the opposite effect in the economy, companies will just hire less or even let people go.

The min wage was raised above inflation in the UK several times before the corona virus started,

Unemployment continued to go down, it just shows its greed by both the goverment and employers.

I wonder how many of those new jobs are minimum paid ones?

As far as I remember, when the increase came in a lot of retailers had a fit. Especially small, independent stores.