How do you handle subscription free trials that you don’t remember to cancel, as an example?

I cancel them. If I don’t then they’re within their rights to charge me. It’s very deceptive of you to sign up agree to pay but keep your balance purposely low so they can’t if and when you forget.

No, when I sign up for a free trial, it’s a trial, not an active subscription. It’s companies that then overreach thinking theyre clever and start charging you if you forget to cancel. So they can’t collect the money and the subscription ends at the end of the trial and that’s fair. They’re the ones engaging in abusive business practises

But actually, most often I don’t even worry with the account, I use use disposable virtual cards for each purchase with a set maximum limit or monthly limits if it’s a subscription I want to keep.

I must be on a different planet where free trials online work differently as they generally tell me (explicitly) that I’ll be charged after the trial automatically.

If there was a shady business that insisted they give a free trial without an active subscription then I’d be getting my money back but I can’t recall of any business that’s done this.

A “trial” is for you to try the service, it’s not a subscription in itself. The idea is exactly that if you like the service you tried, you then subscribe. That requires active user action, which is the exact opposite of start charging you if you forget.

Here in Portugal the law is pretty clear about that, that’s why Portuguese companies don’t engage in that kind of start to charge you if you forget mentality and any company servicing Portuguese users will have to abide by that, tough usually they don’t and I have to ask them for a refund, which they’ll give because they don’t want to get in legal trouble. I prefer to avoid that if possible, so I just use virtual cards.

But the most important regarding overdrafts is situations in which as it happened to me just recently, Amazon randomly tried to charge me 50 Euros by direct debit. I would be pretty pissed if the bank had automatically let me go into overdraft and started to charge me interest

Amazon randomly tried to charge me 50 Euros by direct debit. I would be pretty pissed if the bank had automatically let me go into overdraft and started to charge me interest

Proof? I’m almost certain this didn’t happen and you’ve created a story to support your argument. Amazon aren’t in the business of randomly charging people money.

I’ve obviously deleted the emails as the situation is solved, but everyone can check for themselves. If you need any warranty service from them, they’ll most often just send you a replacement and tell you to keep the old one.

A month later they’ll start randomly trying to charge you multiple times, I suppose because they didn’t receive the old item they said they didn’t want back. It seems to be an automated system and it seems the guy who says I don’t need to send the item back, forgets or is unable to disable it.

After complaining they’ll say it’s a technically error, and it won’t happen again, tough it invariably will happen again and they seem unable to stop it.

First time I had this happen years ago it was a mess as they charged me and refunded me after I asked 5 or 6 times until the charges stopped. From then on, I have an account specifically for Amazon where I don’t keep any money. I still send them emails complaining about the situation but as they can’t charge anything I don’t worry about it

I’ve obviously deleted the emails as the situation is solved

They actually more often say to me they’ll send a new one immediately, making me agree to be charged if I don’t return the old one. Looks like someone has hot a pretty good system running to rip Amazon off.

So you acuse me of lying, then of ripping Amazon off? So which is it? And it’s not just Amazon, if you shop online as much as I do, you’ll have trouble with payments at least a couple times a month on average. Funny that you accuse me of saving everyone’s time by ensuring non warranted payments don’t go out in the first place, like if that was a bad thing

Maybe you’re the one abusing their system as if you are honest and have a low return rate, they’ll tell you to keep the old one. Why would they need a broken product and have to pay for you to ship it back? Why would they want to have to pay me the 20 to 30 Euros it costs me to post a broken product to them? Only if they suspect the old one is good after all. You probably have over 10% return rate for them to do that

That’s fine that’s what debt collection agencies were designed for. You WILL have to pay one way or another.

Especially when they start charging you for them to drop letters through your door and court costs. (Yes you will be called to court to explain yourself.) If you still don’t pay they will go to the high court and be granted the power to take away your goods to pay the outstanding debt. Your car and or your household goods.

No I won’t. First of all, here in Portugal debt collection is not an authorized activity and no one may charge me for sending letters, that’s ridiculous. The bank may certainly go to court, where they lose as there’s no lending contract.

For a loan to be made there has to be a contract signed and agreed by both parties, which is what you have when you arrange an overdraft with the bank. On the absense of it, they have no legal claim to any supposed borrowing they decided to engage in without my consent.

Believe me that I know it. Fighting disingenuous companies on behalf of family and friends is something I have to do very often.

You was replying to someone in the UK, so you talking about how you could just ignore the charges and think that was the end wouldn’t wash in the UK. (I’ve said why as above) As the OP was talking about when he was debating with you.

Well then again it might do but that’s only if in addition to everything I’ve said above you don’t need any form of credit for 6 years. A default is one of the worst things you can have on a credit report.

I’m not saying things in the UK are equal, but certainly the UK is not a lawless place and if someone throws me a bill over my window and then asks for it back + interest Im under no obligation to pay. It’s the same situation here. If the bank decides to “borrow” me money I didn’t ask for or agreed to any general terms or contract, I’m under no obligation to pay it back

Trust me UK banks have your argument sorted, check the T&C. You would come unstuck very quickly. As some banks allow you to have a unauthorised overdraft
but just because you didn’t ask for it, oddly enough does not get you out of paying it back. Nice try though.

they’ll most often just send you a replacement and tell you to keep the old one.

I had a warranty dispute with Amazon. Neither of those things happened.

Of course, without the first, the latter won’t happen. As for them asking me to keep the broken product, it may be because I’m in Portugal and they don’t have shipping labels for me to send products back, thus having to refund me costs directly? I also buy a lot from them monthly, a lot by most people standards. I tought it was generalized, but maybe that’s why their system then can’t cope with it

You’re not making much sense. If it’s in their conditions and you agreed to it, then you agreed to it and a valid contract exists. Otherwise they obviously have no claim to any money they decide to borrow you. The talk was about entering into overdraft without any being arranged with the bank

So you first claim banks would let you into overdraft without knowledge or consent, now you say after all it’s in their T&C’s all along…

T&C’s are a binding contract you know

It’s called a unauthorised overdraft. Look it up. 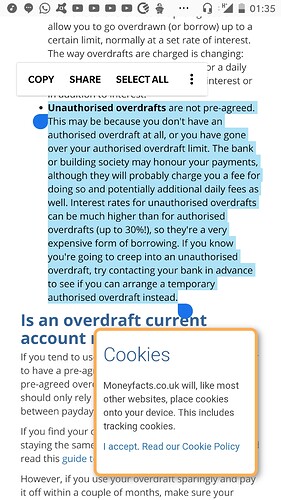 I was bored so decided to do it for you.

So you just said overdraft situations were covered in bank T&Cs, then after I called out how, obviously, T&Cs are in fact contracts agreed by both parties, you then go and search a random thing online because apparently you want to debate semantics.

According to what you previously said most UK banks have on their T&Cs clauses where they address the possibility of entering into what your image calls an “unauthorized overdraft”. Guess what, that’s a contract, if you signed and agreed to it, they can do it.

What you originally started to debate about was a bank just letting you go into overdraft, be it an arranged one or an “unauthorized” one (bad terminology) where such situation wasn’t addressed in any contract you have with the bank. In that situation, yes, they can’t claim any money back and you did nothing to disprove that

Why don’t you just stop embarrassing yourself?

Why don’t you just stop embarrassing yourself?

After trying to grasp for fake arguments thus far, it seems you finally not even that can manage. Just be honest, it’s easier