I wish I had the same enthusiasm and motivation you have for this stuff! Me? I just turned to plants. That’s my hobby now. At least one of the Monzo Plus offers turned out to be quite useful for me after all!

And could be available on the free tier? This would allow people who don’t want Plus/Premium to also ‘connect’ their accounts into the app, albeit on a manual basis.

I’d love this, but I can’t see it happening (in the short term - I’d hope that free customers get more once profitability has been achieved). I still like the multi-tier idea, though, with limited connections for those who are #fullmonzo.

More than along the right lines. Absolutely needed. And nicely thought out/mocked up.

This will probably need more than one post. But let’s start with the basics: there is a whole bunch of stuff in the app that doesn’t really integrate well with each other or (in many cases) doesn’t really have a permanent home in the app. For example, we have budgeting (which you get to from the Summary screen) and salary sorter and end-of-period sweeps that only appear in certain circumstances and which need manual intervention. 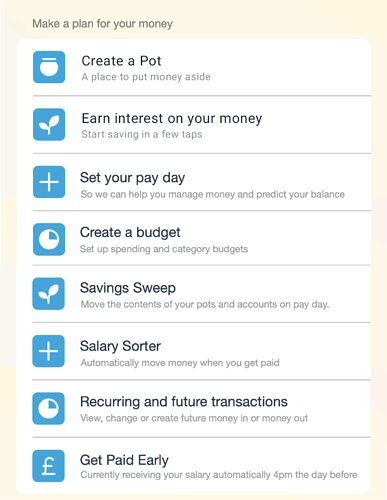 Before we get to the detail, a quick (important) aside about the Accounts screen:

Like a few things in the app, the accounts screen seems (to me, at least) to be a little inconsistent in its approach. It boils down to the “Your Account” section, which is relevant to only one of the accounts of the screen - the Monzo current account. It would make more sense, and be intellectually consistent, to move those options to somehow be on the main feed screen, leaving the Accounts screen to cover things that are global. To return to the previous suggestion, making it a tab in its own right (or even the ‘Home’ screen) would clarify that hierarchy.

That said, here’s a brief explanation of the mock. Because it’s on the accounts screen, I’m assuming that everything that sits under the buttons would apply to all the accounts hooked into the app.

Does it feel right to get the Accounts screen to do the heavy lifting here? Anything missing? Superfluous?

Keen as ever for thoughts!

This is fantastic stuff - and well on the way to more consistent, refined and logical grouping of the many banking actions possible. I hope

are keeping a close

on this set of winning ideas.

So previously, I suggested a big tidy up of the UI, and to put budgeting features in an easy to find place.

I thought, though, that now is the right time for a deep-dive into ‘recurring and future transactions’. But to do that properly, let’s step back and look at what problem we’re trying to solve.

We’ve seen from polls that the Left to Spend figure is really important to people. But we’ve also seen lots of folk wander onto the Community confused about what the figure means. It’s confusing for two reasons: firstly it’s not really clear what you’re looking at and what the various figures mean (I’ll come back to how to better present the different forms of balance in a separate post). Secondly, and perhaps more importantly, the Monzo app goes some way in predicting future spend - but doesn’t get it right, and doesn’t let the user have total control over their future spend.

To solve this, I’m suggesting that again we take some of the functionality that currently lives in Summary, polish it up properly and (in this case) significantly add to it. We’ll also need to find a better, more natural home, in the app.

(Mocking this one up is complicated. I think it should somehow be accessible from the feed, rather than a separate place in the app. I think @davidwalton was on to something, though - it just needs to be done elegantly in a way that can show/hide future transactions without introducing too much ‘busyness’ to the app. So this is me saying maybe a mock in the future, maybe not…

Seriously, the amount of thought and effort that goes into these posts is commendable

There are a few key points to this and I’m taking cues from YNAB here, as the web version does it so well.

This means the feed takes care of Left-to-spend as of ‘now’ and can be interrogated to show what will be available in the future. Summary is then used for looking backwards at what has historically happened.

This is really good! I will wait until I’m at a computer as quoting different bits on a phone isn’t easy

(Mocking this one up is complicated. I think it should somehow be accessible from the feed, rather than a separate place in the app. I think @davidwalton was on to something , though - it just needs to be done elegantly in a way that can show/hide future transactions without introducing too much ‘busyness’ to the app. So this is me saying maybe a mock in the future, maybe not… 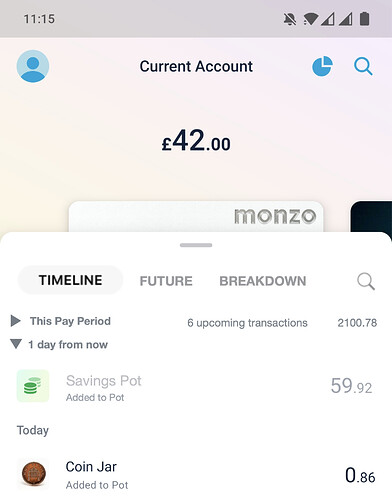 Flash poll! Without reading further, does this make sense?

Having had a brief look at @davidwalton’s excellent post, I think this’ll need a tweak, but here’s my thinking:

Just so I’ve got this right, the idea is that each item in the feed (past or future) would have a running balance next to it? And the future ones therefore let you know what your spendable balance at that point in time would be?

What balance would you want as the main balance? One that shows the running total for today? Or the figure that is for your unbudgeted spend until the end of your budgeting/pay period? (Or are these questions constraining thinking somehow?)

Yes, the Running balance is super important. The main figure at the top kind of becomes redundant if the transactions show a Running balance (even more space up top recelaimed - maybe have a Pulse there? I’ll get me

The running balance shown in black by the very latest transaction is what is in your account ‘now’, so the top-centered £value shown in the mock-up could be a left to spend or budget figure, or even removed.

The calculated running balance for future transactions would indeed show you what would be in your account if/when they happened - so you could select a future reporting period of any duration and see what you’d have. This, coupled with manual transactions, allows a ‘what if’ feature.

I really like all these ideas, hopefully Monzo may pick up on some of them.

How does Emma do it? Can you add manual transactions the way that @davidwalton has suggested?

Emma tracks all your standing orders and direct debits across all accounts, it shows them in a list and also shows what it upcoming and also helps to indicate if you’re going to run into your overdraft or not have enough money to pay for it as well.

You can also add any recurring payment eg card based subscription to that list as well.

Just too add, you can manually add accounts and payments and withdraws in the paid version. It also shows graphs across all your accounts, savings and investments.

If you get past the way it looks, it’s quite useful but I wish that was in Monzo

So here’s a tweak: 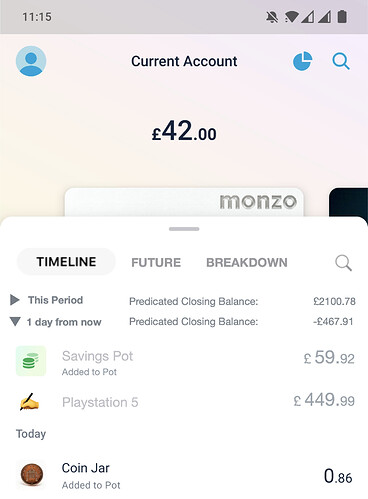 emoji). I suspect that this might be the most technically complex bit: exact value matches should be okay, but fuzzy matching might be more interesting to calibrate…

I deliberately haven’t put a running balance under every transaction - I think that would make the feed too busy. But I think having it on the transaction screen so you can tap on a transaction and see the balance at that time would be super cool and should definitely be done!

I think for me, problems are stemming from keeping the current feed interface as is and adding too many buttons, toggles, and information to it, that it’s gotten a little unruly and overwhelming. In essence, it’s significantly diminished glanceability.

I like a lot of your ideas, but I think they would require a fundamental redesign and restructuring of the feed interface in order to be implemented in a really nice and coherent way. With the way things currently are, this just adds too much complexity for me.

A time machine feature of sorts I think would be interesting to build into the interface where summary currently exists, and actually replace it. Or perhaps it could be accessed by swiping right on the cards pane at the top, rather than trying to bundle it all into a single feed interface.

I would agree that you might not want this level of information on the main page or possibly you would want this to be something you turn on as an overlay .