and not just to reduce bank charges, some cash heavy industries like hairdressers and taxi firms often do it to make it look like they earned less and then defraud the tax man by declaring less earnings. I read a few years back if these industries were banned from using cash there will be millions of extra revenue collected by HMRC each year

You can’t deposit physical cash into the preview account.

The question at the July Open Office:

Hi. I hate cash as much as the next person around here but we can’t avoid it. Is there any plans to be able to deposit cash into the account?

Yeah, probably in time, like, we’re not working on it right now. Our major focus is to get the current account to everybody. The way you would do it is basically take a service from the post office or someone like RBS where you can go into a branch and give them cash and fill in a slip. The Post Office is a service, it may come with a small fee, and if enough people really want it then we will do it. I’d lie if I said it was on our priority list in the next three to six months but yeah sure. It’s just a very high money laundering risk as well. People who deal in a lot of cash typically, not typically, but more often [audience laughing] more often the average person are involved in tax avoidance. Evasion, evasion is the illegal one, right?

I am sure at one Open Evening they spoke about posting the cheques to the Monzo office?

For now, drop us a message through in-app chat of the current account app if you’d like to try the cheque flow.

Thanks watched the whole video but good to know about cheques. Really enjoyed watching the q and a.

Has Monzo sorted out a way to pay in cash to the account yet?

It would be very handy for me

I’ve moved your post here as Kevyn’s post earlier in the thread has the latest update from the team on this. I hope that helps

In case you’re wondering why Monzo’s made that decision, it’s not because of a lack of opinions / options that users have discussed before! Please feel free to add your thoughts but bear in mind that there’s a good chance that your use case has already been mentioned in one of the posts that I’ve listed here -

To save anyone repeating themselves, the different options for depositing cash have probably been discussed more rigorously in this community than by the Monzo team (a search for PayPoint finds 21 separate topics) so it might be worth checking out those threads & adding anything that’s been missed (if that’s possible) here. For example -

So the answer is ‘maybe.’ That’d be great if I didn’t earn most of my money through ash (I’m a private tutor).

I guess I’ll have to keep my other account so I can pay in cash, then transfer it across. That’s a shame, as I’d like to let me other account go after the trial phase.

Paying in cheques is a pain and usually involves me going to a cash machine at night, then finding out it doesn’t work. Is cheque imaging something that could be considered especially given the lack of high street presence?

Cheque imaging is not currently possible with the UK clearing system, but (very) soon will be. It has been discussed in another thread, and this link has full details, including dates:

Now, the above is about the clearing system (how banks exchange cheques between themselves and settle the amounts) so does not say anything about how we will be able to deposit cheques. But once cheque imaging settlement system is in place, it would be possible for Monzo to simply collect an image of a cheque instead of the cheque itself, so we can hope that such a function is added to the app. Presumably long-term this is less labour- and cost-intensive for Monzo than us posting cheques to them, so we both win.

I remember reading somewhere there’s an address to post a cheque to so I can get it paid into my Monzo account. Can someone please remind me of the procedure, address, and what details to include? 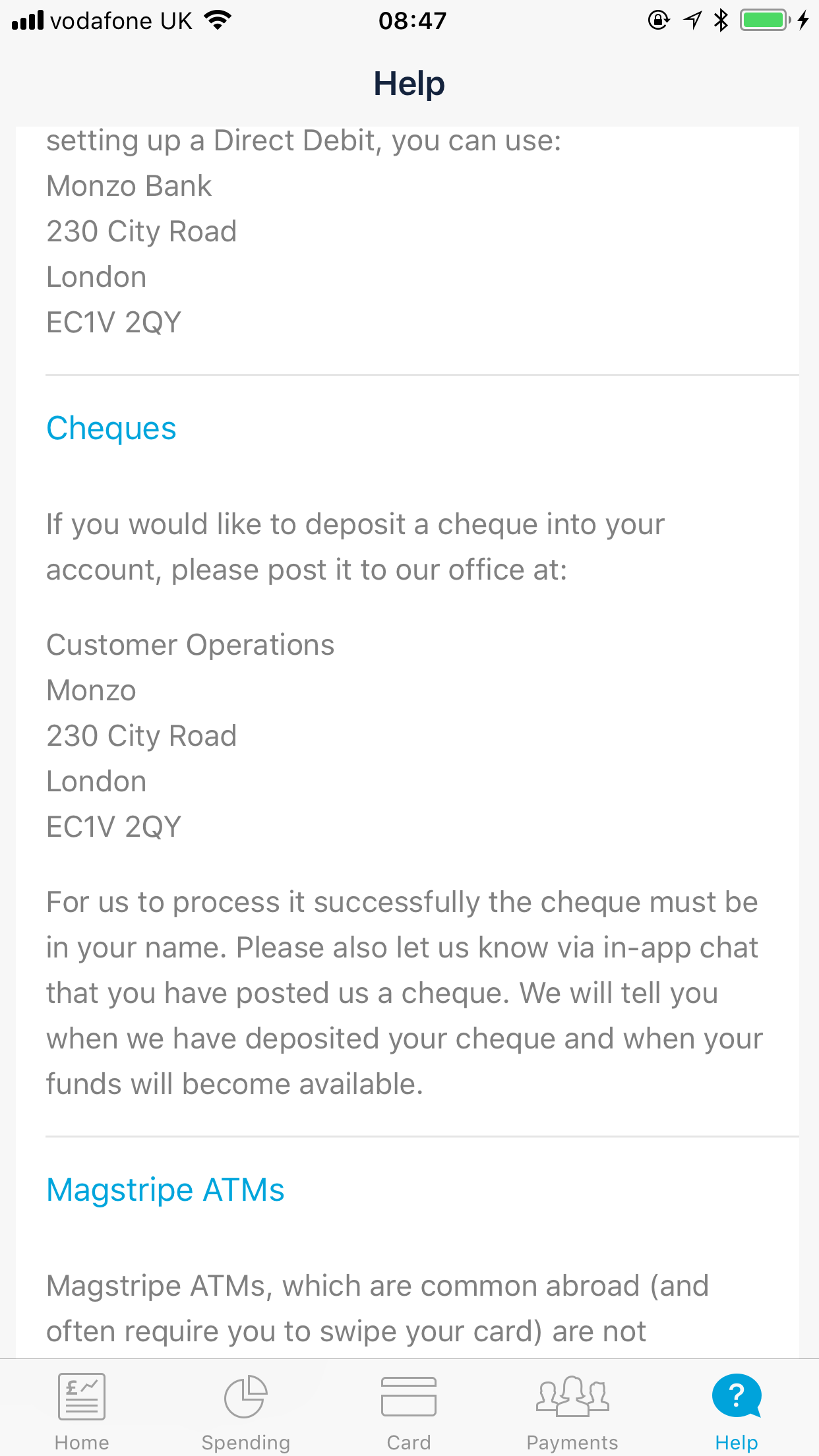 I would be interested to know how many cheques Monzo is cashing? They are very archaic but still surprisingly popular

I do hope Monzo offer the service through the Post Office. Many relatives of mine live far away and any birthday/Christmas money they send is often in cheque/cash form.

I planned to post a Crossed Warrant (like a cheque) to Monzo but decided to deposit it instead at the Post Office with my legacy bank instead. Didn’t really want it to get lost in the post.

I also hope that monzo do allow us to put cash in our accounts, as if I’ve got money laying around I like to spend it so much rather putting this in my bank even something like paying in at a legacy bank or post office would be great

Do cheques posted to Monzo go through the standard 5 day clearing process or have they moved to 24 hours?

Cheque imaging goes online on 30th October, although the press releases have been less than forthcoming on how big the rollout is (‘some’ banks could be 2 branches in London for all we know…).

Hopefully Monzo get in early so there’s less of this mucking around with post. I’d rather sit on a cheque until it’s ready at this point… they’re valid for 6 months anyway.

Afaik, Monzo don’t actually process their own cheques. If you look at the FPS website: 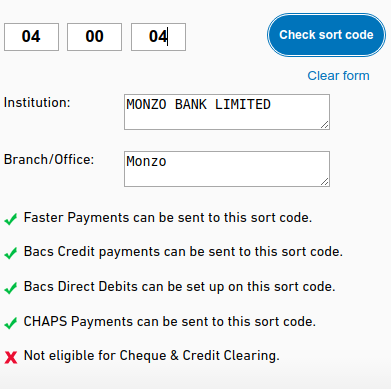 So, unfortunately I don’t think it will be up to them as to whether they do this or not

(Also, I would guess the reason they don’t clear their own cheques is down to security: you require a large machine and dedicated connection plus physical building security to actually clear cheques)