Would be really handy for me, and I’m sure others, who are tracking their spending, as at present its saying I have spent an amount (let’s say £100) on food, but because other friends with Mondo have then sent me money to “split the bill” this is now an innaccurate amount, and realistically I’ve only spent half that (£50) on food for myself.

If anyone could shed some light on how the function will potentially work, I’d be interested to hear it!

Sure, bill splitting is on the roadmap and here are some previous thoughts about it:

Thanks for the idea, we do want to build a nice use case around bill splitting (notifications, shared receipts, etc.). It’s on our roadmap

Bill splitting is definitely on the roadmap! It would be so great to be able to quickly split a bill with friends (a la Uber) and they can pay with a couple of taps.

Link debits and credits together

So we’ll likely have a way of P2P payments being linked to a transaction (so we can do bill splitting seamlessly) but for now that’ll be with other Mondo users only. I’m not sure about doing it from the top up though – maybe the solution is to get your whole office on Mondo?

…perhaps something like Uber’s fare splitting functionality, where you could split the cost of that meal with another Mondo user (merchant still gets a single payment from one of the card holders, but the app settles the difference between the 2 friends)

Pay at retailer
Tap split bill
Select friends (index by phone number in contacts + email + maybe a mondo username? QR Codes like snapchat has?)
The payment appears in friends feeds, they can either tap accept, touchid to pay, or decline

Maybe something interesting would be geo location of the sender and the recipient shown on both ends.

Perhaps the UI could look something like this concept UI by Brian Plemons on Dribbble: 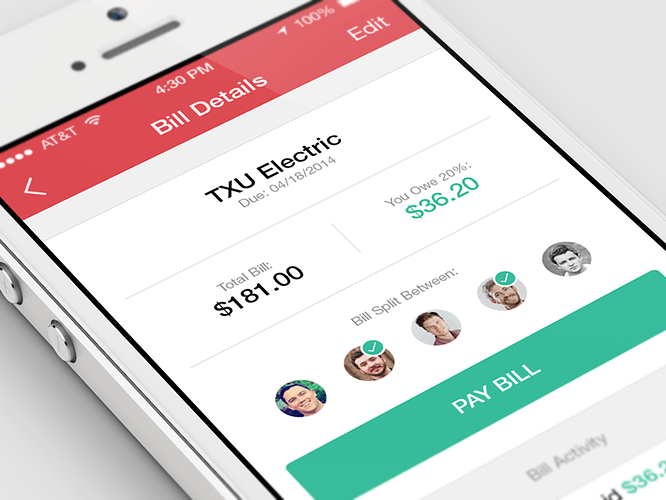 Any plans on extending the bill splitting to buying tickets for things like cinema/theatre and flight. E.g.
User selects tickets from a vendor and pays with mondo. Within mondo you can split cost and makes a request to friends mondo or other payment gateways?

This is only for splitting the amount evenly - which isn’t always the case for my spending.

So, in addition to even split - I would like to have a slider for the remaining amount, and then being able to assign a specific amount to a contact. With all the amounts assigned showing as a pie chart (where I would always see my own share with a fixed colour (set in user profile, defaulting to something reasonably unique).

I imagine this being very useful when it comes to paying the bill at a restaurant. Will it support that kind of use case?

A bill splitting feature would also be important for budgeting. If you use spending tab as a way to budget yourself you don’t want to include spending on things which you’re going to get the money back from your friends.

So as a slightly separate feature, I want to be able to say that only 50% of my bill is my own spending and this to be reflected in the spending tab.

Yes, it’s the next feature that’s due to be released for iOS, according to the roadmap