You now only need £10 to open a Monzo Savings Pot

Fixed term and notice accounts are different, and both fairly established.

Fixed term - The rate and duration both fixed from the outset.
Notice - Variable rate accounts with no fixed duration, but you have to give a certain notice period (which varies from account to account) when you want to withdraw any money. In the case of the account mentioned above you would have to wait 95 days before you can access your money once you give notice.

Can I ask what the appeal of these pots are over higher interest savings accounts? You can get better rates from other providers, so why do you prefer to use pots with lower rates?

I don’t keep a huge amount of money in easy access cash savings. Just a few thousand as an emergency fund. With this amount of money the difference in earned interest between the accounts available in Monzo (~ 1.15%) and the market leaders (~ 1.45%) only amount to £10-£20/year. For that minimal gain I can’t be bothered to open an account with a different bank at which I don’t already have an account.

If I was savings tens of thousands in cash I’d go direct to one of the market leaders.

Maybe there is enough of us now paying in salary et al that they have shifted the ratio?

Our ISAs are definitely flexible, it’s mentioned in our ‘What’s an ISA’ screen (shown next to the list of ISAs). I believe it’s also mentioned in the terms too. However I agree we could definitely be clearer with this as it’s a huge benefit. It effectively means you have free movement of that money without losing your ISA allowance for that tax year. Here’s what the ‘What’s an ISA’ screen shows: 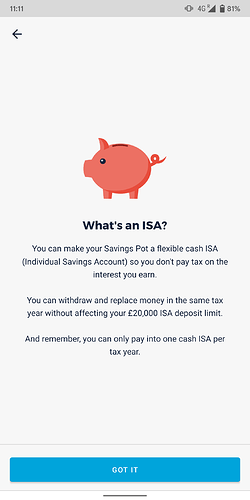 I love the one day wait time…
helps stop just dipping in.

I hate it, it’s the only reason I don’t use the pots. Not sure why Monzo keeps around arbitrary one working day legacy rust.

Been a while since we heard legacy rust

its all choice
some people want to get there money now
some wish to have a delay to help budget.

its great to have choice in Monzo for both

What savings pots have instant withdrawals? I don’t see any choice.

Normal Pots, yes i know they do not have interest.
but my point was not talking about interest.

Thanks for the response.

This applies to the screenshot you have shared. I think on screens like this you need to provide an explainer for “what does flexible mean” to make it clear you are really referring to flexible ISA rules rather than easy access terms. Most banks provide much better clarity than Monzo on this.
[EDIT - Just read a bit further down the screenshot and now realise there is reference to withdrawing and replacing money not affecting the ISA deposit limit. However, I think it would still be useful to start thi sentence with “What does flexible mean?”]

Also, when I am in the app, I don’t see a ‘What’s an ISA’ link next to the list of ISAs. As such I don’t seem able to access that screen.

Is it possible to make terms and conditions for the ISA accounts accessible via the community for the time being, at least until improvements are made which makes them accessible in-app in advance of account opening?

Does the new interest pots qualify as part of the 1.5% interest received if you have Monzo plus upto £4K

No the interest pots are held externally to Monzo so don’t form part of it.

Worth noting Monzo are not offering interest via Monzo plus now

Similar for when they were using ‘instant access’ when they initially released savings pots. They need to be clearer on their language, sometimes.

Hey Emma, this is part of the reason it took us longer than we liked to reduce the minimum deposit. We ran a bunch of tests reducing the minimum deposit for some users to see how the behaved with Monzo and our Savings Pots over the long term. We’re happy to go live as we’re confident we can balance the ratio with the increased amount put in Savings due to this and other changes.

Thanks for the information Indi

Now I can have all my savings pots with interest. One issue for me resolved, because for some it’s not that easy to start saving with £500 right away. This will help to get there. Thanks!