If I was aware of other services that offer similar features, I’d be more than happy to try them.

If investments are something you think you be doing long term. I’d highly recommend reading about how fees effect compound interest over the long term. Someone did a guide here a few months ago, I’ll see what I can find.

Plum is expensive for what they do. They take a quid, plus up to 0.9% platform fee and an extra 0.15% for their own pockets. There’s no two ways of looking at it, that’s a lot!

I’d recommend reading up on a Vanguard Lifestrategy or Vanguard Global All Cap ETFs. If they meet your risk palate they’ve both proven to be good performing, resilient funds.

Edit, here’s the post: A lil' doc to help you understand savings and investment

There is a Facebook group for plum, a lot of people on there have small sums invested and aren’t actually making enough to cover the fee by the looks of it. I think plum could do a lot more to explain the fees.

Frankly the fee should be £1 or 0.15% whichever is higher if they need to cover the technology cost. Doing both is just bad.

Seems like it would be easier, cheaper and better to just use Chip and move the money about manually or wait for ChipX.

Frankly the fee should be £1 or 0.15% whichever is higher if they need to cover the technology cost. Doing both is just bad.

Just to be clear, Plum’s revenue is the £1 fee only. The 0.15% fee is passed on to the customer at cost which is explained on their site. 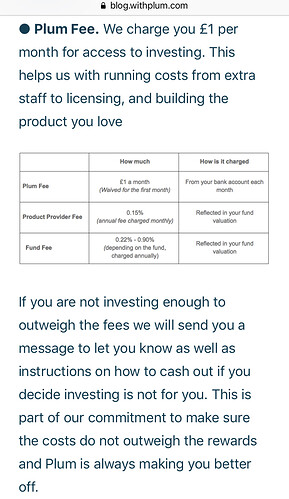 a lot of people on there have small sums invested and aren’t actually making enough to cover the fee by the looks of it. I think plum could do a lot more to explain the fees.

They send an alert

As always, users need to DYOR and due diligence. Most of the time the info is all there if one only took a little time to look for it, but as we know the average person may not do this for whatever reason. To those of us on forums, it’s obvious to read the info on websites, read the blogs and skim read Terms & Conditions, but to others they don’t even think to do these basics which baffles but doesn’t surprise me. There must be shared onus on the individual as well as the provider; there’s only so much companies can do. 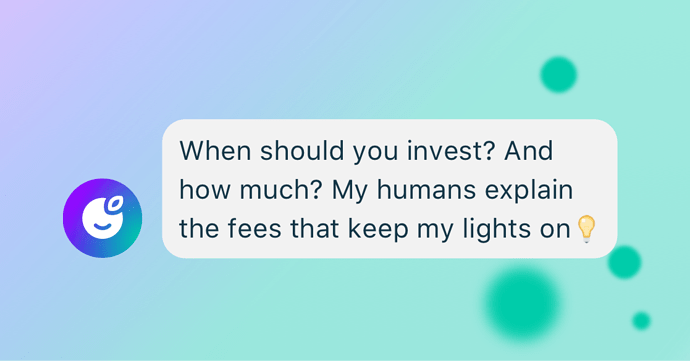 Is investing right for me?

In this article we go through a checklist to help you decide if you should invest and some things to keep in mind. 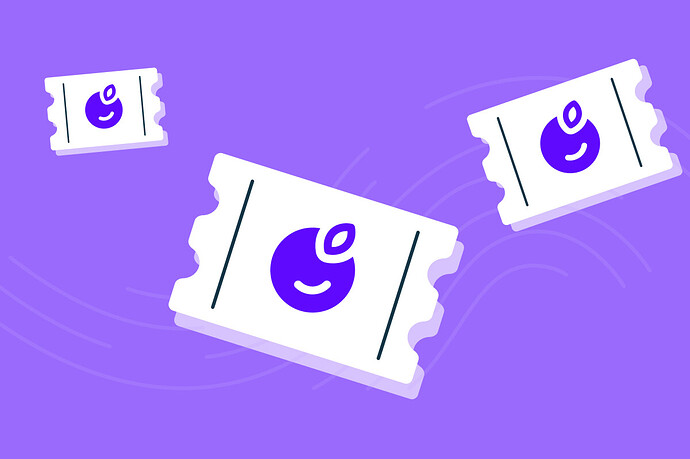 Is there a fee to invest with Plum?

Thank you for the heads up, I’m aware of Plum’s fees and it’s definitely something I will keep in mind if I decide to stick with them.

So far the fees haven’t outbalanced my investments. Even with some negative earnings (the last few months haven’t been the best for the stock market, have they?), I still see a growing balance that I wouldn’t even have saved otherwise, let alone invested.

You could argue that I could still use Plum for automated saving, then move the money elsewhere. You mention Vanguard funds, which is exactly what Plum offer among others – I agree it would make perfect sense to cut out the middleman. For now, however, I like the simplicity of the process and I commend them for making investing so approachable to beginners.

I did read @nikimukhi’s guide, in fact I wouldn’t miss an opportunity to thank them yet again for the brilliant effort and generosity in sharing their knowledge

Plum briefly managed to overtake Monzo in the iOS AppStore and has maintained a top 10 ranking for a few weeks now: 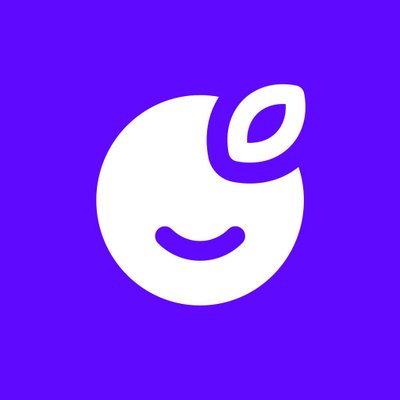 Are we still dreaming?? Nope... we really are the No.5 finance app in Apple's UK store 😍 Don't worry Android users 🤖 We're coming for you very soon! https://t.co/nl6me64Piy 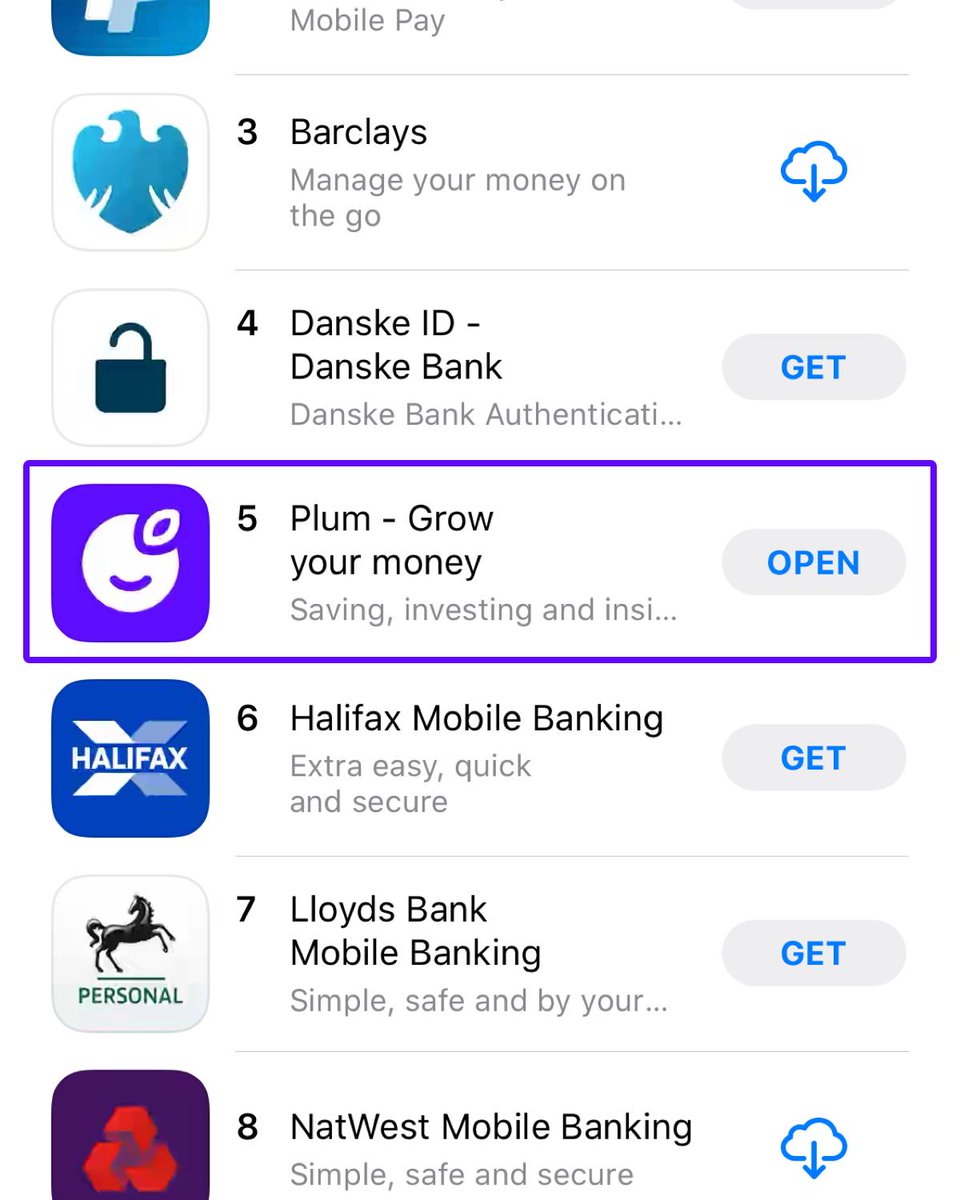 Since we launched three years ago, we’ve been on a mission to make everyone financially better off 💪 Now we're bringing Plum to an even wider audience, through our first-ever TV ad 📺 Watch it here 👇 youtube.com/watch?v=xrLrgH…
tbutz (🏳️‍🌈 Tangfastics addict since 2017 #TeamSunshine) 21 April 2020 14:25 #78

Is anyone else making use of Plum?

I joined a couple of months ago and was thinking it was a bit lacking in features, but I’ve since discovered that there are 2 paid tiers, £1 per month gives you access to the investments feature, whereas £2 a month gives you investments plus other saving features (52 week challenge, rainy day and who knows what else) plus “pots”.

I’m not keen on spending that, when I could get investments for free(ish) via Wombat or savings features/pots free via Chip. Am I just the wrong fit for Plum, or am I just too cheap for this kind of thing?

I’m using Plum after a recommendation from @gmclean

I use it for a small bit of investing but mainly as way to try and save without thinking about it. It fits quite nicely alongside my Monzo IFTTT integrations to help me save without realising.

I like the fact that every week it works out what it thinks I can afford to put aside and it seems to learn as well. I then use one of their splitters to cipher off a bit of each savings into their investment funds.

It’s a nice simple easy way to save and invest without doing anything at all.

I think how useful it is depends how useful it is on how you manage your money, I don’t have the most willpower when it comes to budgeting so Monzo and Plum help me to save because i don’t need to think about it nor see it, when I manually save I always know it’s there and how much so if i need it I take it, however IFTTT & Plum work on their own which allows me save with no brainpower at all, as well as that they’re not visible every time i open my banking app which allows me to forget the savings exists which in turn stops me from relying on it as much.

Plum is hidden in a folder on my home screen with all notifications turned off, it works well for me that way, I don’t remember the last time i opened it.

Thank you @Addzy, that’s a great reply. Perhaps I was expecting too much from it, whereas if I just look at it as more of a savings tool and nothing more it’s doing exactly what it’s meant to do. I’d avoided the investment side because I don’t think I’m putting enough away to justify it, but perhaps I’ll give it another go.

I’ll also consider doing as you’ve done and hiding it from view, as me checking the app so frequently doesn’t help matters…!!

It’s an app now. I don’t know if you can still use the FB Messenger part. 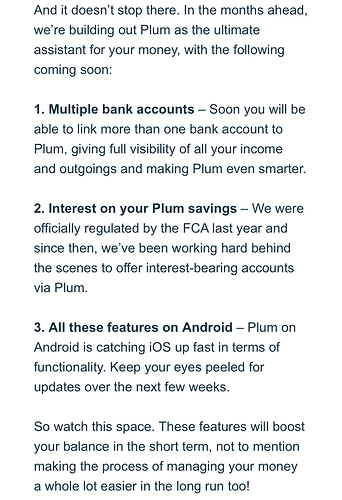 Oh I’d not realised they were FCA regulated last time I looked last year there weren’t, I may check them out again now I know that

I’ve downloaded the app and set it up, what I don’t like if the Money Lost feature showing on the main tab in red under my current account it claims EON could be overcharging me and it could get me a cheaper deal.

So I click on the link to have a look and it does me a comparison against Octopus saying my monthly payment would be x amount, it’s based this on pulling a magical figure out of thin air. There’s nowhere within that calculation to tell it what deal I’m on right now and what my actual usage is, it’s guessing usage through my fixed payment to EON.

Can’t see anyway to switch that off from the main page as it’s rather annoying to see, they have a full tab where there curated deals are for customers so no need to be annoying and put it on the main page an all.

Yeah tbh I the ‘lost money’ and ‘invite’ tabs are redundant to me, but never really an issue as the app just works in the background for me. Thinking about it I’m surprised “invite” gets so much real estate when they have other features like premium versions with investments that would be better placed there. I’m hoping that the updates above will bring a facelift to the app so that it gives me a reason to use it more other than to check my autosave balance now and again. Overall, happy with it since inception and looking forward to the Openbanking multi-account money dashboard play.

I’m guessing this is in iOS?

Really? It’s not showing in my app and I’m on iOS.

Edit: cool, had to update app first but don’t see the interest part?

Try going into Savings and create a new pocket