Yes…break even as a whole across ALL the ATM transactions they have, not per individual transaction… So that still means some users losing out if the 3% option is selected instead of the 1%/2% option

Yeah, I voted for option 1 too (with the CEO of the bank) but I’m taking issue with you conflating subsidising ATM fees across the whole customer base to “making money”. That is disingenuous, as was pointed out to you earlier, and implies Monzo are lying in their intention.

Anyway, irregardless of our opinion, the vast majority of Monzo users who voted felt the free £200/3% subsidy model was the best, after, I’m sure, considering all the arguments carefully.

The way you state that this is the way it is happening is a little disingenuous.
Monzo haven’t announced which option they’ll be taking forward so actually we don’t know - it could be option 1, who knows.

But users have voted for the 3% option and not the 1%|2% option Tom etc favoured. Now a bit like the Brexit vote will they ignore that or follow it? I doubt after putting it to a vote that they will then ignore that vote

subsidising ATM fees across the whole customer base to “making money”.

I never said they were making money out of all customers just that if they go for the option voted for the users withdrawing in Europe will be paying over the odds while users in rest of world may be paying less than they incurr the bank…so they are making money out of certain users with that option while losing money from other users yet overall they not making profit from it, but those abusing the option by just withdrawing their free allowance are benefiting while Monzo profit from others in order to subsidise the free withdrawals

There are no plans for a monthly fee. They plan to make money other ways such as overdraft fees and charging 3% for overseas cash withdrawals.

subsidy model was the best, after, I’m sure, considering all the arguments carefully.

I am sure they did NOT consider it carefully for the benefit of the bank, fairness to all, impact on income depending on take up of free allication only, etc, but purely on their own personal gain and benefit

That might have been more acceptable had the result been much closer, but with almost 2/3rds of the votes indicating a clear favorite I think Monzo would lose much of their credibility given the statement made when the poll was posted:

Don’t forget, the poll is designed to be indicative — if there is a clear winner, we’ll choose that option, but if the results are all relatively close together, we may make a decision taking into account all of the discussion and feedback, as well as our long term vision for Monzo.

People that voted Option 3 clearly haven’t been on here long enough to realise that the prepaid card is going, also Monzo should put some caveats into the account i.e. minimum balance over x period to get rates or x spent in the uk… something that prevents it just being used for travel.

I wasn’t seriously suggesting they do, just saw the joke there and had to take it.

Trust me, I never took it seriously

The revised ATM fee terms and conditions are a compromise in my opinion - so be it.

Anyway, I’m very happy to continue to use my Monzo card (prepaid or current account when activated) for POS transactions etc. where no fee is involved.

As for ATM usage - is there any way in which Monzo can flag up, immediately in advance of withdrawal, the maximum amount in the appropriate local currency that can be withdrawn before reaching the £200 threshold ?

One further question, if the ATM transaction works out to be just over the £200 - is the 3% applied to the whole sum taken, or just the amount over and above ?

As for ATM usage - is there any way in which Monzo can flag up the maximum amount in the appropriate local currency that can be withdrawn before reaching the £200 threshold ?

I believe this is something Hugo is looking into

One question, if the ATM transaction works out to be just over the £200 - is the 3% applied to the whole sum taken, or just the amount over and above ?

Just had this little notice appear… 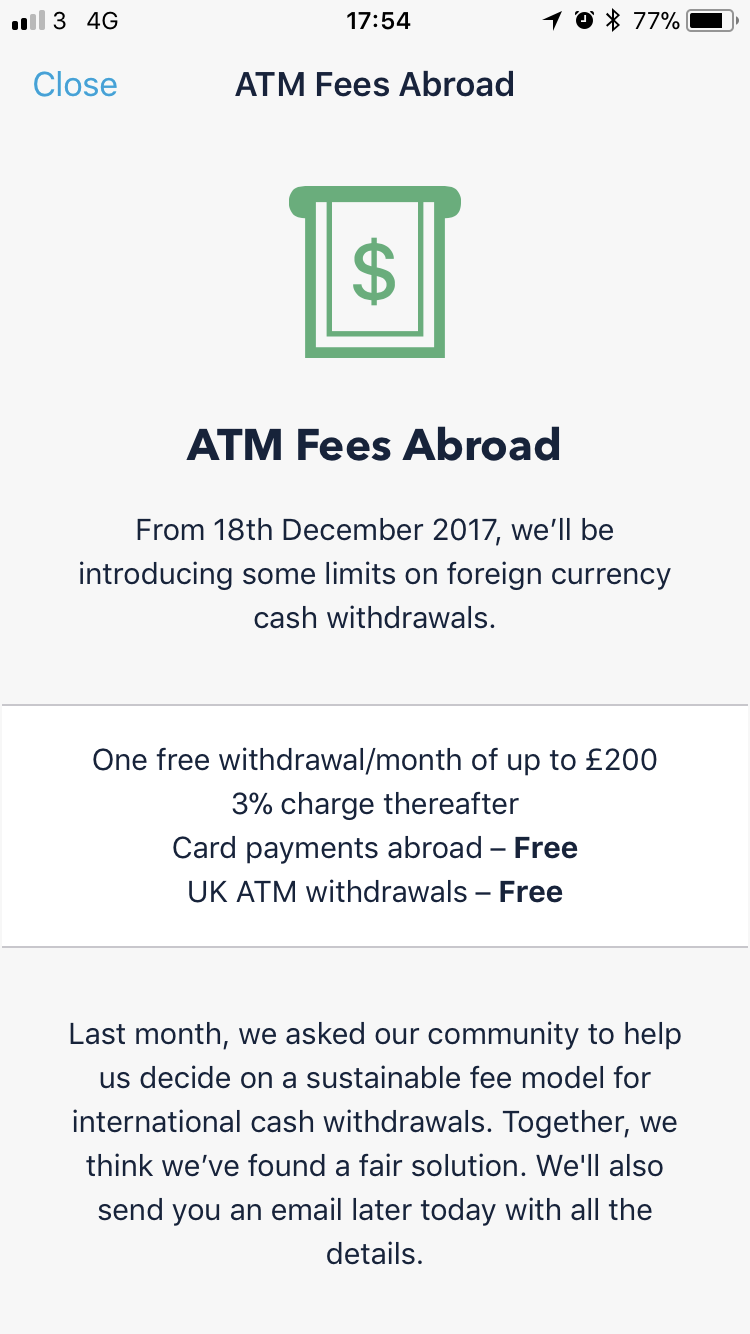 Wonder when the freeloaders will appear?

It appears if you log off and log back in on Android also appeared while merging as @DaveTMG said.